After five seasons, the Insecure cast is saying goodbye to the beloved show.

Issa Rae has been documenting the final days of filming the fifth and final season. On her Instagram Story on Thursday, she posted a video of herself getting emotional as they were nearing the end. On Friday, which was the last day for the creator and lead, it was very bittersweet.

“Today is my last day shooting #InsecureHBO. Said goodbye to some of my favorite people on Earth, on and off screen, this past week,” Rae tweeted, alongside photos of herself with Jay Ellis and Yvonne Orji. “Never imagined all the doors this would open. Forever grateful to those who paved the way for us to do us.”

Said goodbye to some of my favorite people on Earth, on and off screen, this past week.

Never imagined all the doors this would open. Forever grateful to those who paved the way for us to do us. pic.twitter.com/EUz6IOe85N

On her Instagram Story, she continued to share moments from Orji and showrunner Prentice Penny’s last day on the set.

Penny wrote a lengthy post alongside a photo of his last day, expressing in part, “Hella Over. ❤️ The way #insecurehbo changed my life is too incredible to sum up in a post. All I can say is I’m so thankful and grateful to my sister @issarae for trusting me with her baby. All of my love and gratitude for the other third of #3thehardway @msmelina. To my OG’s @yvonneorji @jayrellis making this little bitty show in Inglewood back in 2015 none of us had any idea, but we all fell in love with with each other immediately.”

Orji, on her end, posted memories on her IG Story as well, writing a sentimental post about her time on Insecure.

“Last night we said goodbye and God Bless to, not only Molly, but also to our fearless leader, @the_a_prentice. We cried a river, group-hugged, ate cake & popped multiple bottles,” she wrote. “I’m gon’miss the heck outta these beautiful people. This wasn’t just a show with some co-stars that I HAD to work with. This was a family that I was privileged to grow with, learn from, and do life with.”

“As we each move on to other projects, we know that we’ll always have this moment, this experience, these last 6 years. What a blessing. WHAT. A. MUTHA. EFFIN. BLESSING. #AllCriedOut #SittingDownAndRestingMySoulToday,” she concluded.

Ellis also took to Instagram Story to share moments of his and Orji’s time together, as he celebrated her last day on set. He joked about how they hated each other’s characters, the faces she gave him when he directed an episode, and how Lawrence and Molly only shared three scenes together over the course of the series. 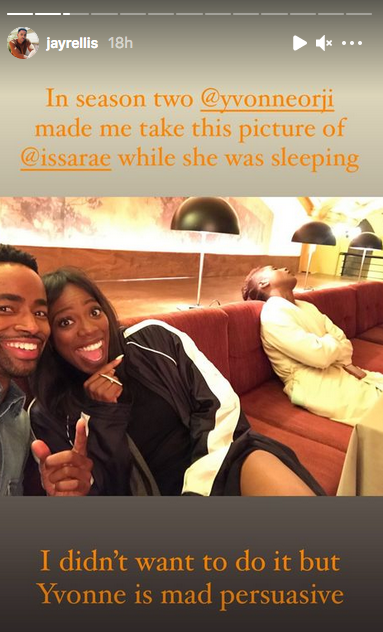 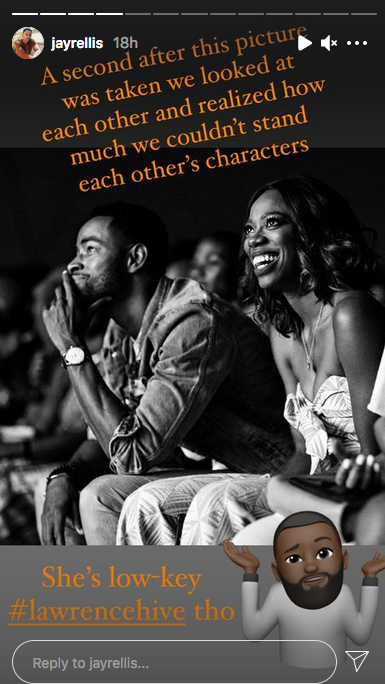 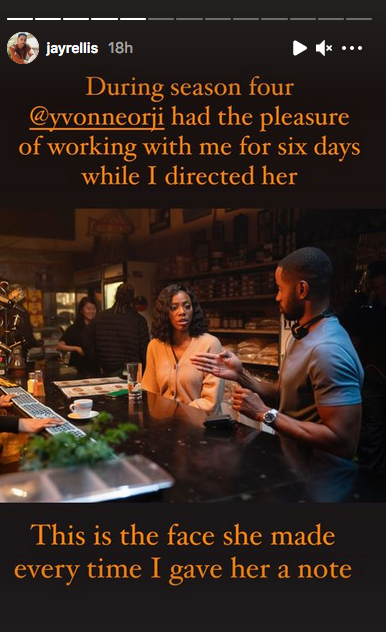 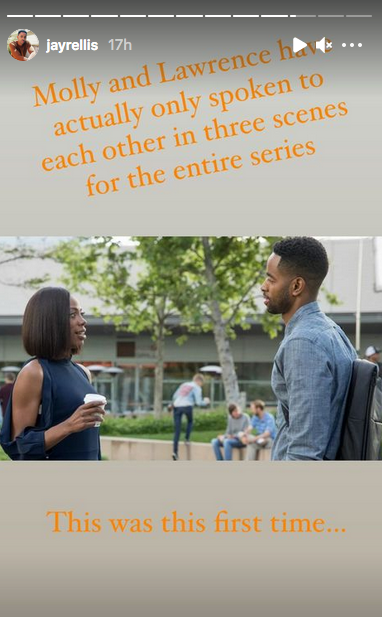 “If I could go back in time and tell her what’s in store for her, I wouldn’t because she wouldn’t f**king believe it… #grateful #InsecureHBO #Kelli #LastDay.” she wrote.

Amanda Seales also posted clips from her last day, writing, “From Diva to DuBois–onward and upwards! All my to love to those who brought love into these last 6 years♥️💎💅🏽.”

The last Insecure season left off with a major bombshell. As Issa and Lawrence rekindled their romance, it was revealed that Condola (Christina Elmore) was pregnant with Lawrence’s baby and she’s planning to keep it. Meanwhile, Issa and Molly’s relationship continued to be strained. Fans of the HBO series hope the two reconnect before the final episodes.

“That is what I would hope, you know, but life is messy,” Orji told ET last month. “You just have to watch and see, and see what relationships last and don’t. And sometimes with life, there’s some that don’t. … What I can say is life is messy and situations are complicated.”

Rae also previously told ET that the show would have a “mostly sweet ending.”

“But when people ask if shooting the season is bittersweet, I say it’s mostly sweet and the only bitter part is the fact that COVID is in place because it just doesn’t allow us to fully immerse ourselves in the experience and each other and you know, properly saying goodbye,” she explained. “And it sucks to go out like that during this, but things feel a little more optimistic. You know, I’m almost fully vaccinated, I’m hyped!”

See more in the video below. The final season of Insecure will arrive later in 2021.