This Morning’s regular presenters Phillip Schofield, 57, and Holly Willoughby, 38, were back on hand to host the show live from their London studios today. Across the globe however, former Coronation Street star Shayne Ward, 34, was in Maldives presenting the competition segment with some lucky holidaymakers, but viewers of the ITV programme back at home were a little dubious of the presenting style.

Viewers will remember the former Coronation Street star bowed out of the ITV soap last year as fan favourite Aidan Connor and has since gone on to appear in psychological motion picture, Stairs.

Today, the former X Factor champion was given the chance to dip his toe into the world of presenting but the segment didn’t go as smoothly as some possibly hoped.

In one particular moment throughout the course of the show, Phillip and Holly had lined up for Shane to take over reigns, but a time delay meant the hosts were met with silence.

Shortly after the competition presenter picked up from the feed from the London studio, he was very enthusiastic about the prize on offer to fans. 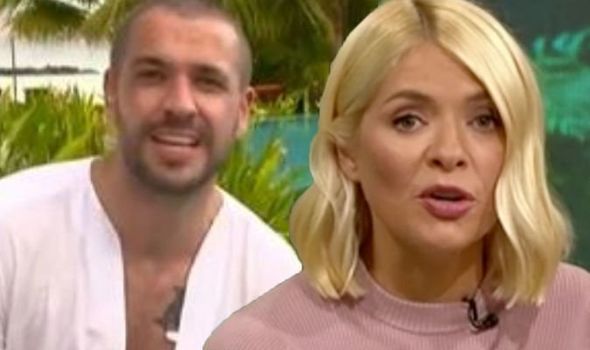 In another throwaway to the Maldives, the soap star was seen stood on a sandy walkway in the scorching sunlight.

Shayne told the hosts: “I’d take you onto the beach, but I have to stay on this wooden bit here, burning my feet,” as he was seen in shot standing by the side of a pool with some holidaymakers.

Back in London, Phillip explained the presenter was having to stay in the given position as it was the only place the team could get signal from.

Viewers quickly took to Twitter to comment on the Coronation Street star’s presenting role and didn’t hold back in voicing their thoughts.

One wrote: “Anyone else cringing at Shayne Ward pimping the competition?”

Whilst a third remarked: “These Shayne Ward competition segments are some of the worst i’ve seen, very disorganised and messy #thismorning.”

Over on sister show Loose Women however, it seemed the live feed was in fine working order as they also shared details of the competition, which included a holiday to the tropical destination.

However, former I’m A Celebrity…Get Me Out Of Here! champion Joe Swash, 37, was on hand to present the segment and interacted with the guests included in the link.

During last week’s Friday edition of the show, hosts Ruth Langsford and Eamonn Holmes, both 59, announced a departure from the show.

It was revealed at the end of the programme one of the producers, Lucy Johnson, had just completed her last stint with the team.

Eamonn began the emotional goodbye by saying: “It’s daunting for Ruth and I to think of doing this program again without our producer Lucy Johnson who says goodbye.”

The host continued: “She says goodbye to us after eight years – it just seems much longer.

“Anyway Lucy is moving on to new challenges in the TV industry.

“We look forward to seeing you in TV land once again some day! But thank you Lucy for this show, and thank you for watching!”

Both Eamonn and Ruth then thanked their team member once more and  wished her the “best of luck” in her new venture.

This Morning airs weekdays at 10.30am on ITV.

Is there a Backstreet Boys UK tour, are they releasing a new album and what are their hit songs?

Jason Momoa: “I don’t say a lot of things or use big sentences. I’m not ‘very smart.’”