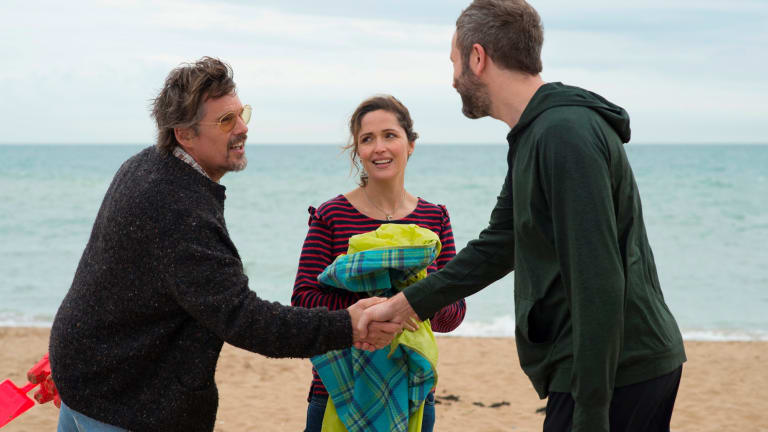 Ethan Hawke, Rose Byrne and Chris O’Dowd in a scene from Juliet, Naked.

Somewhere in the world, there's a guy in his basement with a wall covered with pictures of the 1980s American indie band Lemonheads. This guy knows everything about them, including that the founding bass player was Jesse Peretz​. 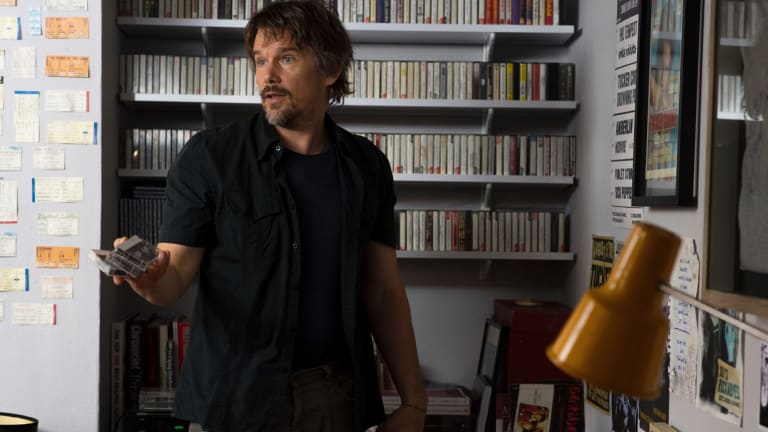 Ethan Hawke in a scene from Juliet, Naked.

Fast forward 30 years: there's a guy in the basement of a seaside town on the east coast of England who runs a website devoted to the work of an obscure (fictional) American singer, Tucker Crowe (Ethan Hawke). Crowe made a couple of soulful and under-appreciated albums 20 years earlier. Then he burned out and disappeared.

For Duncan (Chris O'Dowd), Tucker Crowe said it all. He runs a website that caters to the 200 other weird guys around the world who agree. His girlfriend Annie (Rose Byrne) does not share his interest. Tucker Crowe's artistic output bores her silly; so does Duncan, although she has not yet admitted that to herself.

It's easy to see how Peretz, who went on to become a director of film and television (Girls, Nurse Jackie, Our Idiot Brother), would respond to the 2009 novel by Nick Hornby. Hornby takes a satirical stiletto to the mentality of the obsessive fan, then twists the knife: the mysterious Tucker Crowe sends Annie an email. He doesn't know she's living with his nightmare "biggest fan". Tucker just likes the way she trashed one of his early albums on Duncan's website. They begin a trans-Atlantic email relationship, as Annie and Duncan hit the rocks. It's inevitable, of course, that Tucker will cross the pond at some point.

The arrival of a film based on a Hornby book was once greeted by fanfare, but this one arrives unpreviewed. Few contemporary novelists have had more books adapted to film, mostly successfully. He's also a screenwriter, adapting other people's work, as with Lynn Barber's memoir An Education. He's fascinated by the mindset of the fan, whether it's football (Fever Pitch) or music (High Fideility). 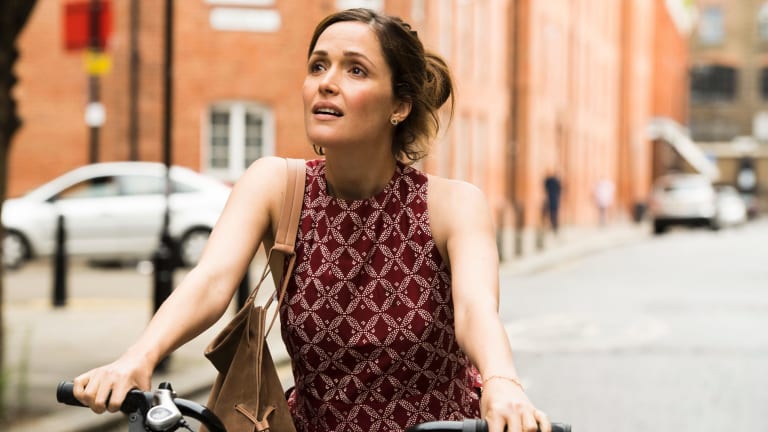 O'Dowd's performance here is so good it threatens to steal the focus, which is supposed to be on Byrne's portrayal of a woman nearing 40, who discovers she has wasted 15 years of her life. Tucker Crowe is attracted to her because he did the same thing, with sex and drugs and rock'n'roll. Still, they are yin and yang: she wants a child, he has five, one of whom he has never spoken to.

The film is less than it should be with this cast and pedigree, but there's plenty to like. It's dense with contemporary ideas and humour but dramatically fuzzy. The internet has empowered the obsessive fan, just as it allows the sad and lonely to escape isolation, at least in theory. The internet allows Annie to fall in love with a man she has never met; it also allows Duncan to find the guys who share his fanboy obsession.

It may be that Peretz connects to this background too directly, causing him to neglect Byrne's character in the foreground. She's supposed to be recessive, the quiet girl who needs to come out into the light, but there's something a little too recessive in the first half. Why is she with the bullying Duncan in the first place? Even though she narrates the circumstances of her own life, which would normally hand her the reins of the film, she comes across as pallid, almost translucent on screen. The early scenes needed more blood.

That arrives when Tucker Crowe comes to England. The comedy becomes sharper and edgier, the themes deepen. Hawke, always an engaging presence, has more to do, as Tucker's flock of angry children and ex-wives gather to peck at him. There's a hilarious dinner scene, in which Duncan finally gets his chance to tell Tucker what his music really means. Tucker tries to let him know how wrong he is about most of the "facts" of the singer's life.

Even if it's one of the lesser Hornby adaptations, it's still engaging and intelligent about the human condition. Turns out the old saying that it's never good to meet one's heroes can go both ways. Meeting one's fans can be much worse.

Beat joint discomfort with the most studied turmeric supplement