The political fortunes of Kiefer Sutherland’s Designated Survivor have had an 11th hour reversal courtesy of Netflix.

The streaming service has jumped to yet another cancelled show’s rescue by ordering a 10-episode third season of the political drama with Under the Dome‘s Neal Baer taking over as the series’ record-breaking fourth showrunner, after it was cancelled by ABC this past spring.

Netflix had been widely tipped as a possible home for Designated Survivor when production company Disney-ABC Studios first started floating the possibility of a revival at another channel or streaming service.

Netflix has said that the third season will revolve around President Kirkman’s administration facing the realities of “campaigning, smear tactics, debates, campaign finance and ‘fake news'” during a re-election bid.

“I am thrilled to have the opportunity to play President Kirkman for season three of Designated Survivor on Netflix,” Kiefer Sutherland said in a statement.

“I believe this format will allow us to continue to delve deeply into storylines and issues concerning the American electorate that were not previously possible.” 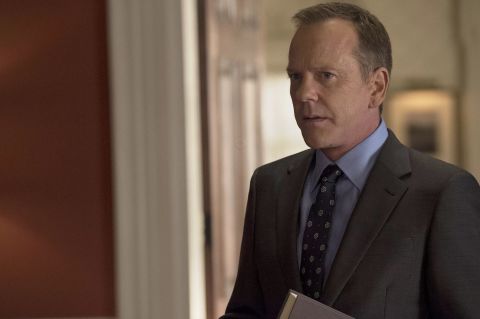 The third season of Designated Survivor is currently projected to arrive on Netflix next year. There’s no word yet how this deal will impact the show airing on the Paramount Network in the UK.

“The continuation of the show via Netflix is a win-win for all involved,” executive producer Mark Gordon said.

“The story of President Kirkman and those around him has not been fully told and we look forward to working with our new partner in continuing the show for a global audience.”

Sutherland’s long-time series 24 is also currently being revived at Fox in the US, but the actor is not currently expected to return for what is being described as a prequel.