I STILL have to pinch myself about the time I met Kris Kristofferson in an underground car park.

No posh London hotel for the bearded hunk who once held Barbra Streisand in a semi-naked clinch. 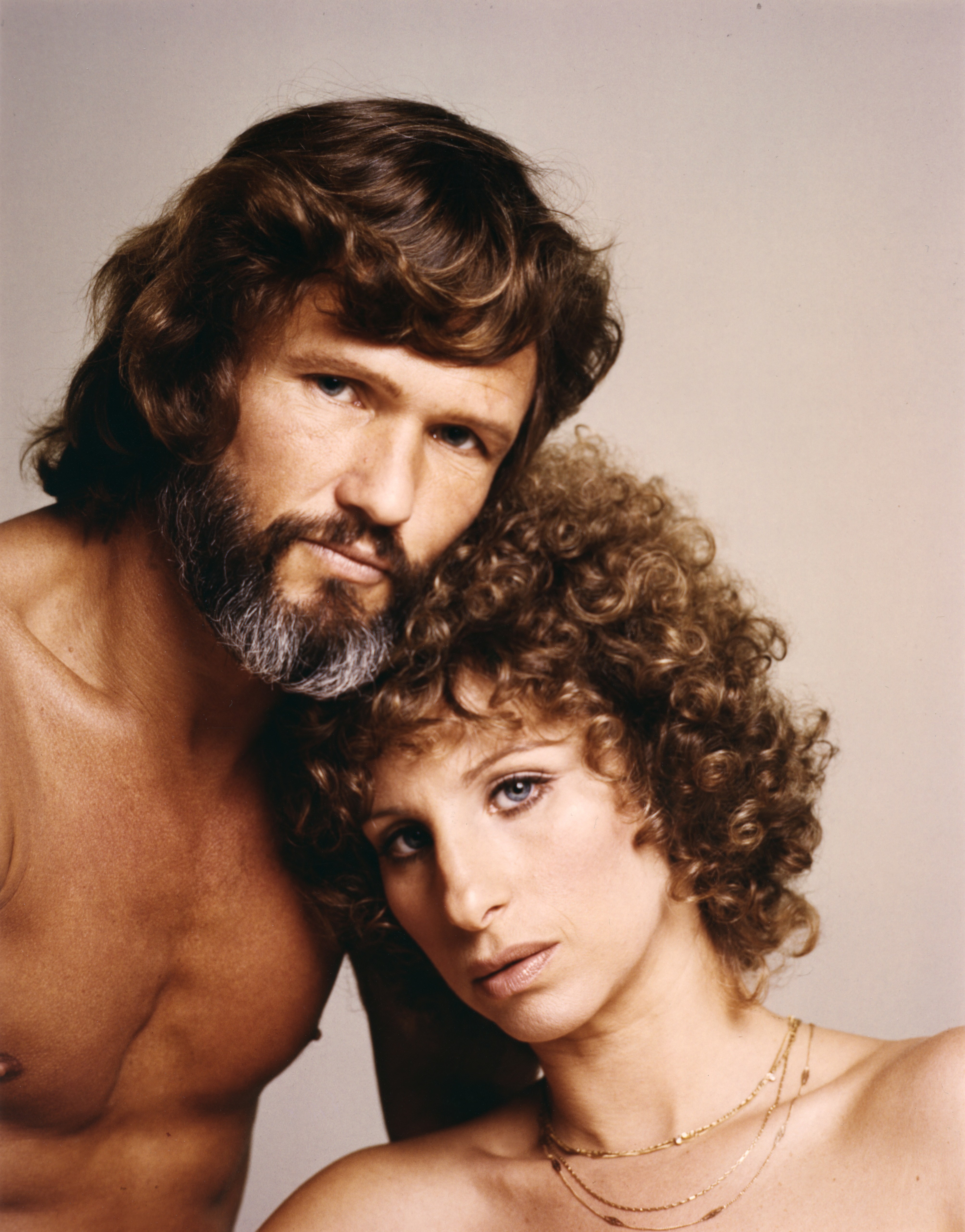 He was spending the night on a tour bus, parked in the vast, dimly lit bowels of Tesco’s Kensington superstore on Cromwell Road.

I remember climbing the steps of the long black vehicle to be greeted by a firm handshake and a fixed stare from those piercing sky-blue eyes.

Already in his seventies but still blessed with rugged good looks, Kristofferson was dressed down in checked shirt, jeans and cowboy boots.

There was an intimate, dishevelled feel to his narrow living space, including a half-empty bottle of bourbon on the small table.

Over the next hour or so, the humble, humorous and very human Kristofferson regaled me with anecdotes in his warm, lived-in drawl.

“I have always been proud of that one,” he said of the 1976 incarnation of A Star Is Born. “But I give most of the credit to Barbra.” 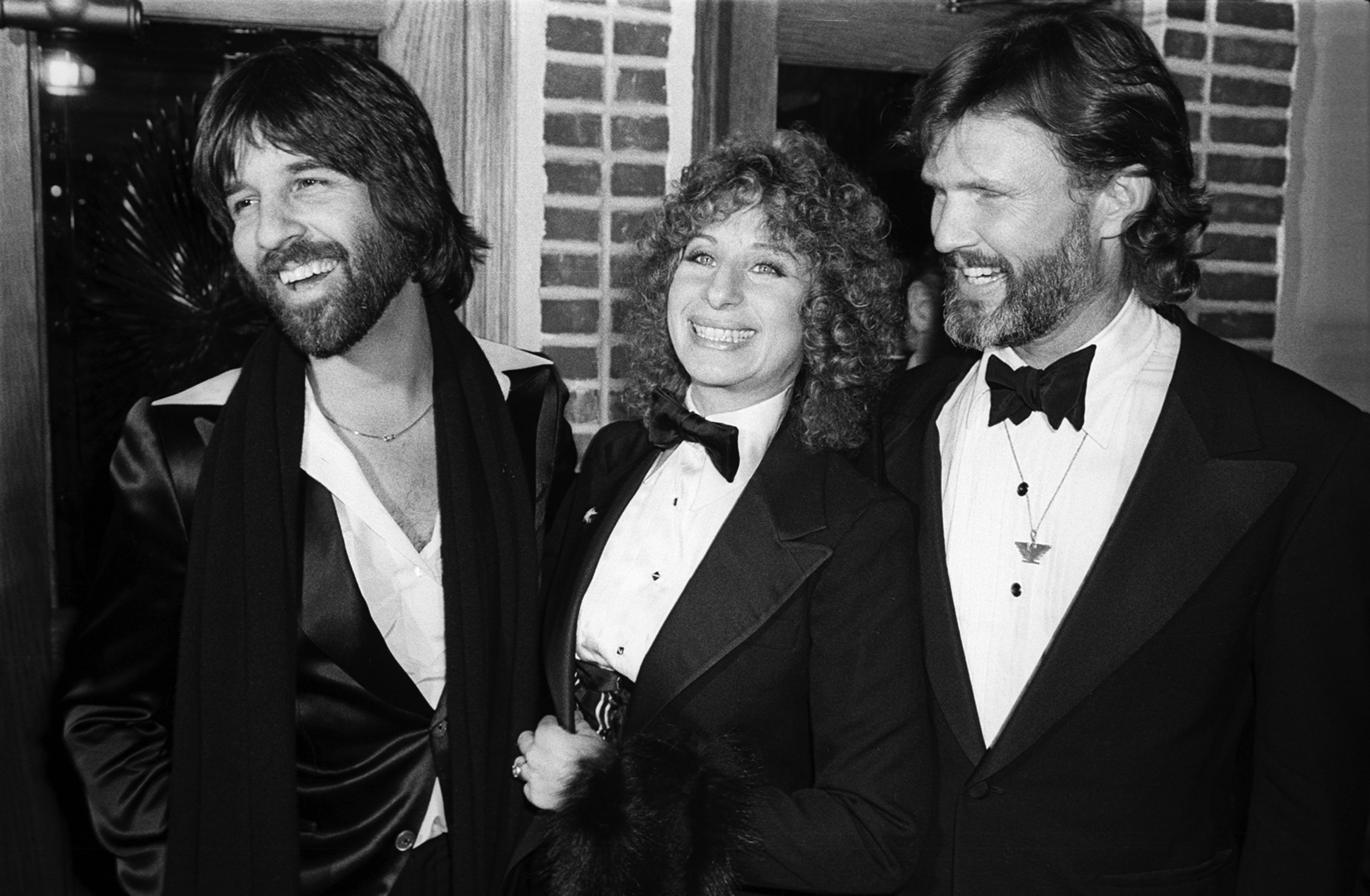 Because of a publishing issue, Kristofferson couldn’t perform his own material for the role of a washed-up rock star.

“I had to sing other people’s songs that I couldn’t identify with,” he added.

“I thought the love story part worked, though, and the movie lifted me into a whole different tax bracket.

“My music got more attention after A Star Is Born and that helped support me and my band during the lean years.”

Kristofferson empathised with the hard-drinking side of the character he portrayed.

“I don’t think I could have gotten up on a stage if I hadn’t had Dutch courage,” he told me.

“The first time, I think, was when John (his mentor and friend Johnny Cash) put me on at the Newport Folk Festival. 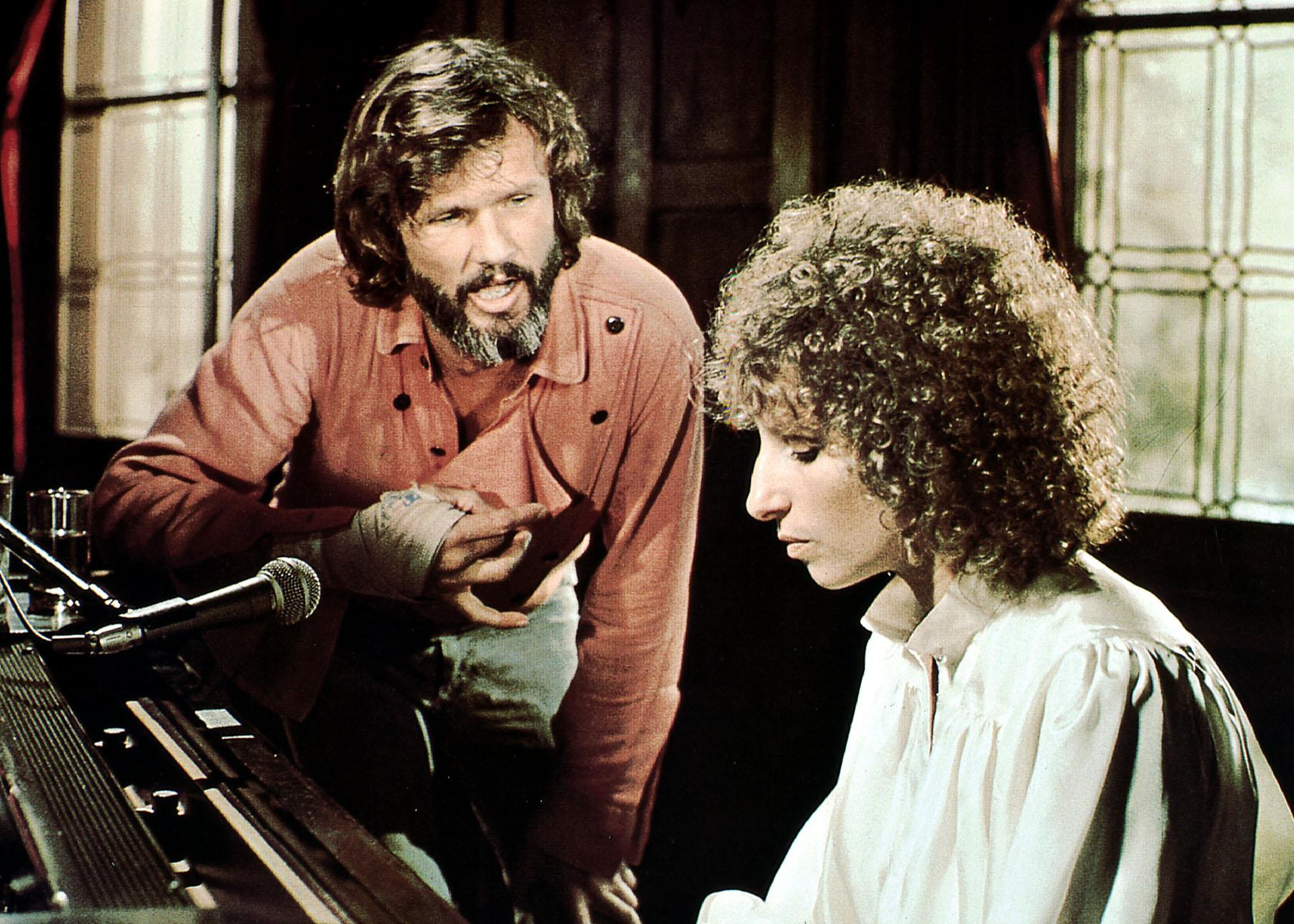 “Everybody was trying to keep me from drinking but I snuck a couple of drinks.

“There was no way I’d have gotten out there without them.”

On the back of A Star Is Born, Kristofferson starred in Sam Peckinpah’s box-office smash Convoy, complete with its ridiculous theme song. (“Ah, breaker one-nine, this here’s the Rubber Duck” etc.)

Kristofferson said: “It wasn’t Sam’s best but it was popular around the world. They loved the big trucks in China and South America.

“I recall telling my band, ‘Well, it looks like I’m going to spend the next few months stuck in a truck with Ali McGraw’.

“My guitar player said, ‘That beats whatever I had planned!’ ”

I decided to revisit my subterranean chat with Kristofferson, now 83, because it is 50 years this month since his debut album appeared . . . his real-life A Star Is Born moment.

The simply titled Kristofferson showcased exceptional songwriting skills and bore some of his best-known compositions. 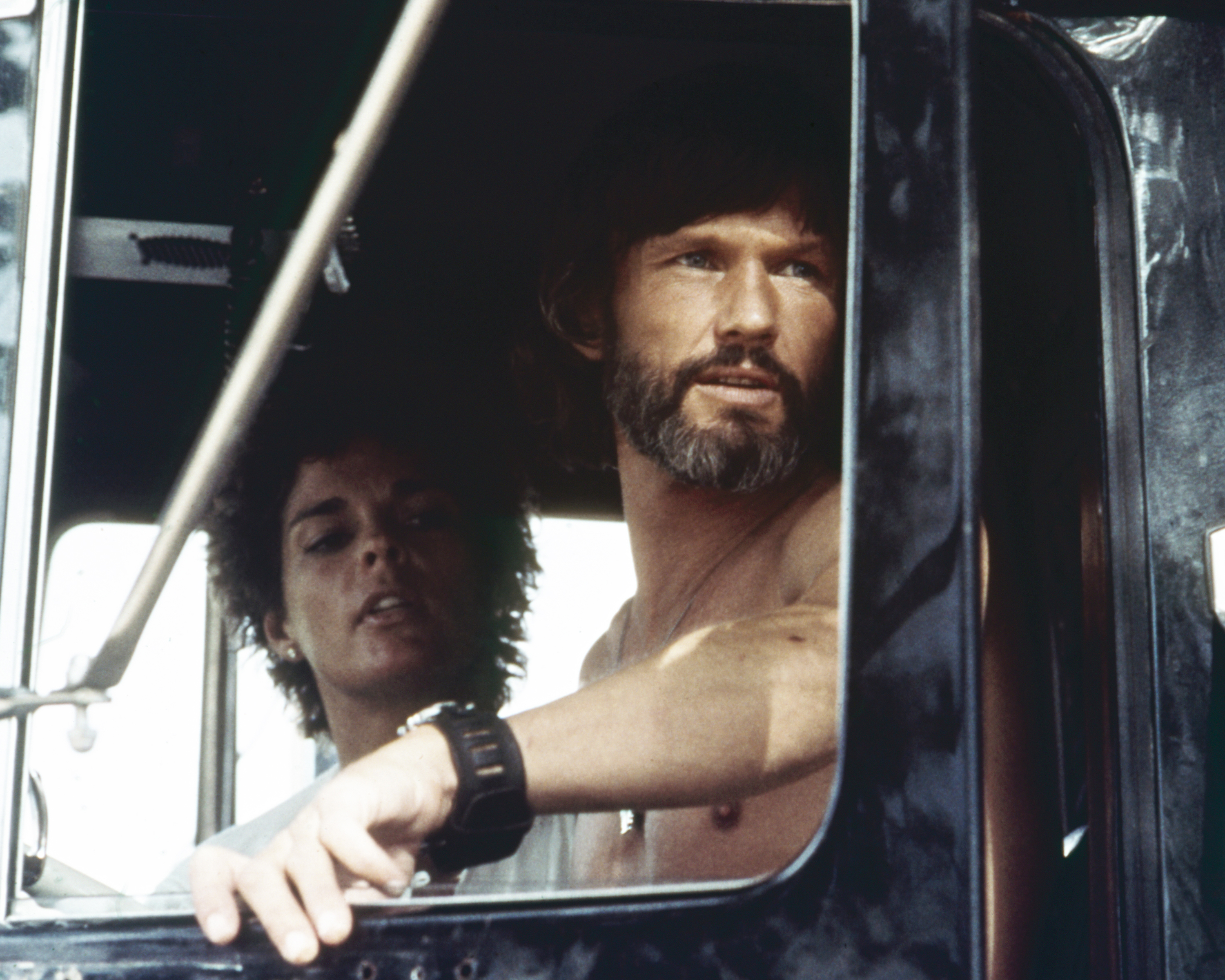 Among them were Me And Bobby McGee, a huge posthumous hit for his brief date Janice Joplin, Sunday Mornin’ Comin’ Down — the ultimate hangover song — and Help Me Make It Through The Night, a tender paean to sexual intimacy.

To understand the man, you need to know why Kristofferson didn’t make a record until he was 33.

Born into a military family in Brownsville, Texas, his dad ascended the ranks to become a major-general in the US Air Force.

Initially, the handsome, athletic Kristofferson was the apple of his parents’ eyes.

He excelled in sport, playing American football and rugby union at a high level.

He even earned a Rhodes Scholarship to Oxford University, where he was awarded a blue for boxing.

All the time, he was developing a love for music and one day it became his calling. 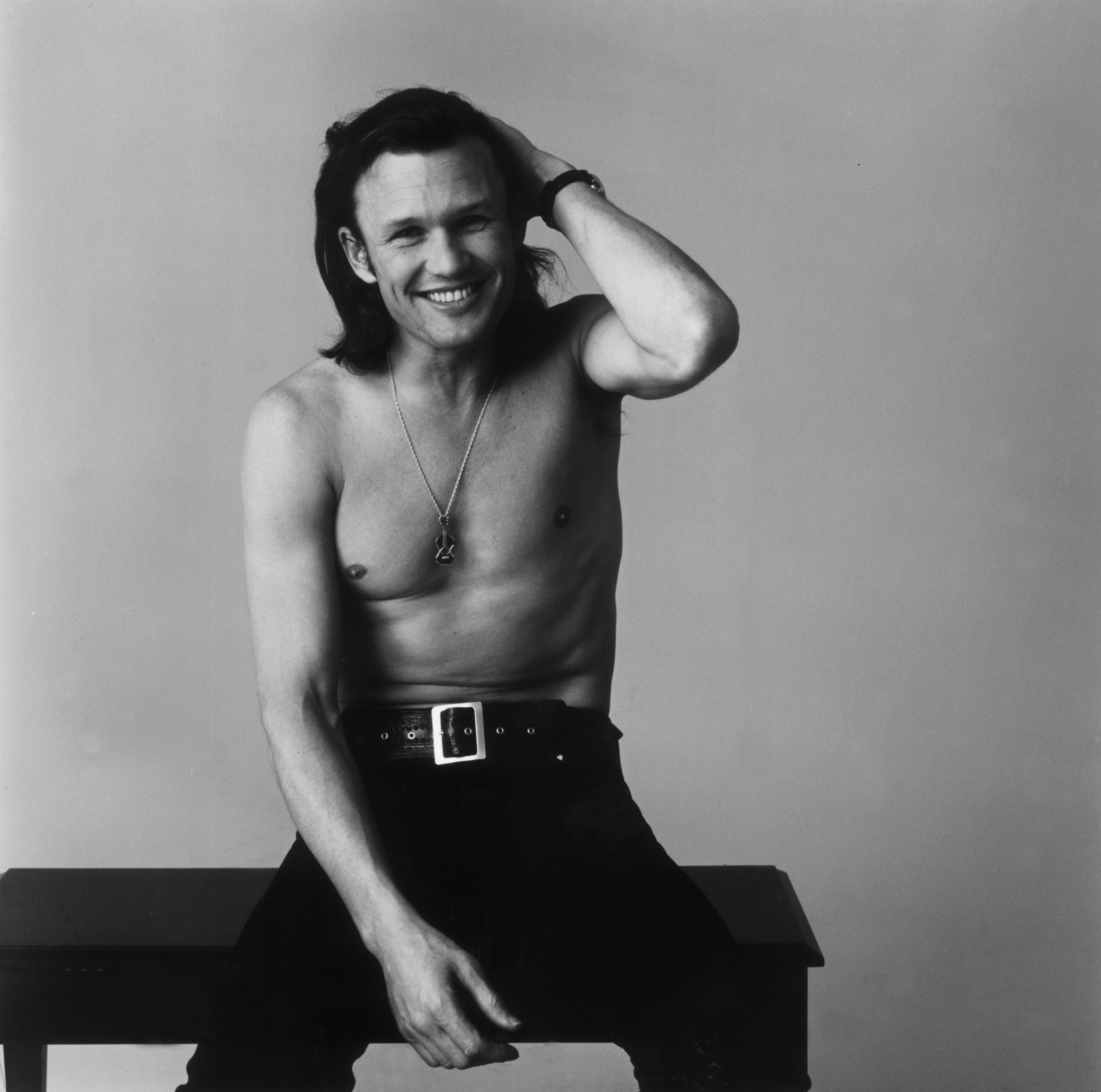 “I was still living in Texas when I made up my first songs,” said Kristofferson.

“Hank Williams was my hero. I liked him before anyone else.

“From the first time I heard him sing Lovesick Blues, I was hooked.

“It was his voice that killed me, with the heartbreak and sadness right there.

“I’ve never really figured out how those things can give you pleasure.”

Later, while in Britain studying English at Oxford’s Merton College and demonstrating his prowess on the sports fields, Kristofferson answered an ad that read: “DIAL FAME.”

It led to a session with, of all people, Tony Hatch — the man who wrote the cheesy theme tune for long-defunct TV soap Crossroads.

“I was made aware I didn’t have a commercial voice.”

After that, Kristofferson got married and flew helicopters for the US Army, achieving the rank of captain, but soon chucked a military career to follow his music dream. 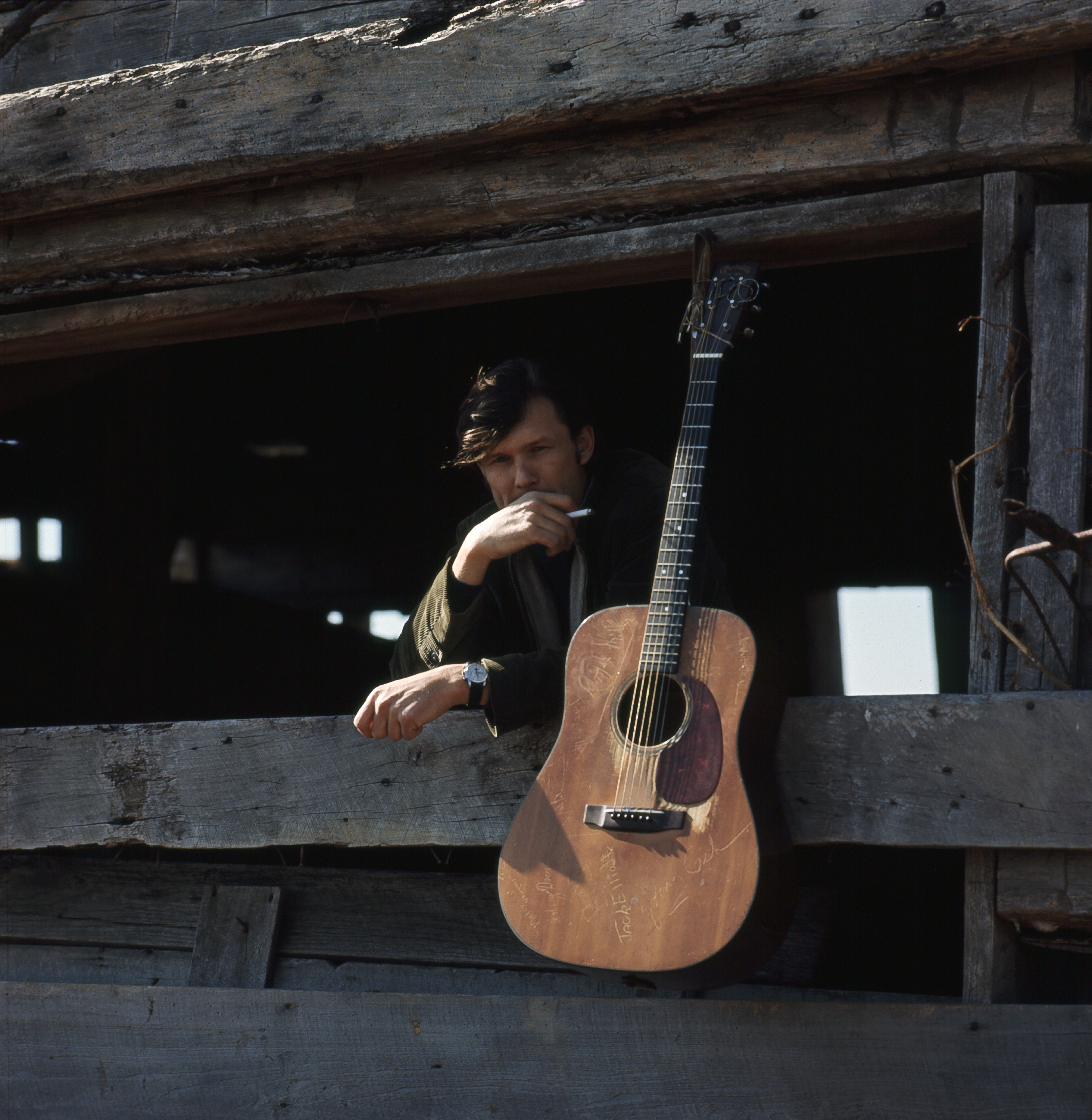 He was emboldened by a fleeting backstage meeting with his other idol, country superstar Johnny Cash.

“I’m sure he didn’t remember it,” Kristofferson said, “but to me that moment was electric. He was everything I expected.

“He was skinny, eating a soda cracker and looking like death. I just shook his hand.

“He was my hero and he became my champion. Once I got to know him, he always encouraged me.”

With Cash as his inspiration, Kristofferson headed to Music Row, Nashville, starting out doing menial work at Columbia Studios while hoping to get his songwriting noticed.

He flew commercial helicopters in the Gulf of Mexico to supplement his meagre income and was disowned by his straitlaced parents. 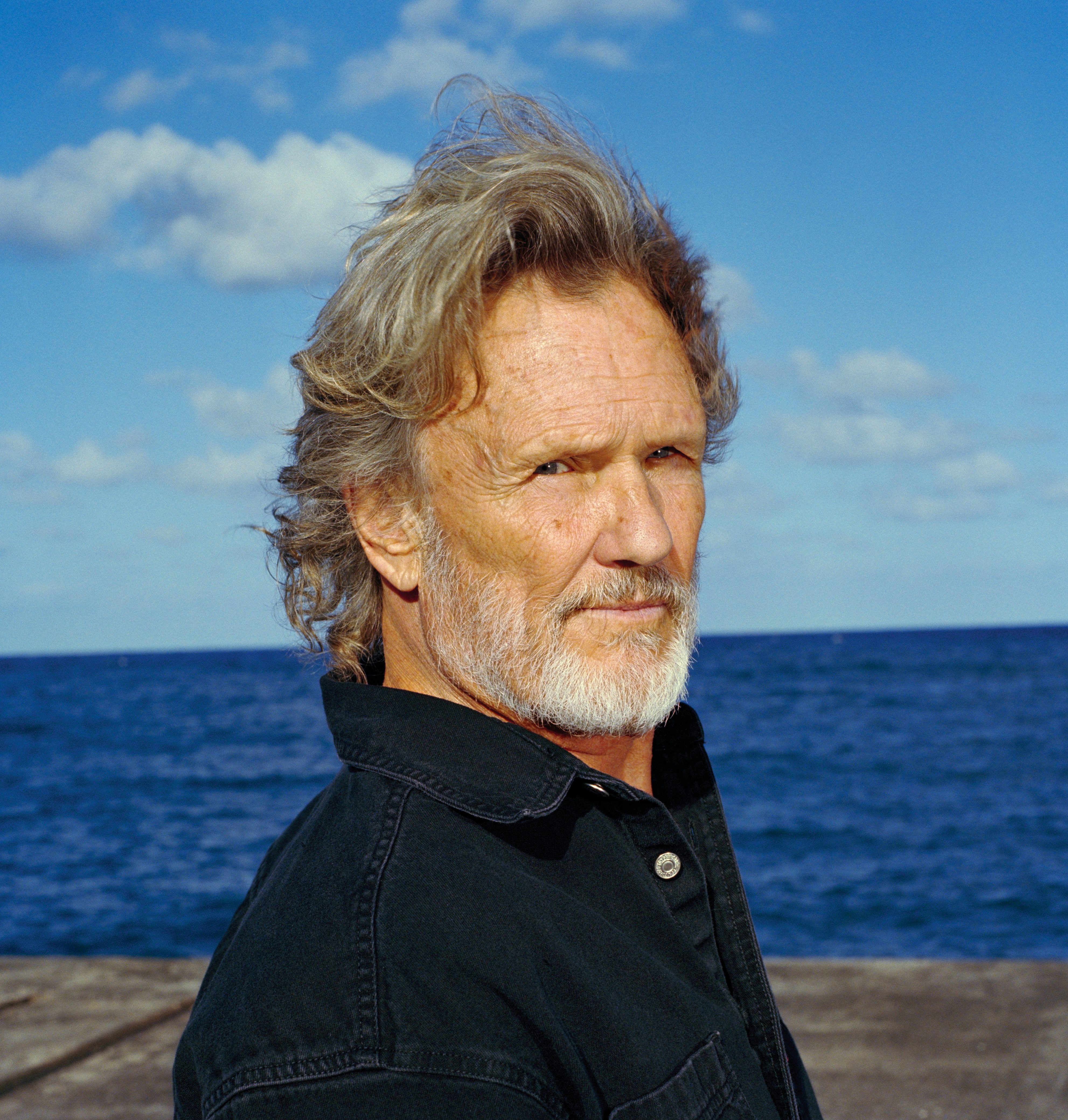 “I got a letter from my mother saying, ‘We thought it was cute when you were a kid and idolised Hank Williams.

“Now you’re a grown man and you idolise Johnny Cash, who everybody knows is a drug addict’.”

Cash got to see that crushing note and joked: “It’s always nice to get a letter from home.”

Today, of course, The Man In Black is remembered as an American icon.

“To think that John was on the cover of Time magazine when he died and considered a father of the country . . . his face should be on Mount Rushmore.”

When I spoke to Kristofferson, Cash and his wife June were already five years dead.

Another great character, Waylon Jennings, was gone too.

He said: ‘To see your heroes falling around you . . . I wish I’d known how short the time is.” 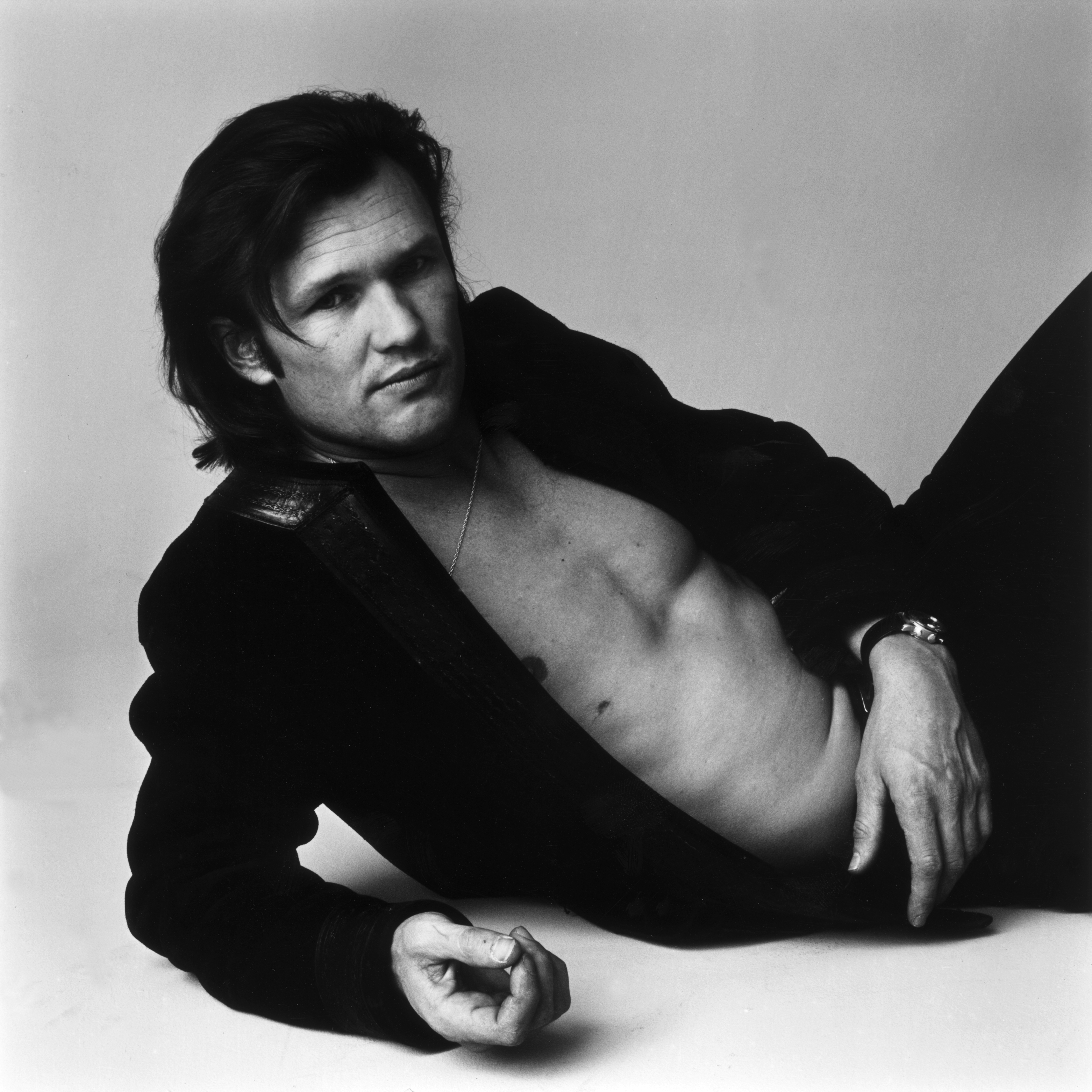 We returned to 1966 when Kristofferson had another pivotal experience.

The so-called “spokesman of a generation” Bob Dylan bowled into town to record his seminal double album Blonde On Blonde.

“I was the janitor, the studio set-up man,” he explained.

“I supplied the tapes, emptied the ashtrays and swept the floors.

“But I was at the sessions — even though they were closed to virtually everybody. In fact, they had police around the studio keeping people out.

“That exposed me to music, to songwriting, to performance.

“Before Dylan, songwriting wasn’t nearly as artistic, more Doggy In The Window. All of a sudden, he lifted it up into poetry.”

Kristofferson first got noticed for his song Jody And The Kid, performed by Roy Drusky.

“Not a big hit but it got the attention of other writers.” 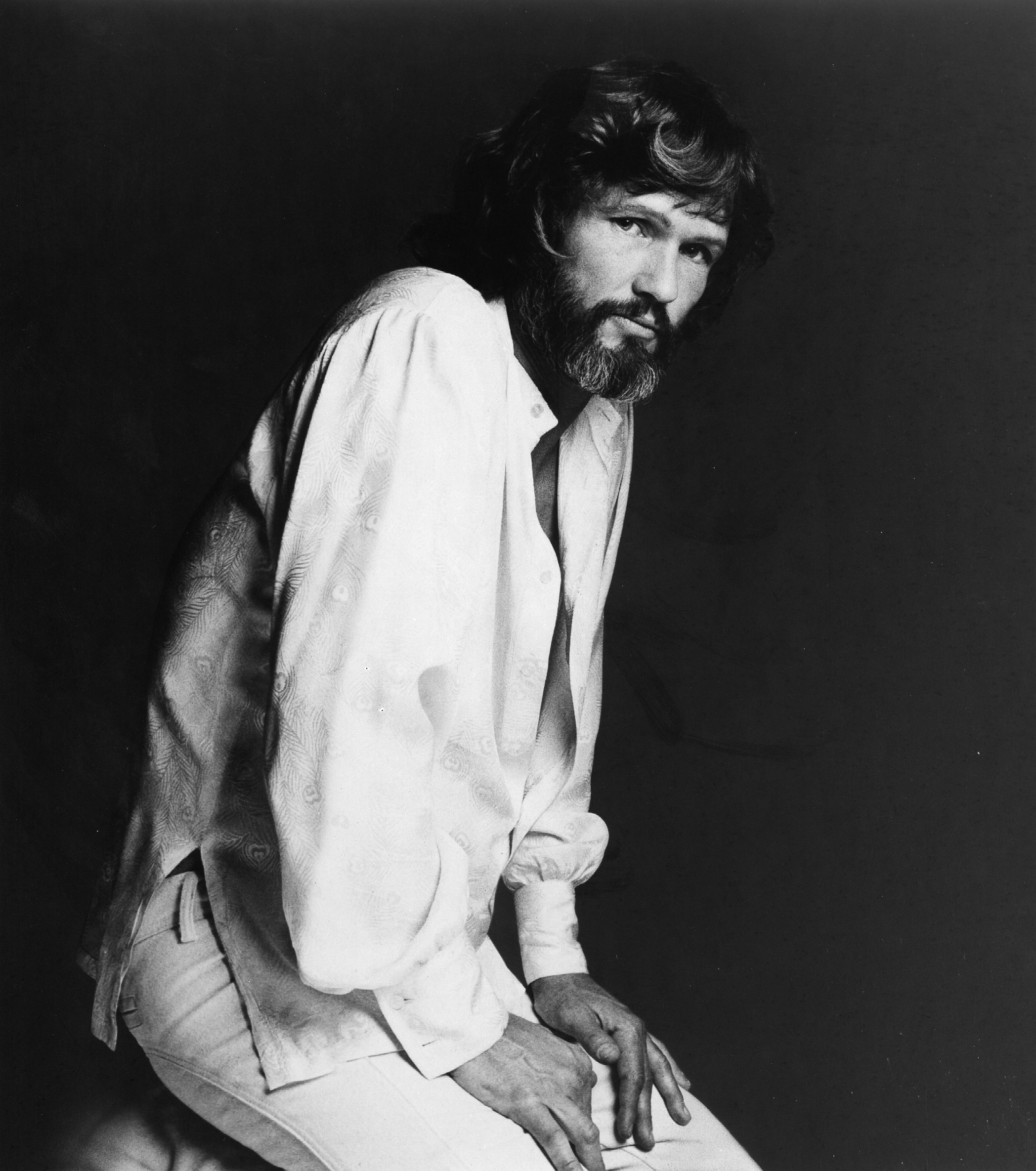 He recalled that Danny Dill, for one, loved it.

“When he heard the song on his car radio, he pulled over to the side of the road and cried. And this guy was a real gruff, mean old son of a bitch!”

As Kristofferson finally started getting somewhere, his marriage to first wife Fran crumbled.

“My family fell apart because I just wasn’t home,” he said.

“My wife stayed as long as she could stand it but then she left.

“She didn’t see the glory of this ‘awful’ place I was living in.”

In 1969 the great songs started flowing, including Sunday Mornin’ Comin’ Down.

“Ray Stevens was first to record it but they didn’t market it properly. It probably would have died if Cash hadn’t done it.” 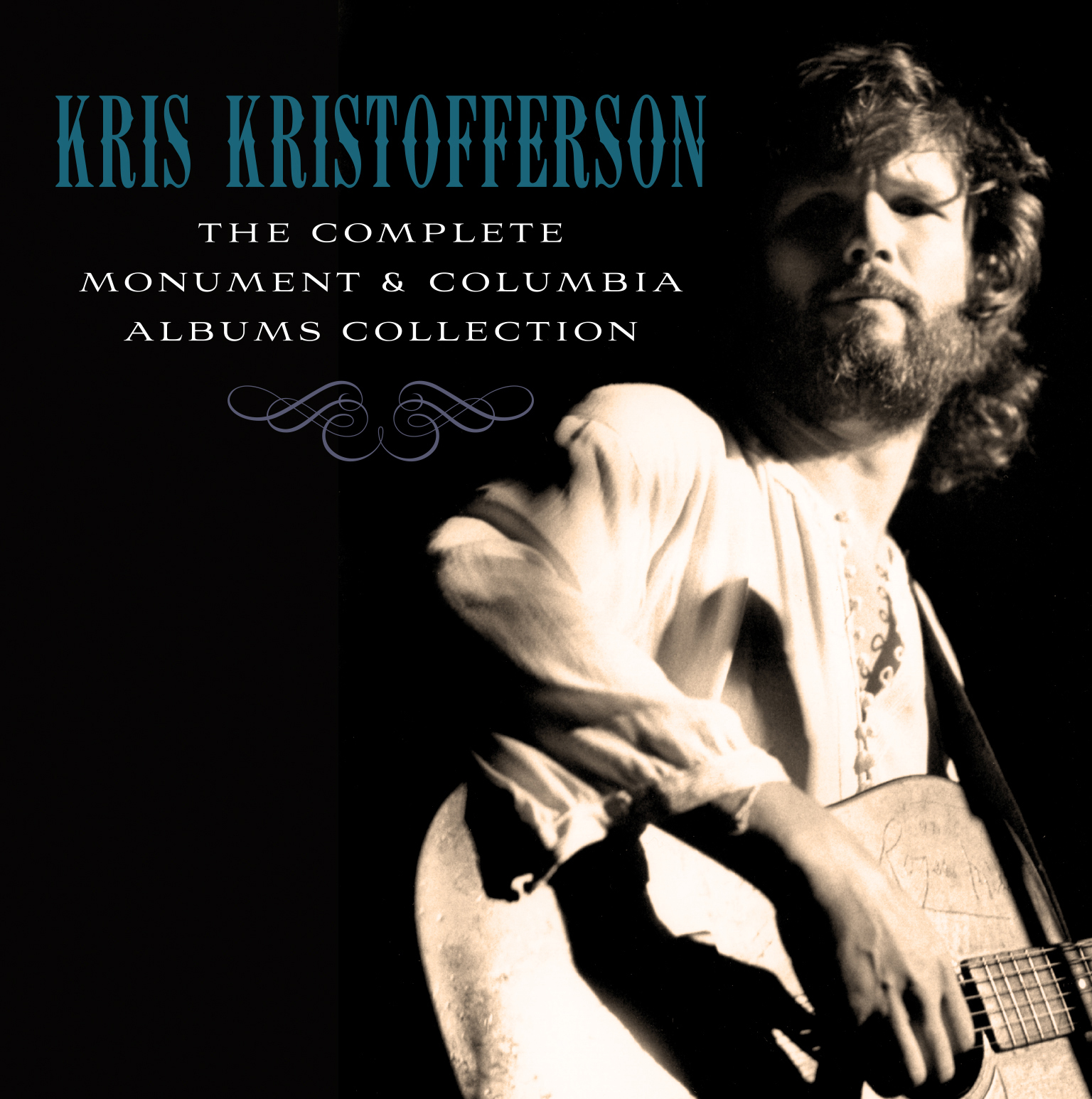 Then Roger “King Of The Road” Miller scored a hit in the country charts with Me And Bobby McGee.

And in spring 1970 Kristofferson hooked up with wayward but amazing blues singer Janis Joplin for a short fling.

She became smitten with the song and recorded the definitive version a few days before her death at 27.

It went to No1 on the Billboard chart a few months later.

Kristofferson said: “I didn’t know she’d cut it even though we’d lived together for a couple of months.

“I had just started performing, so we’d gone in different directions.

“I was up at Joan Baez’s house in Monterey and she told me Janis had passed away.

“I went down to the LA motel where she died and met her producer, Paul Rothchild (known for The Doors). 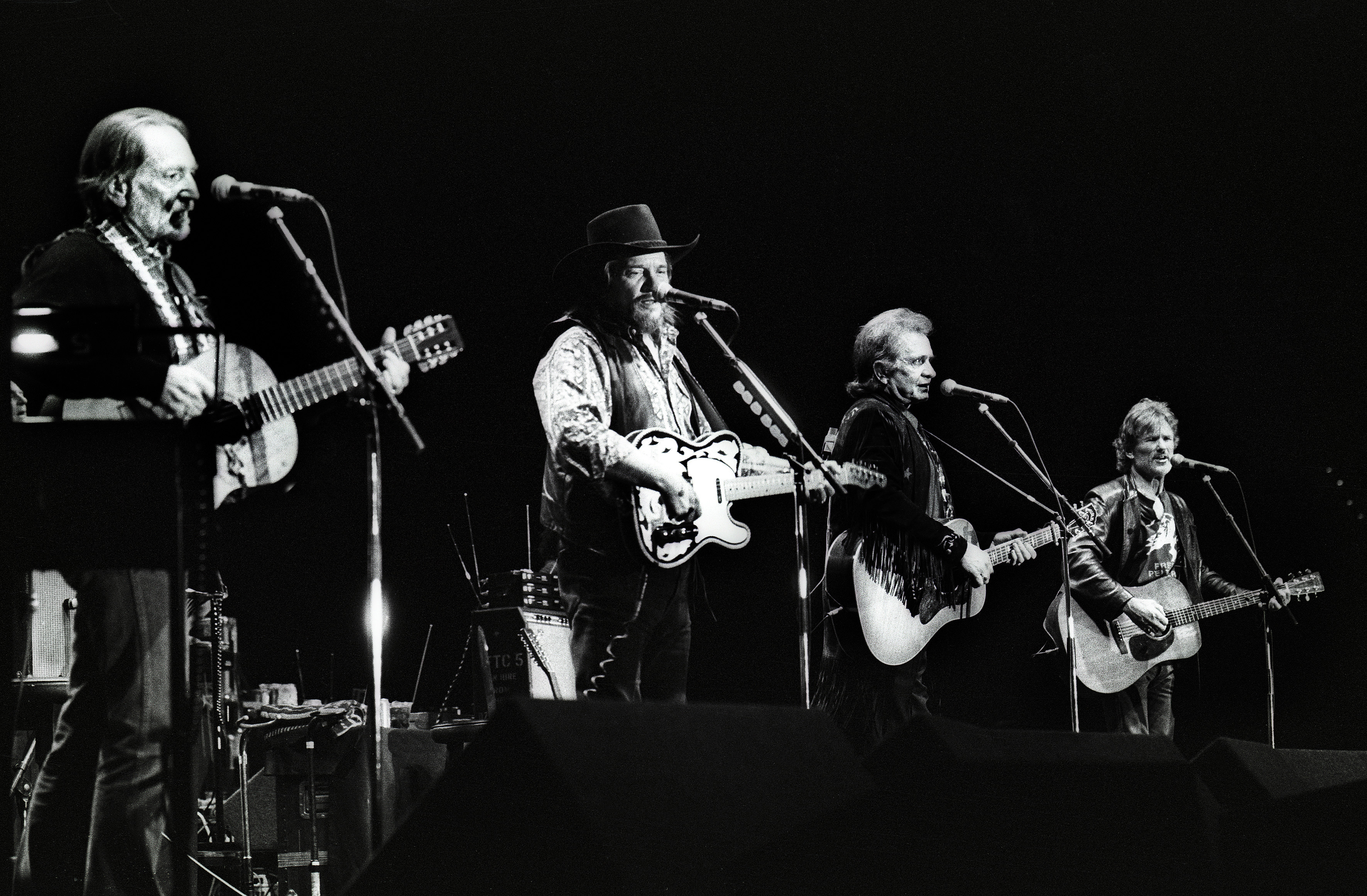 “He said: ‘Come by my office, I want to play you something’.

“It was Janis singing Me And Bobby McGee. I couldn’t even stay to the end. It tore me up.

“Janis was sad but very funny, very smart. One of the most soulful singers I’ve ever heard.”

The year the world lost her was the year Kristofferson made his first album, setting him on the road to stardom.

In the Eighties, he became a member of country supergroup The Highwaymen with Johnny Cash, Willie Nelson and Waylon Jennings.

“I didn’t think I was in their class as a performer,” he said. “My songwriting is what got me there.

“Back when I was a janitor, if I’d known that one day I would be standing on stage with those guys, I’d have died and gone to heaven.”

And with that, I took my leave of Kristofferson and his tour bus . . . with a priceless slice of music history.

2. Me And Bobby McGee

3. For The Good Times

4. Help Me Make It Through The Night

7. Jesus Was A Capricorn

9. The Best Of All Possible Worlds 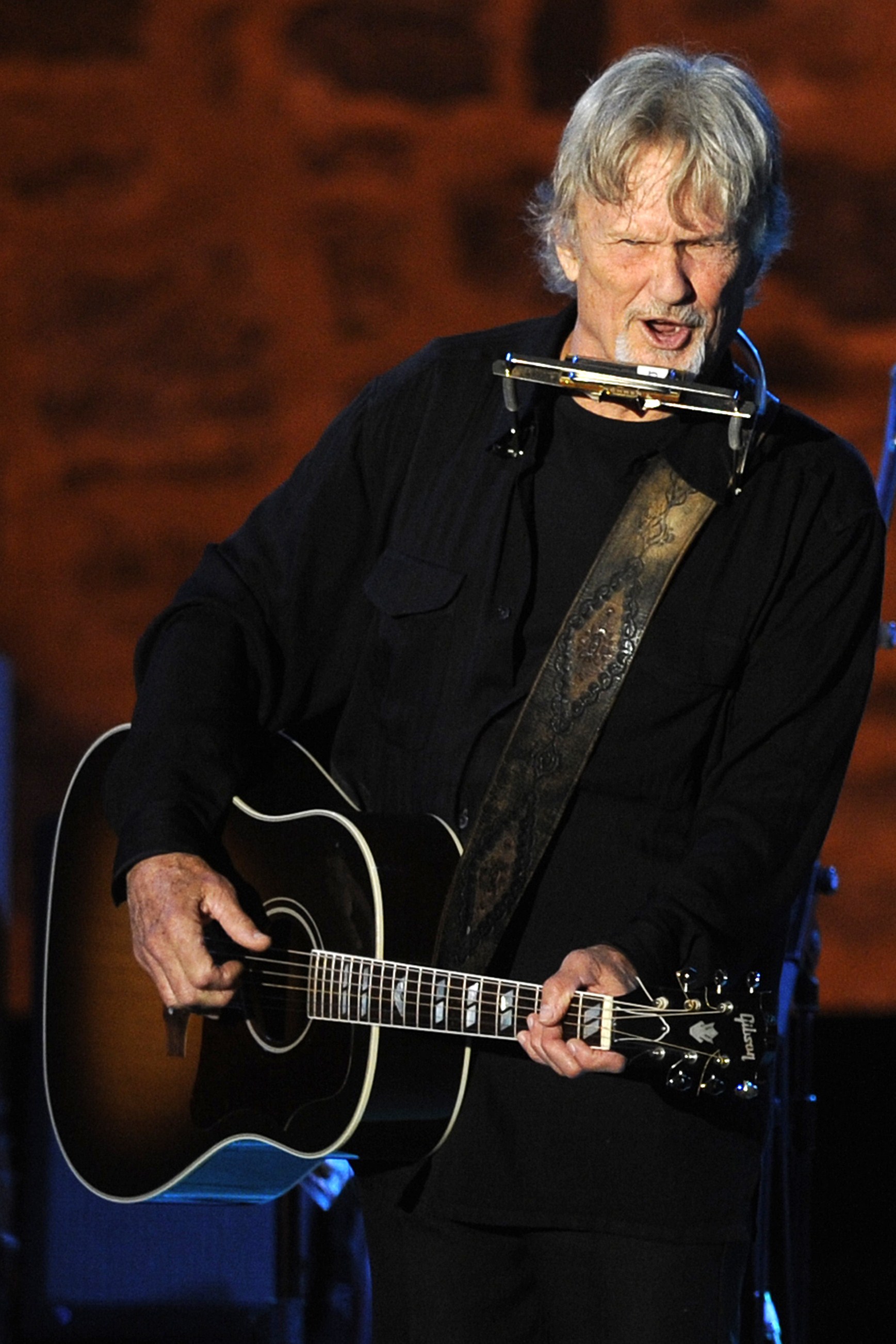 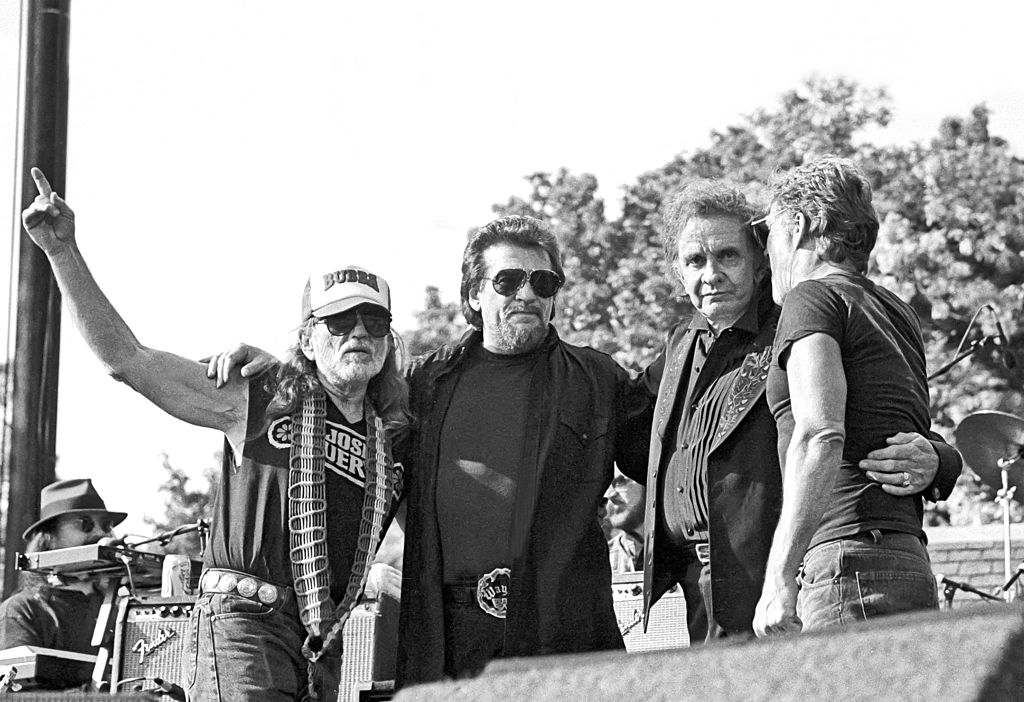 Social Security changes that may be coming for 2023

Twelve workers at a Wetherspoons in Liverpool test positive for Covid