Sydney was a very different place in 1959. Robert Menzies had been prime minister for a decade, television networks were trying out such innovative afternoon shows for stay-at-home mothers as Let's Make Clothes and About Your Garden, and Princess Alexandra, a young royal who had been briefed on Australia by Rolf Harris, was touring.

But for four women working in a grand department store – a fictionalised version of David Jones – the problems they face are very familiar. 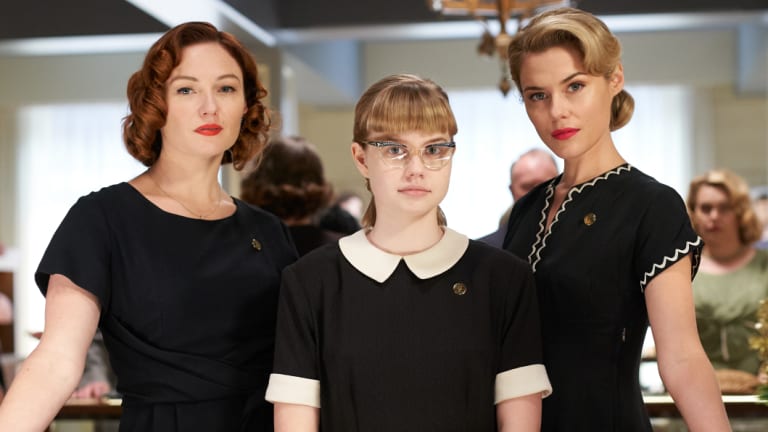 Alison McGirr as Patty Williams, Angourie Rice as Lisa Miles and Rachael Taylor as Fay Baines, in Ladies In Black.

Patty, who lives at Randwick with her uncommunicative husband, is quietly hoping to fall pregnant. Former cocktail waitress Fay, who lives by herself in a flatette near Bondi Junction, continues to be disappointed by the men she meets.

Lisa, a "frail as a fairy" 16-year-old who has just finished high school, has a father with fixed ideas about what his daughter should do next – and they don't include university. And Magda, an exotic Slovenian immigrant trying to make a new life, is called a "reffo" behind her back.

They all work in ladies fashion over summer at F.G. Goode's in Madeleine St John's 1993 novel The Women In Black – a witty coming-of-age story for both Lisa and the Harbour City.

For a slender volume that was originally only published in Britain where St John lived until her death from emphysema in 2006, The Women In Black has had a surprising new life in the past three years.

It's a gently comic drama that neatly captures a time in Sydney's history when working men expected dinner on the table when they came home via the pub – handing over housekeeping money to their wives – and students would head to The Sydney Morning Herald office late at night to see their exam results before they appeared in the next day's paper.

As St John writes, it's still a city where "early-rising housewives" head into Goode's from "the wooded slopes of the salubrious North Shore to the stuccoed charm of the Eastern Suburbs, from the passe gentility of the Western ditto to the terra incognita of the Southern" to do their Christmas shopping.

But times were about to change as the '50s give way to the '60s, with the influence of European immigration and the arrival of feminism reshaping society. 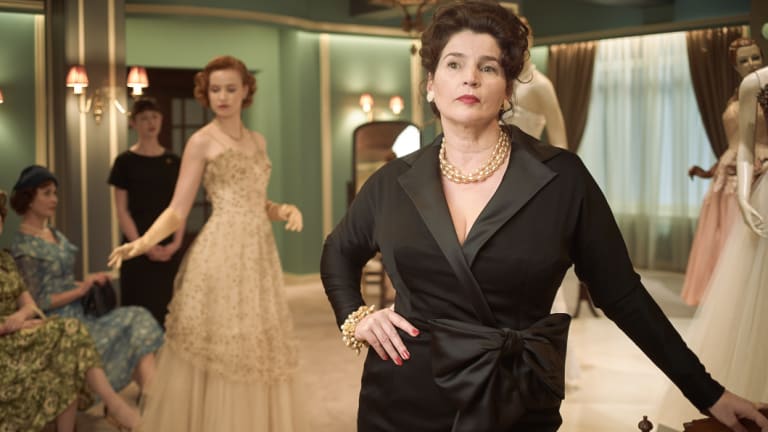 Julia Ormond as Magda in Ladies In Black.

Beresford has been attempting to make Ladies In Black since Clive James told him about the book over lunch in London shortly after it was published, calling it one of the best contemporary novels he had ever read.

"I rushed off and bought the novel and I thought, my god, it is wonderful," Beresford says. "I called Madeleine, who was living in London, in a council flat in Notting Hill [and] told her I wanted to make a film of it. I thought we'd set it up fairly quickly." Pause for comic effect. "Didn't think it would take 24 years."

Beresford, James and St John were all contemporaries at Sydney University at a time when Germaine Greer, Les Murray, Richard Walsh, John Bell and Robert Hughes were all students.

St John was a complex character – Beresford has described her as difficult and combative as well as very witty and good company – who blamed her cold Liberal politician father for the depression and suicide of her French-born mother when Madeleine was 13.

"She was a funny looking little thing but she was quite funny in university reviews," Beresford says.

It took until her 50s for St John to emerge as a writer – having earlier destroyed the manuscript for an attempted biography of Madame Blavatsky, the Russian founder of the Theosophical Society, after eight years' work. The Women In Black was her first novel; her third, The Essence Of The Thing, was shortlisted for the Booker Prize in 1997.

"It was a period of Australia I knew well – the late '50s and '60s when I was a student," he says. "And it dealt with this interesting theme of the migrants coming to Australia and the changes in Australian society. I thought it's a great story and it's done with such a lot of wit. It's not heavy-handed or pedantic. I thought that's the way to tell that story."

Beresford believes St John drew on her own work experience in the novel. "She always said to me that she never worked at David Jones in her holidays but I never believed that," he says. "People I know who had worked there said she must have been there because the detail is so accurate." 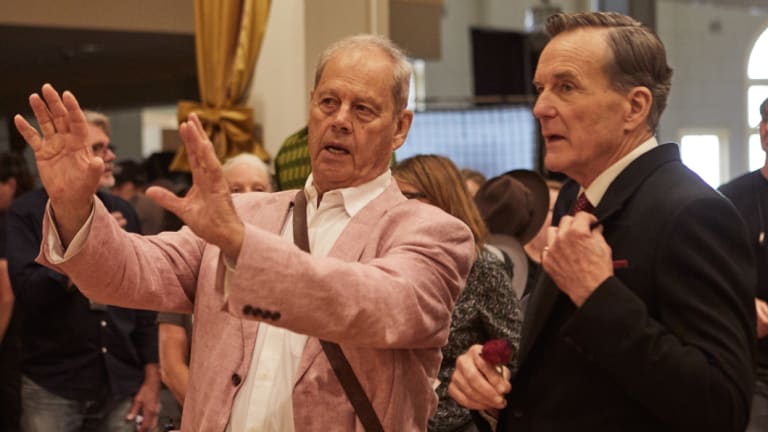 Director Bruce Beresford on the set of Ladies In Black with Nicholas Hammond who plays store manager Mr Ryder.

While films are rarely easy to finance, Beresford says the particular challenge with Ladies in Black was that potential backers considered the novel too insubstantial. "They said it's just very slight and there are little dramas," he says. "But I said 'the drama is how important it is to the people involved, not how earth-shattering it is.' It doesn't have to be about earthquakes or H-bombs.

"I mean in Driving Miss Daisy, where we had the same problems, the biggest dramatic moment is when Hoke, the black man, is accused by Miss Daisy of taking a can of salmon from the cupboard. That was the most dramatic incident in the whole film but it was important to her."

Milliken says the department store had a particular place in Sydney society at the time.

"It was where everybody shopped," she said. "Because it had everything and there weren't the shopping centres there are today, if you went into the city almost everybody shopped at a department store.

"It's a perfect setting for a story about women and bringing together the old Australia and the immigrants with the mistrust or misunderstanding between the two."

Milliken believes the push to make more films centring on women helped Ladies In Black finally get made – after producer Allanah Zitserman (Russian Doll, Horseplay) joined the project – and the way it deals with how immigrants change society makes it even more relevant now. While one distributor was interested in a film of the musical, she and Beresford preferred to stick to their original vision.

"We've stayed very faithful to the book because we didn't need to do anything different," Milliken says. "The book is a little jewel. It's an ensemble piece but the characters all neatly knit together and the story delivers you an outcome for everybody." 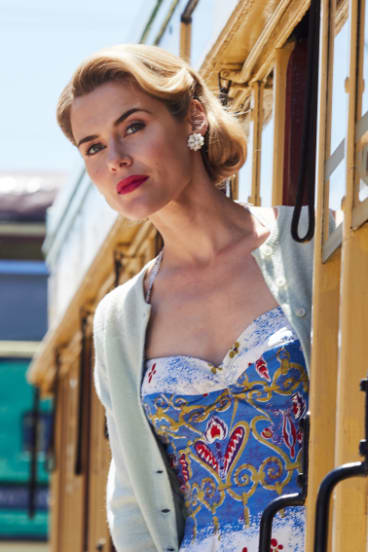 Rachael Taylor says the film is a ‘love letter to Sydney’.

To create Goode's, the filmmakers drew on what remains of the city's department store heritage that once included the likes of Anthony Hordern & Sons, Marcus Clark & Co, Mark Foy's, Grace Bros, Waltons and Gowings.

Just before the builders moved in, Beresford shot for a day on the unrenovated seventh floor of the real David Jones, turning it into the ground floor of Goode's. They created the buzzing fashion floor on a set at Fox Studios. And they shot exteriors at the old Mark Foy's building, which is now the Downing Centre court complex.

Magda's apartment was at author May Gibbs' house, Nutcote, at Neutral Bay; Lisa's house was at Strathfield; the Penrith Museum of Printing became the old-style compositors' room at The Sydney Morning Herald, where Lisa's father works; and tram scenes were shot at the Sydney Tramway Museum at Loftus.

In a break during filming at the Hydro Majestic Hotel in the Blue Mountains – the setting for an elegant New Year's Eve party that Fay attends before realising she would rather be somewhere else – Ormond says she immediately liked the role of Magda, who lived in a migrant camp before starting at Goode's.

"I really liked how it resonated with a lot of the things that are going on the world," she says. "And I loved the fact it was set back a few decades so we could see this other time that we'd all gone through with the movement of people and just how much of a positive impact that can have on our culture. It's all of us growing up and evolving together."

With her European style and love of literature and exotic food, Magda becomes an important influence on Lisa.

"She takes Lisa under her wing and brings her in to meet her family and friends and introduces her to a different culture," Ormond says. "She loves Australia and, as a refugee, she's aware on a daily basis of how lucky she is. She gives Lisa the confidence to do what she loves."

Taylor sees Ladies In Black as being about female desire.

"It's very much about a specific moment in time in Australian culture – 1959 on the cusp of the '60s, which was an era when there was great transformation for women," she says. "Yet you can also look at it and see how relatable the plight of each character is.

"For Lisa, it's about her stepping into her power as a young woman. For my character, it's about her commitment to true love. And other characters have different wants and desires that they're both realising and, in some more painful moments, not realising."

While Taylor sees the film as "a big juicy love letter to Sydney", she can also see why it struggled to get financed. 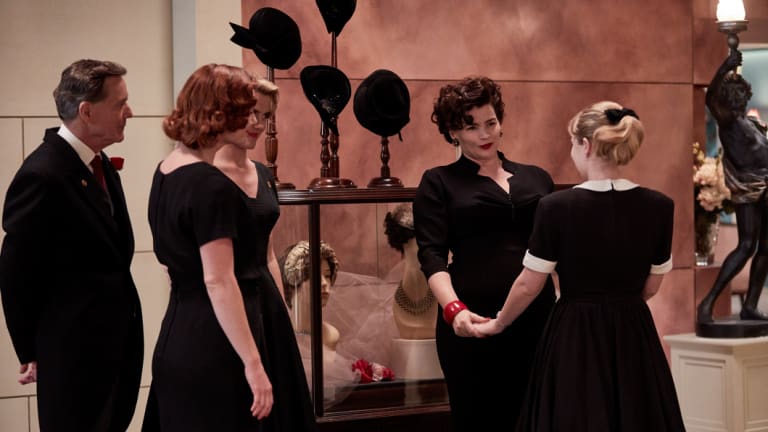 Julia Ormond and the cast of Ladies in Black.

"It's easy to look at fashion as frivolous," she says. "It's easy to put on a more intellectual hat and write off the importance of fashion as expression of femininity … One of the things that has been ushered in by some extraordinary television and movies that have female stories at the centre is that we're broadening our scope … We're realising it's not so black and white between what's an important story and what's an unimportant story."

While she spent decades bringing Ladies In Black to the screen, Milliken is far from being nostalgic about the '50s.

"People say to me the '50s were so wonderful," she says. "I say that if you think the '50s were wonderful, you weren't there. They were barren and stagnant. We had no arts to speak of in this country, no support for the arts.

"Certainly no films, very few books. The odd person who wrote a controversial book had it banned. There were a few wonderful artists working but beyond that there was no culture in Australia. The architecture was plain, the streets were devoid of trees in the city, the eastern suburbs was a hot, barren area. Australia was a pretty boring place. With the '60s came a new generation, who looked up and around and said 'we can do better than this' and 'we want the country to be better than this'."

Ladies In Black opens on September 20.