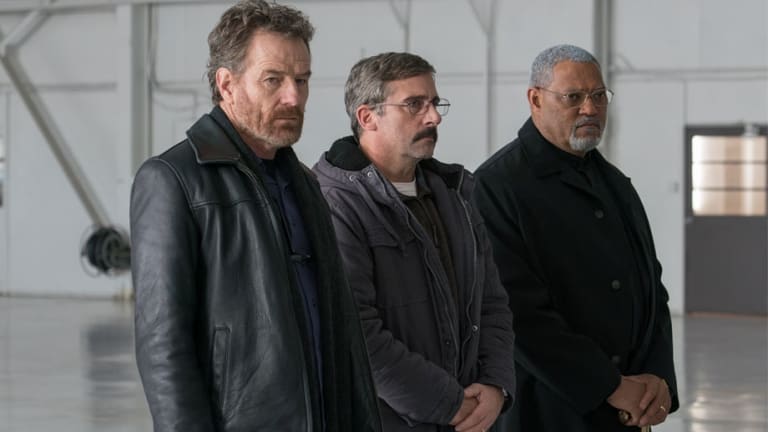 Of the important American directors now working, the prolific Richard Linklater must be among the least interested in straining for a masterpiece.

Sometimes the magic happens, as in his 2012 comedy Bernie, or the best parts of the trilogy that began with Before Sunrise. Sometimes he's just spinning his wheels, and in the laidback Linklater scheme of things, that's fine, too.

Linklater's latest, Last Flag Flying, has had an unusually complicated genesis. Its characters originated in Darryl Ponicsan's 1970 novel The Last Detail, which was the basis for Hal Ashby's 1974 movie of the same title, a sober yet rambunctious comedy about a couple of navy petty officers (Jack Nicholson and Otis Young) escorting a hapless younger sailor (Randy Quaid) to prison.

In 2005, Ponicsan published a sequel, which Linklater has now adapted into what is technically a standalone movie, giving the protagonists new names and reimagining them as Vietnam veterans linked by unspoken trauma.

But while Last Flag Flying may not be a direct descendent of Ashby's film, the two share significant DNA: both take place in drab, wintry east coast settings, relying on increasingly desperate antics to generate a compensating warmth.

The three buddies here are trouble-making Sal (Bryan Cranston​ in the Nicholson role), voice-of-reason Mueller (Laurence Fishburne​), and plainly shellshocked Doc (Steve Carell​), whose son has just been killed in Iraq (the year is 2003, shortly after the toppling of Saddam Hussein).

Out of contact since the war, they reunite to bring the body of Doc's son home to New Hampshire for burial, against the wishes of the current military brass.

At first glance, Last Flag Flying is a long way off Linklater's usual beat. If I had been forced to guess the director, I might initially have opted for Clint Eastwood, given the cheerless look, doggedly slow pace, and quizzical but not unsympathetic view of American patriotism.

But once the trip by bus and train gets under way, this becomes recognisable as yet another Linklater hangout movie, with minimal plot and maximum room for anti-establishment rhetoric and reflections on the passage of time.

What separates this from most of Linklater's work is the absence of a sense of possibility: age has wearied the characters, and their efforts to re-create the hijinks of The Last Detail are half-hearted at best. Part of this is by design, but part of it seems an inadvertent upshot of the casting of the three leads: fine actors individually, but not especially dynamic as a group.

In theory, the wild card ought to be Cranston, whose malcontent character can never resist stirring the pot. But his calculated flair suffers by comparison with the reckless spontaneity of Nicholson, whose rasping delivery he echoes: much of what he does physically – tapping his fingers on an escalator, energetically miming a visit to a brothel – resembles stage business carefully worked out in advance.

Fishburne, who has the least showy role, is the most convincing of the trio, especially in a potentially embarrassing scene where Mueller, who has found a vocation as a Baptist priest, shuts down Sal's jibes with a sincere account of his religious awakening.

Carell makes Doc into a variant on the kind of earnest simpleton he's played many times before, though his ability to convey stubborn innocence is more than a sitcom trick: in moustache and wire-framed glasses, he suggests a solemn 12-year-old who hopes that dressing as his father will impress the adults.

Last Flag Flying has too much on its mind to qualify as the straightforward old-fogey comedy it occasionally looks like (as in the gag of Sal's enthusiasm for mobile phones). But it is, in every sense, a dad movie, weighed down with remorse and nostalgia, and with the feeling that however long these guys blabber on, they'll never get to the bottom of what really haunts them.

A crucial late scene implies that sometimes the only viable choice is to keep a lid on the truth, a sentiment that accords with Linklater's career-long refusal of melodrama.

But as a statement about the consequences of America's wars – from Vietnam to Iraq and beyond – Last Flag Flying suffers a little from its maker's preference for keeping things low key. It's as if he were afraid to give us the full story, in this instance almost certainly a tragic one.

SpaceX Starlink satellites pass over UK this week: when to spot them

Marvel: Will James Gunn or Peyton Reed Be the First Director to Finish an MCU Trilogy?