Most reality TV stars don't have their faces beamed into living rooms because of their encyclopedic knowledge of luxury cars.

Nor, it's safe to say, are they usually 9 years old. But that's exactly the kind of talent Channel Seven has enlisted for season two of Little Big Shots.

The family-friendly show – hosted by Shane Jacobson – returned to TV screens this month and has managed to hold its own in a year that saw giants such as Australian Ninja Warrior bleed audience share.

Season two's debut was watched by around 1.3 million people across the country, thanks to young footjugglers, bubble artists and even a Bruce Lee impersonator.

Melbourne schoolboy Luca is one of the young stars making his small-screen debut this year. His mother, Anthea – who requested the family's surname not be published – admitted she did have some initial reservations about her car-obsessed son appearing on national television.

"I was nervous because I wasn't sure whether it was the right thing to get involved in," Anthea said. "But we gave Luca the choice of whether he wanted to do it or not and he was super excited, especially about meeting Shane Jacobson.

"The kids were all big fans of the show before this. It's not competitive. It's just showcasing kids for different talents." 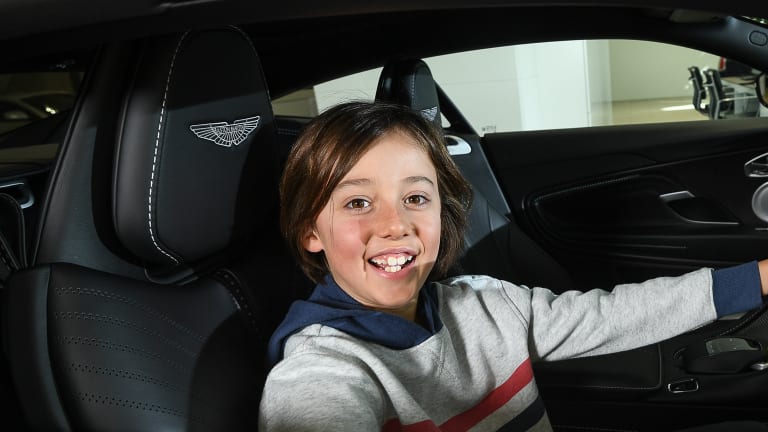 Luca from Little Big Shots sits behind the wheel of an Aston Martin DB11.

Luca says that the crew was great to work with, right from the moment a producer got in touch. His only complaints: getting the name of a car wrong during the initial Skype interview and the fact that the Little Big Shots team gave him too many freebies.

"I like that cars are everywhere," he said. "There's so many different types. I used to like every car, but now I just focus on luxury ones.

"It started maybe two-and-a-half years ago when I got a car magazine in the local supermarket. [Mum] bought it and I paid her back with my pocket money. I got addicted to that magazine and I read it around 10 times and memorised all the facts in that."

Luca can't pin down his favourite luxury vehicle, but nominates three potentials: the Aston Martin Vantage S, Pagani Huayra and the Porsche 911 Turbo S (because it's got "one of the biggest engines"). The latter will set you back a cool $494,000 on average.

Luca said he'd one day like to start his own car company, or maybe even an app that helps people select the vehicle that's best suited to their lifestyle.

"That way I don't have to buy all these cars," he said, gesturing to a showroom full of brand-new Aston Martins. "I can make my own. And you'd get a lot of money."

Hurricane Barry latest track: Which areas are under evacuation order?

Fears grow for teenage mum, 17, missing with 17-month-old daughter since yesterday in Blackpool