You think you’ve seen it all until you tune in to a bit of Friday afternoon telly and you’re suddenly greeted with the sight of Brian Conley breastfeeding Nadia Sawalha.

No, this isn’t us recalling a fever dream we once had, it’s the actual events of today’s (July 27) Loose Women. Naturally.

It all started when Nadia and Andrea McLean asked Brian and Ross Kemp how they would feel about manually breastfeeding their baby if their wife wasn’t able to. 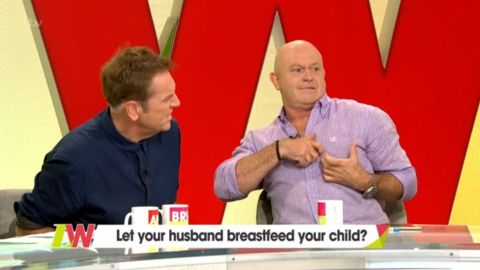 While Ross was his usual no-nonsense self and declined the offer, Brian Conley took the chance to try out Loose Women‘s very own version of the manual breastfeeding “machine”.

While Brian joked he found the experience “quite nice”, not everyone was impressed with the loose ladies’ (and men’s) antics, with some on Twitter calling the segment “wrong”.

One viewer argued that breastfeeding was a sensitive topic for some mothers, writing: “It’s a natural beautiful healthy thing that some mothers regretfully can’t do or struggle to! It’s not a joke.”

Another commented: “This is all kinds of wrong. It’s not funny at all.”

Others were a little more open to the idea, calling Brian and Nadia’s new-found intimacy “hilarious”. “Literally crying with laughter at this!” one fan added.

We don’t know how we feel about it all if we’re being honest, but we do know that we never want to think about it again. So, uh, where’s that eye bleach?

Thousands of Britons set to break out barbeques today