Tim Blake Nelson, Jake Johnson and Kesler Talbot round out the main cast 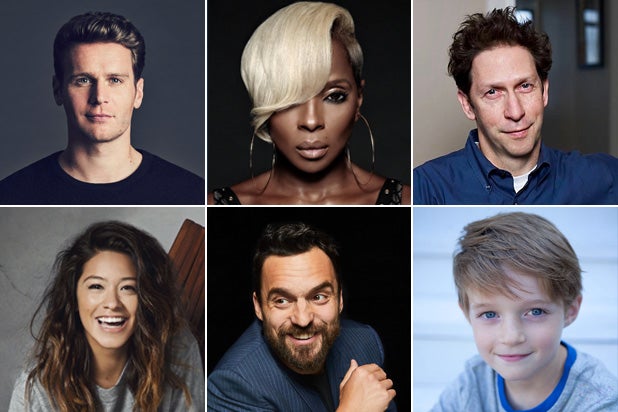 Inspired by the book “Ollie’s Odyssey” by William Joyce, the series “tells the story of a lost toy on an epic adventure, searching across the country for the boy who lost him, and the story of the boy who lost more than a best friend,” according to Netflix. Groff, Blige and Nelson will lend their voices to CG creations, while Rodriguez, Johnson and Talbot will play live-action characters. See full character descriptions below.

“Lost Ollie” is one of more than a dozen projects in the pipeline from “Stranger Things” producer Shawn Levy’s 21 Laps Entertainment under his recently re-upped overall deal with Netflix.

JONATHAN GROFF (Frozen, Hamilton) will voice Ollie, a handmade toy rabbit stitched together from odds and ends. Ollie has a pure spirit with a heart of gold and never ruins a chance to make friends. He’s been best friends with Billy since forever, until one day he ends up in a resale shop with no way home. Though he’s often afraid of the unknown, Ollie puts on a brave face and sets off to find Billy, meeting other toys to help him along the way.

MARY J. BLIGE (Mudbound, Power Book II: Ghost) will voice Rosy, a raggedy teddy bear stitched together from other toys. Rosy is a fearless warrior who is deeply passionate with inspiring confidence. While unsure of Ollie at first, she becomes an important ally as she joins them on their journey.

TIM BLAKE NELSON (Watchmen, O Brother, Where Art Thou?) will voice Zozo, a clown doll who is an old toy and an even older soul. Zozo is a true gentleman with a good sense of humor, and after meeting Ollie and hearing his story, he agrees to help Ollie on his journey.

GINA RODRIGUEZ (Jane the Virgin, Kajillionaire) will play Momma. Billy’s mother Sharon is a loving woman who inspires creativity and imagination in her son. She makes sure to cherish their time together, teaching Billy all the things he’ll need to know to find happiness in the future.

JAKE JOHNSON (Spider-Man: Into the Spider-Verse, Jurassic World) will play Daddy. Billy’s father James is overworked and stressed, doing his best to take care of Billy and his wife, Sharon. Sometimes that stress leads to being short with Billy, but he’s doing all he can to make a good life for his son.

KESLER TALBOT (50 States of Fright) will play Billy, a young boy with a mind bursting with creativity. He shares a magical bond with his toy Ollie, a homemade rabbit made by his beloved mother, who joins him on all of his adventures. When Ollie gets lost, Billy embarks on a mission to find him.

Thousands evacuated as Philippines are hit by Super Typhoon Mangkhut

Who is Riz Ahmed's wife?

'LPBW': Zach Roloff Said Matt and Amy Roloff Are 'Dealing With' Roloff Farms Together 'As Best They Can'