Transport Secretary Grant Shapps came onto BBC Breakfast this morning with Louise Minchin and Dan Walker, where he was interviewed about some of his government’s recent actions and upcoming plans. Louise took the conversation onto the recent announcement of a one percent increase in NHS workers’ salary and asked the minister: “Is that right, is that where it should be?”

“I would love to of course see our doctors and nurses receive as much as possible,” said Shapps.

“We are living through a period where 700,000 people have lost their jobs because of coronavirus, the entire public sector has got freezes on their pay, teachers, police, all the other public sector workers.

“But we are trying to ensure that there is a rise for doctors and nurse,” he added.

“Boy, do they deserve it! But we have got to balance all those lost jobs, the furlough programme and a lot of people in the public sector are not getting any pay rise this year.” 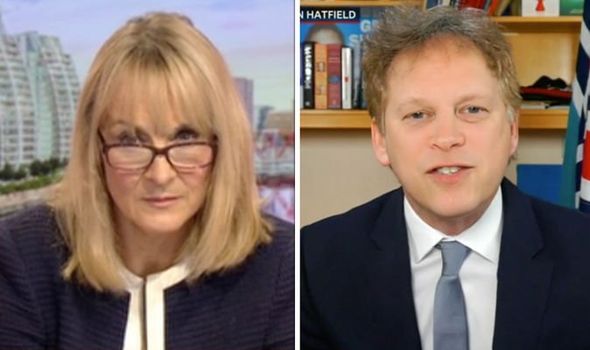 Louise hit back at Shapps answer asking him what he would say to an NHS worker when they hear that consultants on Test and Trace “are getting over £6,000 a day?”

“There has been a huge amount of money spent overall, £60 billion extra last year on the NHS so there has been money for all manners of different things including finding a pay rise.

“But it’s very important to recognise the extraordinary work,” repeated the politician before the Breakfast host pushed him back on track.

“If you could just address that question,” said Louise, then stating her previous question again, asking the minister for a comment for the NHS workers.

Laughing it off, Shapps said: “I haven’t seen the figures you are talking about consultants.

“What I do know is that a lot of extra money has gone into the NHS at a time when everyone else in the public sector is having a pay freeze and hundreds of thousands of people have lost their jobs and millions more are on furlough and they still have their jobs at risk.

“A pay rise is in part a reflection f the extraordinary work they have done,” said the Transport Minister.

“Of course lots of people have done extraordinary work during this pandemic, I am thinking of the key workers in all sorts of areas,” he added.

Rachel Lindsay: I Will ‘Never’ Be Friends With Raven Gates Again

Kimora Lee Simmons Got Into A Fight Over A Parking Spot

Baden Powell statue: Why is he being called a ‘racist’? – The Sun