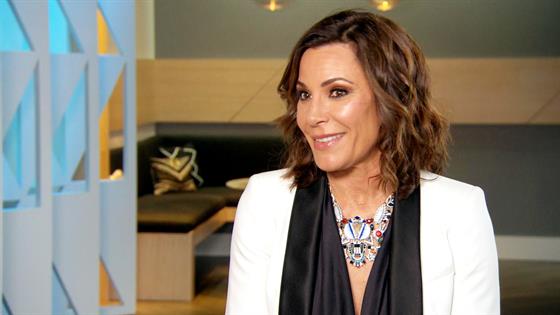 The Real Housewives of New York star sat down with E! News to talk a bit about the current fights and disagreements and “a lot of emotions and a lot of drama” on the latest cast trip, but really, we’re here for a different reason.

You see, Luann de Lesseps is a cabaret star with a new song coming out, and while some of her cast mates may say she’s on her high horse, she don’t care.

“When Ramona says that I’m on my high horse, like it’s gone to my head, my cabaret show, it really hasn’t,” she says. “I think it’s gone more to their heads than it really has to mine. I’m just doing what gives me great joy and happiness and to bring people joy and make them happy. If that’s being on a high horse, then yes, I’m riding that horse all the way.”

Jovani is of course a designer, and not just the thing Dorinda yells during Luann’s cabaret shows to heckle her. Luann is actually working with the designer on a line of bomber jackets to go with the song, but Jovani’s also not just a designer. It’s a feeling. It’s a lifestyle. It’s Jovani.

In the interview above, you can even hear Luann sing a little bit of the new song, which has lyrics such as: “Feelin’ Jovani and it feels so good.”

Luann is certainly living the Jovani life, selling out the Chicago Theatre and apparently getting a longer standing ovation than Liza Minnelli got when she played the Chicago Theatre. A high horse? Luann’s riding the freaking Trojan Horse.

Up next for the star is a music video featuring special guests Lisa Rinna and Cynthia Bailey, which is obviously going to be fabulous, but first there are confrontations to be had on The Real Housewives of New York, which airs Wednesdays at 8 p.m. on Bravo.

(E! and Bravo are both part of the NBC Universal family.)

EE, Three and Vodafone will soon be rivalled by a network with one big advantage

Warning as child, 3, drowns in swimming pool after gate was left open