Meghan Markle and Prince Harry reunited on Thursday for their first joint event in what some commentators have branded their farewell tour before officially giving up their Royal Family roles at the end of March. The Duke and Duchess of Sussex attended the Endeavour Awards ceremony at Mansion House, London, where they were welcomed by the cheering crowd despite the heavy rain hitting the capital. Royal commentator Camilla Tominey suggested the event highlighted a key aspect of royal life Meghan and Harry will come to miss once they are officially outside of royal control.

Speaking to This Morning, Ms Tominey said: “I think they’re more relaxed because they are going off although I would say – you know that fantastic royal photo which is by a royal photographer called Sami Hussain, whose father Anwar used to photograph Princess Diana?

“That staging, they are going to miss. Yesterday night’s appearance was a classic example of a final royal rota set-up where everything is staged and choreographed.

“The snappers can get the perfect shot. What will happen when they are in America? How will it be staged and who will manage it? Where will everyone be and where will the public be?”

Ms Tominey added: “Until they leave the firm, they’ve got a cloak of security around them because they are being managed. When they will be celebrities, it will all be different.” 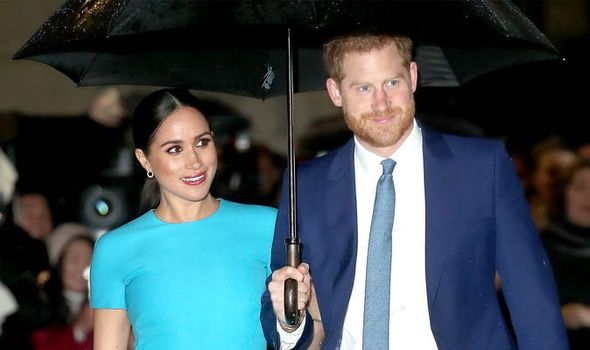 The Duke and Duchess of Sussex were greeted mostly by cheers, but there was one loud boo, as Meghan and Harry embarked on their first joint engagement as they wind down their royal duties in the coming days.

Despite a busy schedule of final engagements and miserable weather, Meghan and Harry were in good spirits, beaming for royal fans and they were even pictured gazing into each other’s eyes.

The Duke and Duchess both signed the visitors’ book upon arrival and spoke with Endeavour Fund Award nominees before posing for a group picture.

Meghan was heard saying “go back to feeling your sense strength” while chatting with nominees among the buzz of the busy room. 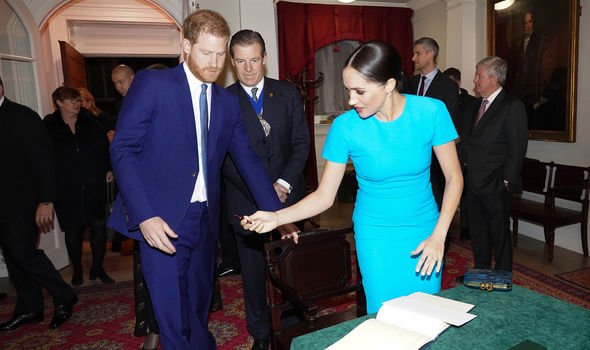 The Duchess revealed it was “very nice to be back” as she described the Endeavour Fund Awards as “the most inspiring space”.

Speaking to guests at the event, Meghan Markle shared her admiration about the simplicity of its premise, which sees injured and ill military veterans recover through sport and adventure challenges.

She said: “It allows you to regain your sense of strength. It’s huge.”

The mother-of-one also mentioned her son, Archie Harrison Mountbatten-Windsor, who has not accompanied his parents to the UK.

She said: “Oh yes, well he is ten months now and is into everything.”

The Duke and Duchess of Sussex will be attending two more events together before they step down from their roles at the end of the month.

The couple will be attending the Mountbatten Music Festival at the Royal Albert Hall on Saturday before joining the rest of the Royal Family at the Commonwealth Day Service on Monday.

During the service, royal family members will meet with key figures involved in the service before listening to readings and musical performances.

The Commonwealth Day service is one of the most important dates in the royal calendar, and Prince Andrew had been a regular attendee through the years.

Parents 'forced boy to drink hot sauce until he vomited, kneel on thumbtacks and locked him in closet'