Sorry to those of you who were hoping to see Our Girl star Michelle Keegan take to the dancefloor, but the actress has dismissed any rumours that she’ll be joining the line-up of Strictly Come Dancing any time soon.

Michelle’s name often pops up on Strictly rumour lists – and it’s not the first time that she’s shut down the idea either – but the actress is now making it clear that appearing on the competition show is just something she does not want to do.

Or, at least, not right now.

“I’ve seen the story, saying that Mark’s not letting me do it,” she told Digital Spy and other press. “To be fair, again, you can’t say ‘never’ to these things, because if it ever comes around, people will be like, ‘Oh? You said you’d never do it.’

“But it’s something that I wouldn’t want to do now.”

Michelle’s husband Mark took part in the 2014 series of Strictly Come Dancing, ultimately finishing in fourth place – behind Simon Webbe, Frankie Bridge and eventual winner Caroline Flack – and she continued to say that watching Mark take part was nerve-wracking enough for her.

“I would be terrified, because I remember watching Mark in Strictly, and my heart was in my mouth for him – do you know what I mean? – watching him do it,” she added.

“So yeah, it’s not something that I’ll be doing any time soon, I don’t think.” 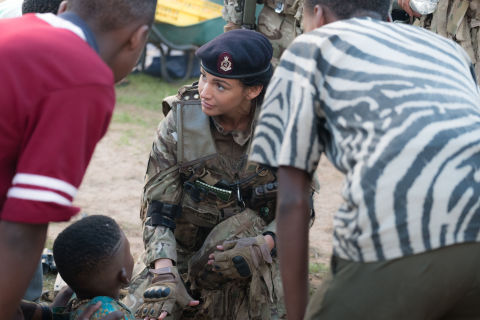 Still, there’s plenty else to occupy Michelle’s time if she won’t be embracing the sequins this year (or next year, or the year after that) as she’ll be back as Lance Corporal Georgie Lane in the next block of episodes of the show’s third season.

The actress also told us that she knows audiences will find it “tough” to move on with the series following Luke Pasqualino’s shock exit as Elvis, and explained that even she didn’t really have time to reflect on Luke’s leaving as she went straight into filming the next episode.

“We literally finished on one episode, and were straight on to the next,” she told us. “I remember, the scene where Luke went, he did his last scene and we were already onto the next episode the next morning.

“So we had no time to digest it all and what just happened. You just move on.”

Our Girl returns to BBC One on Tuesday, June 5 at 9pm.

These Colored Engagement Rings Will Make You Forget All About Diamonds

Woman, 30, charged after baby hit head and died when she gave birth unexpectedly