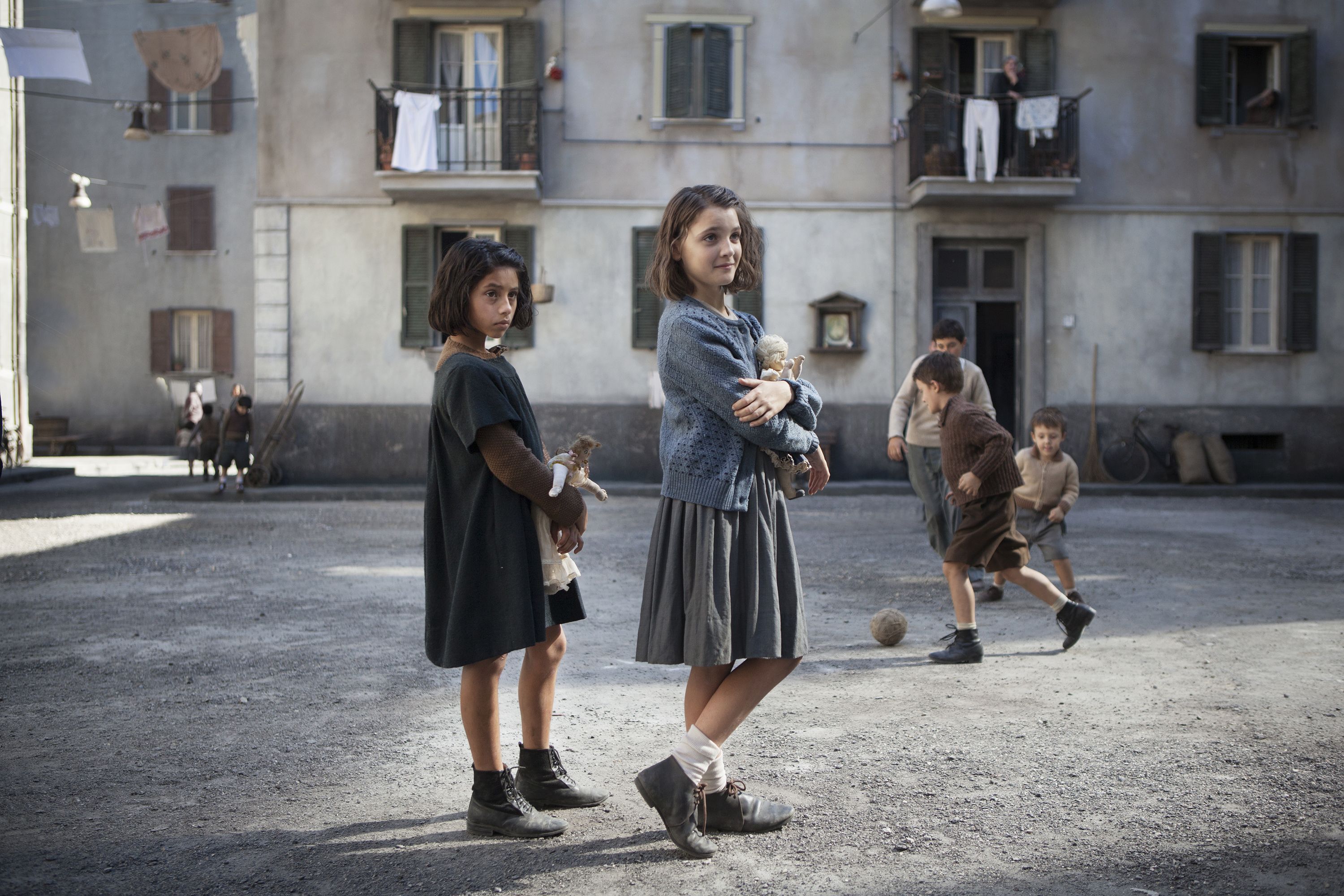 In the impoverished, dour neighborhood in post-war Naples that provides the setting for Elena Ferrante’s four Neapolitan Novels, violence is as much a staple of survival as food and water. “Life was like that, that’s all, we grew up with the duty to make it difficult for others before they made it difficult for us,” Elena (AKA Lenù), the books’ narrator and subject, states in the opening pages of the quartet’s first volume. The first episode of HBO’s eight-part adaptation of this book, My Brilliant Friend, is faithful to this framing device, placing Lenù and her closest friend Lila in a community ravaged by grotesque, often unexpected displays of savagery.

I counted three separate instances of blood-drawing violence in the episode’s 56 minutes, not including verbal threats, screaming matches, physical intimidation, or punches, slaps, and other instances of bodily harm that don’t necessarily cause physical damage. (The emotional violence is saved primarily for Episode 2). Executive producer Jennifer Schuur tells BAZAAR.com the show strove to mimic the books’ bluntly realistic depictions of violence. “It is such a fundamental part of what these girls are fighting against and fighting to get away from—or being subsumed by—in their lives,” she says. “We needed to treat that truthfully, and show it in a way that sometimes is very hard to watch.”

The show lays out two particular moments which define the environment Lenù and Lila grew up in and illustrates exactly how it influenced them in different ways. The first, most obvious threat is patriarchal, for show; it stems from Don Achille, a mob boss who controls the neighborhood’s economy and, thus, the survival of every person dependent on it. When Alfredo, a carpenter, accuses Achille of sabotaging his work, Achille and his cronies pluck the man from his pew during a funeral mass. Most of the beating takes place off-camera from the perspective of Lenù, who absorbs Alfredo’s cries for mercy and his wife’s screams echoing through the church. This is a warning, of course, but also not necessarily shocking to other churchgeors; in fact, it’s a terrible sort of entertainment for the townspeople, who scramble out of their seats to witness the beating and, once they get their fill of the damage, rush off in fear of their own safety. When Lenù finally gets outside, she can barely see the action through the scrum of people—just a final blow from the unseen perpetrator as Alfredo’s body hits a wall.

“Don Achille is supposed to be this almost mythical presence in the neighborhood, especially to these two little girls,” Schuur explains. “If you saw him do that, it would take away a little bit of the magic and the fear and terror, the bigness of that character. It was meant to seem almost as if it happened by magic.” 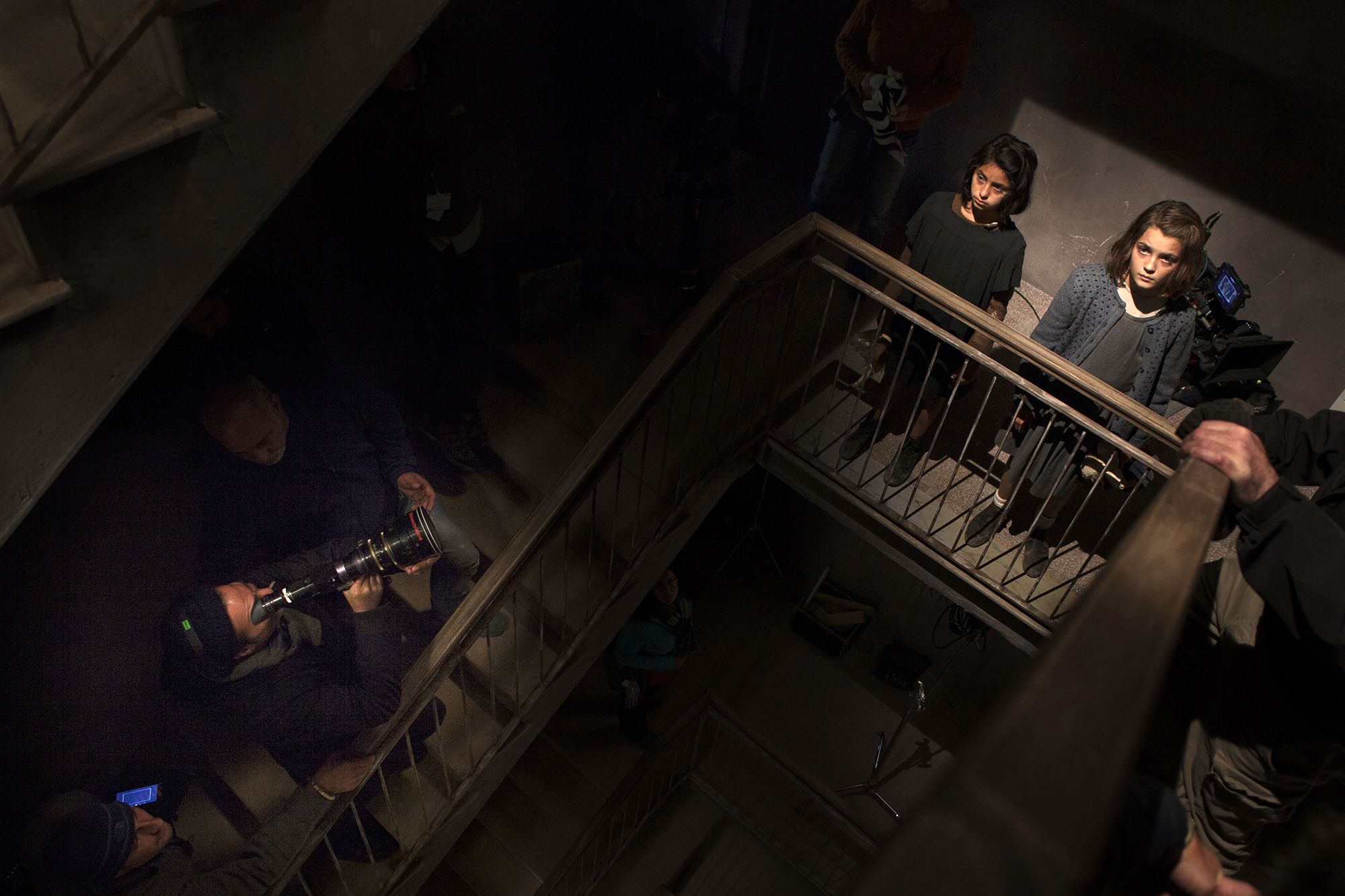 Contrast this with the raw anguish and rage ricocheting off two warring women who live in Lenù’s apartment building. Melina, a recent widow, has fallen in love with Lidia’s husband, a gentle, devoted man who provides support for Melina after the death of her husband. Melina goads Lidia, ruining her clean laundry and shouting insults, until the two come to blows in the building’s stairwell. Over the cries of wailing children, the two women pull each other’s hair and grab at the other’s limbs until Melina flies down a flight of steps.

“That is one of those beautiful places that we were given an opportunity to talk about women specifically in this world,” says Schurr. “[This scene] sort of entered their heightened emotional life in this place.” The fight ends with Lenù fainting at the shock of the situation and cuts to a physical imagining of a phenomenon Ferrante describes vividly in the book. Over images of bugs crawling out of the sewers and up into the beds—and bodies—of women like her mother, Lenù’s voice calmly states:

The episode cuts an important piece of narration from this statement: “Women, who appeared to be silent, acquiesent, flew into a rage that had no limit and no end.” This is one of the very themes that Ferrante excels at capturing. She asserts and validates the intimate heartbreak of long-suffering women (and the girls who grow up to be these women) while contrasting their situations with simultaneous public displays of masculinity. “There’s something very interesting and rare about seeing the bad behavior of women on television,” Schuur says. “It’s a very real part of actual existence. Women don’t always behave like the Madonna. We have every range of emotion… [this scene] felt like a place where Ferrante’s work elevates women’s literature and women’s centering within a really large, epic story. This was a place to do that in just one scene.”

Additionally, these two segments of violence together underscore the differences in Lenù and Lila’s very natures. Lila is tough, unflinching and defiant in the face of everyday violence, while Lenú most often looks on in horror, even disgust. Schuur points out this ever-present danger dictates the course of these two women’s lives: “It helps you get a deeper understanding of why, over the course of 60 years, one girl ends up staying in the neighborhood. The other one ends up getting out.”

My Brilliant Friend airs Sunday and Monday nights at 9 p.m. EST on HBO.