There is lots of fun to be had with Netflix’s hilariously retro teaser for Stranger Things 3, if you don’t let one tidbit get you down.

The streaming giant once again played up the ’80s vibe of the Duffer brothers’ science-fiction series by teasing the new episodes in the form of an advert for Hawkins, Indiana’s new Starcourt mall.

And by ‘new’, we mean that that that mall will be opening (in the world of the show) in 1985. Specifically, the teaser specifies “next summer”, which leads us to believe that the third season won’t be arriving for a full year from now.

There had previously been reports that the third run of Stranger Things would be put off until 2019, with series producer Shawn Levy also suggesting it would likely also have a smaller episode count than in past years.

With the bad news out of the way, there is some really cool stuff in the teaser too. There are plenty of nods to US mall culture of ’80s, including cameos from shops that kids born during the era will fondly remember. 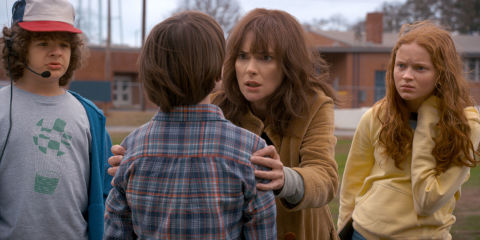 Some fans are even noticing that the Starcourt mall looks suspiciously similar to the mall that the ladies of GLOW used to shoot their promo videos in their own Netflix series — a crossover seems unlikely but you never know!

Last week, executive producer and director Shawn Levy dropped a few hints about the new episodes by promising that Stranger Things will be “going to yet darker still places that [he thinks] audiences are going to really love”.

While we wait until next summer (PFFT!) for season three, Stranger Things will at least release a new book exploring Eleven’s backstory and a comic telling what happened to Will inside the Upside Down.

Stranger Things is available to stream on Netflix.

Can We Please Stop Talking About Taylor Swift's Bangs?

What Does 'Goop' Stand For?

From Saturday Night Live to Big Daddy: 16 Must-See Throwback Photos of Adam Sandler in Honor of His Birthday