Horror fans don’t have to wait until October to celebrate the scary movies, but this month offers a welcome opportunity to embrace the form. Last year, when the pandemic made in-person film festivals hard to achieve, four respected genre festivals from around the country — Boston Underground, Brooklyn Horror, North Bend, and Overlook — joined forces for a virtual festival event called Nightstream. Blending traditional horror programming with broader examples of genre filmmaking, the lineup provided a welcome opportunity to bring the festival experience to audiences nationwide.

This year is no exception: The second edition of Nightstream begins tonight and runs through October 13, with an exciting online program of films and events accessible to anyone in the U.S. Badgeholders will be able to tune into conversations with David Lowery, “Malignant” writer Akela Cooper, and “Creepshow” showrunner Greg Nicotero, as well as recurring events like The Future of Film Is Female and the Miskatonic Institute of Horror Studies.

So what about the movies? Nightstream features 31 titles from around the world, including some highlights from the genre festival circuit and a few hidden gems. Here are a few of the highlights. To purchase a festival pass or individual tickets, go here.

Set on a fantastical planet where only women can survive the unusual climates, this enigmatic epic from Bertrand Mandico is like lesbian erotica crossed with a very bad acid trip. One part “Annihilation,” one part “The Love Witch,” under the veneer of a sadistic “The Neverending Story,” the film creates a lush — sometimes grotesque — alternate universe ruled by unique rules, creatures, and longings.

The story is narrated by the mulleted platinum blonde at its center, who is cast out of her community after unearthing a mysterious glittery woman named Kate Bush, who sports one hairy arm and is rumored to be death herself. In order to be accepted back into their community, Roxy (Paula Luna) and her mother Zora (Elina Lowensohn) chart a course through this untamed otherworldly wilderness to find and kill “Kate Bush.” What they find on their journey will transform them, and you, forever. —JD If you knew nothing about the premise of “Alien on Stage,” it would be easy to think you were watching the latest Christopher Guest comedy. This documentary that plays like a mockumentary tells the improbable tale of a shaggy crew of UK bus drivers who take an amateur stage production of Ridley Scott’s “Alien” to London’s West End — and it’s every bit as hilarious as that sounds.

Revealing amazing feats of technical ingenuity, actors who’d rather be at the pub than learn their lines, and a former military director who hates the spotlight, “Alien on Stage” captures lighting in a bottle. Think “Waiting for Guffman” with a fairytale ending — and one of the funniest documentaries in years. The filmmakers made the brilliant call to put a camera inside the Xenomorph costume, using the grainy POV footage at climactic moments. The crowd’s energy is so infectious, you feel like you’re in the theater. By the triumphant curtain call, as young performer trots onstage for a very professional bow in full Xenomorph garb, it’s clear “Alien on Stage” has completely captured the hearts of the audience — “Alien” and Christopher Guest lovers alike. —JD

“Beyond the Infinite Two Minutes”

Just when you thought there were enough time-loop movies out there, along comes Japanese director Junta Yamaguchi’s fast-paced story of cafe owner Kato (Kazunori Tosa) suddenly contacted through his computer screen by a version of himself two minutes in the future. The head-spinning twist suggests cerebral-meets-silly storytelling of Nacho Vigalondo’s best work (think “Time Crimes” meets “Open Windows”), as Kato shares the phenomenon with other acquaintances as they attempt to exploit the sci-fi circumstances that suddenly energize their otherwise drab routine. Clocking in at 70 minutes and shot in a single take with an iPhone, “Beyond the Infinite Two Minutes” showcases the playful ingenuity of Japanese theater troupe Europe Kikaku, and bodes well for their future film experiments. —EK

“We’re All Going to the World’s Fair” 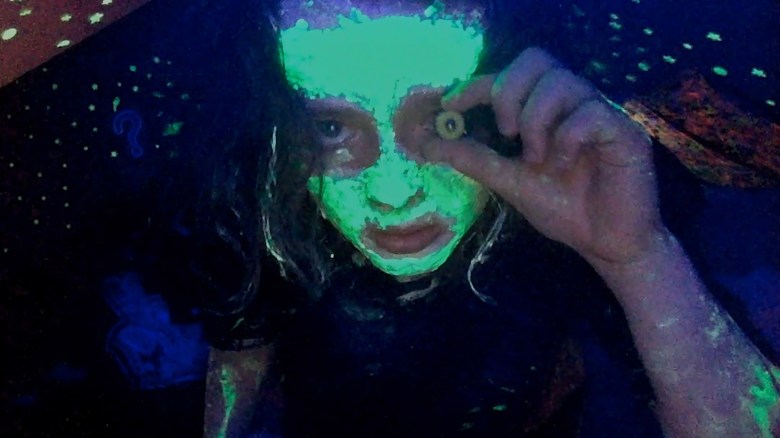 “We’re All Going to the World’s Fair”

Jane Schoenbrun understands the internet. The filmmaker behind such projects as “A Self-Induced Hallucination” (a 2018 doc “about the internet”), the tech-tinged “Eyeslicer” series, and the dreamy “collective: unconscious” has always found the space to explore the web with respect, reverence, and a healthy dose of fear. For their narrative feature debut, Schoenbrun expands their obsessions to craft an intimate and sometimes eerie tale about the impact of modern internet culture. Part coming-of-age story, part horror film, and the greatest argument yet that something as bonkers as “Creepypasta” can inspire something so beautiful, “We’re All Going to the World’s Fair” is a strong debut for a filmmaker who is nothing if not consistent in their themes.

Schoenbrun and their wonderful star, Anna Cobb (“in her feature film debut,” as Schoenbrun’s credits charmingly remind) bring profound empathy to both the film and Cobb’s Casey, who wastes her days indulging in eerie internet challenges while watching videos of strangers who do the same. Moored between basic teenage ennui and a simmering eagerness for something, Casey’s story is almost certainly a familiar one to many extremely online teens. —KE

“Woodlands Dark and Days Bewitched: A History of Folk Horror”

Everything you always wanted to know about pagan blood sacrifices and the lingering psychic traumas of colonialism (but were afraid to discover for yourself), Kier-La Janisse’s “Woodlands Dark and Days Bewitched” crams an entire semester’s worth of Hauntology 101 into a numbingly comprehensive 193-minute documentary that unearths the history of cinematic folk horror in such loving, erudite, and seductive detail that you almost can’t wait for it to be over so you can start watching some of the 100+ films that are excerpted along the way.

Not that such patience will necessarily be required. Trusting that her subject matter is fertile enough to merit such a scholarly approach, and also bewitching enough to survive it, Janisse connects the dots between “The Wicker Man” and “La Llorona” in a way that allows this multi-chapter epic to function as both séance-like spectacle and streaming-era syllabus in equal measure. Screening in the Nightstream lineup alongside a folk horror sidebar curated by Kier-La Janisse. —DE