“We want to see something that does feel like a potential future,” Steven Soderbergh says Saturday 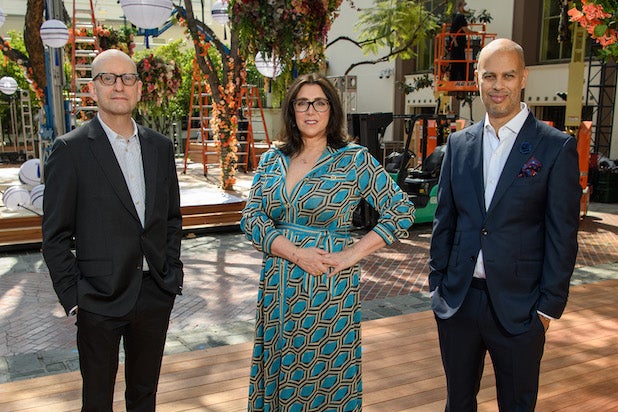 Steven Soderbergh was intentionally vague about whether nominees, presenters and guests will be wearing masks at this year’s Oscars, and that’s just one ingredient of the secret sauce that the producers are hoping will make this year’s awards show unique and unlike any awards show we’ve seen, one during a pandemic or otherwise.

Soderbergh along with producers Stacey Sher and Jesse Collins for the 93rd Academy Awards discussed in a press conference Saturday how this year’s Oscars will “announce itself as being different” right from the start. And without giving away too many details, they clarified that the show will make do with “satellite hookups” in place of Zoom calls, and that by the end of the show, people “will be talking about how they made this happen.”

Soderbergh said the hope for the show is to “get us out of this feeling that we’re trapped at home. We want to see something that does feel like a potential future.”

But as to the question of masks specifically, well you’ll just have to wait and see.

“Masks are going to play a very important role in the story of this evening,” Soderbergh said. “If that sounds cryptic, it’s supposed to be.”

There’s been some hand-wringing these last few weeks when it became clear that the Oscars would ask nominees and guests to attend the ceremony in person and that awards would not be handed out over Zoom. It led to the introduction of European hubs where international nominees could accept their prizes, and Soderbergh said simply that satellite hookups were a way for the producers to better control the image, and Zoom “doesn’t really fit” the image for what the producers are trying to achieve.

That said, this introduced new technological hurdles that they’ve had to solve these last few weeks, but Soderbergh said that saying there would be no Zoom was “never about exclusion” or denying access to people who declined to attend the show. Rather, it was “about making it feel like it was part of a piece.”

Collins and Sher talked about Soderbergh’s “manifesto” from the beginning of this process, and that’s culminated in the Academy touting this year’s broadcast as less of an awards show and more like a movie. They reiterated some details as to how they’ll make that a reality, including shooting in 24 fps, but also focusing on the shot composition, different over the shoulder shots and camera framings that aren’t strictly placing the person in the middle of the screen. He even touted that the work this year’s musical director, Questlove, will go a long way to making the show sound different and feel more cinematic.

Sitting from the show’s space as the set is still being built, the producers touted just how beautiful a location it was and how there were no bad angles in the space. And he hopes that atmosphere will invite winners from the evening to open up and “tell a story.”

“Emotion is up in your grill,” Soderbergh said. “It will be really intense.”

This year’s show will bump the Oscar nominated song performances to the pre-show, which the producers said all the nominees were eager to participate in because it meant the songs could be performed in full rather than as part of a medley. Though every award will still be handed out on air, and the hope is that by the end, they’ll have provided a “template” for how other awards shows and film productions can hope to return to work.

“People will see this show and feel like this is possible.”

The producers were also asked about the decision way back last year to delay the Oscars by two months, and they agreed that what they’re doing today would have been “impossible” had they not made the shift. But because COVID is still a reality, they’re still cognizant of capacity issues and keeping the show safe, even if that means heavy hitters who usually are staples of the show won’t be invited.

“Bog Iger won’t be there,” Soderbergh said, explaining the decision to limit the Oscars to just nominees, plus ones and the show’s presenters, and how even getting those people to the show has been an ever-evolving process. “It’s like building a plane while it’s in the air.”

Throughout Saturday’s press conference, Soderbergh, Sher and Collins reiterated that next Sunday’s show will be an “optimistic” occasion and a celebration of movies, but it’s clear they’re taking chances we’ve never seen from an Academy Awards before.

“It opened up an opportunity to try some things that haven’t been tried before,” Soderbergh said. “We want the show to have a voice.”

The Oscars air on ABC on April 25.

Toddler, 2, dies in hospital as two people arrested over death