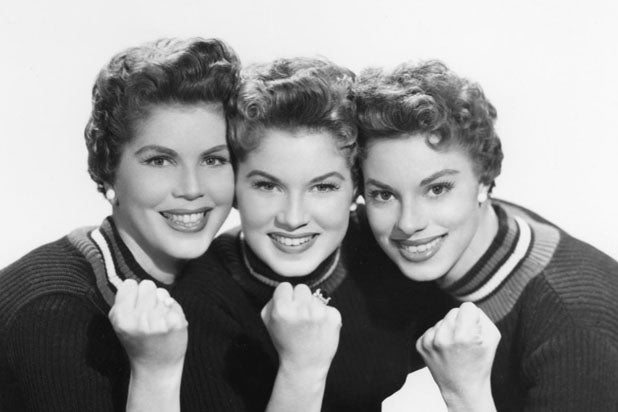 Phyllis McGuire, who was the last surviving member of the 1950s singing trio The McGuire Sisters, has died. She was 89.

McGuire died Tuesday in her estate home in Las Vegas, according to a report in the Las Vegas Sun. No cause of death was given.

Phyllis McGuire (center in the above photo) along with her sisters Ruby Christine and Dorothy, or “Dottie,” had two No. 1 singles in the 1950s, the songs “Sincerely” and “Sugartime.” The trio of sisters originally from Middletown, Ohio signed a record deal in 1952 and continued up until 1968, when they retired from public appearances with a final performance on “The Ed Sullivan Show.”

The McGuire sisters got their big break in 1952 after appearing as part of a talent show and then getting the chance to perform on a radio broadcast. They were frequent guests with Ed Sullivan, and they had the distinction of performing for five U.S. presidents throughout their career and for Queen Elizabeth II.

The group was known for their perfectly coiffed hairstyles and their in-unison hand movements and dance, and songs like “Sincerely,” “Sugartime” and “Picnic” all sold over a million copies. Some of the trio’s other hits included “Goodnite, Sweetheart, Goodnite” and “Something’s Gotta Give.”

In 1994, The McGuire Sisters were inducted into the National Broadcasting Hall of Fame.

Phyllis McGuire in particular became well known for her often-showcased estate mansion in Las Vegas, which inside had a 45-foot-tall replica of the Eiffel Tower that serves as the estate’s structural reinforcement and rises through the roof of the mansion. It even has its own beauty parlor and a swan moat.

Darius Rucker on Post Malone’s Cover of Hootie & the Blowfish’s ‘Only Wanna Be With You’: ‘He Always Has a Fresh Way to Say Things’