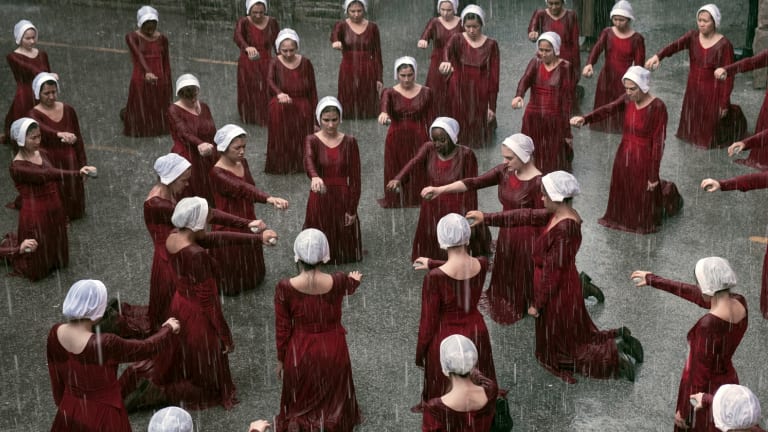 The second season of The Handmaid’s Tale is under way.

You can't shatter someone the same way twice. That applies to both the audience watching The Handmaid's Tale and its protagonist, Elisabeth Moss' June Osborne, who, in the dystopic drama's second season, remains in the possession of a totalitarian state that has taken away her every right. Last year's initial episodes were so shockingly powerful that to merely recreate them now would be an act of regression.

Now that the second season is under way – this is the fifth of 13 episodes – you can appreciate how the show's creative team, led by Bruce Miller, has had to maintain the complete ferocity of life in the Republic of Gilead, the nightmarish successor to the United States, but provide new dimensions. Gilead, which has taken away June's freedom, body, and name, is uncompromisingly brutal, but the narrative needs more.

The first season used almost the complete breadth of Margaret Atwood's 1985 novel, ending as June's memoir did with her being removed from the home of Commander Fred Waterford (Joseph Fiennes) and his wife, Serena Joy (Yvonne Strahovski), the powerful couple who had been assigned June – renamed Offred to indicate the Commander's ownership – as a surrogate mother. This season has featured an escaped and pregnant June initially hidden away by the underground resistance.

The Waterford house, with its cruel punishments and hidden hypocrisies, was such a claustrophobic setting that escaping it, even for a furtive freedom, was like a great rush of oxygen. The violent punishments unleashed in the first two new episodes were bleakly confronting, but that is the show's reality. What was different was seeing June rediscovering herself and being visited by her lover, the Waterford's driver Nick (Max Minghella).

She was sequestered in the abandoned, bullet-ridden offices of The Boston Globe newspaper. It was a nod to how democracy is suppressed, and how that risk lurks in any society. Scouring clippings for signs of the conspiracy that launched Gilead, June realises that "you were here all the time". One invasive flashback was set before the Gilead coup, like an unheeded warning.

The direction is masterful in framing the bodies of the red-clad Handmaids, shooting groups of them from above to emphasise how they are corralled and arranged, or framing June's body as a defiant retort to the forces arranged before her. When she was returned to the Waterford residence, June's life saved by her pregnancy, it was shot like the introduction of a horror film, complete with foreboding creaks. It was a truly haunted house.

Sites only referred to in Atwood's book, such as the toxic slave labour camps known as the Colonies, are now being seen, while the third episode made great use of a previously unused strand in the text, flashbacks to June's relationship with her mother, Holly (Cherry Jones), which shaped her relationship with feminism. There are also scenes of exile life in Canada for June's husband Luke (O.T. Fagbenle) and friend Moira (Samira Wiley).

Moss is superb in taking June back to the edge of surrendering to Offred's fate, with close-ups that capture a roiling contemplation, and there's more to be found in Strahovski's portrayal of Serena Joy, a conservative revolutionary forced into a puritan past. The Handmaid's Tale remains compelling, but the scope is broader and the reckoning sizeable. It can't be as shocking as it was, but the new season remains terrifyingly absorbing. CM

The most incredible marriage proposal EVER!