Your pilot, The Angus Project, follows you and your friend Angus Thompson, whose life it's somewhat based on. How did you come across Angus' story?

Angus and I were just mates during uni, and he asked me to become his carer, and I did. We watched a lot of TV together, and we were pissed off at the lack of representation – Angus never saw anything on TV that reflected his own life. Then we were like, hang on, I'm a writer, and we have this story, why wouldn't we make it? 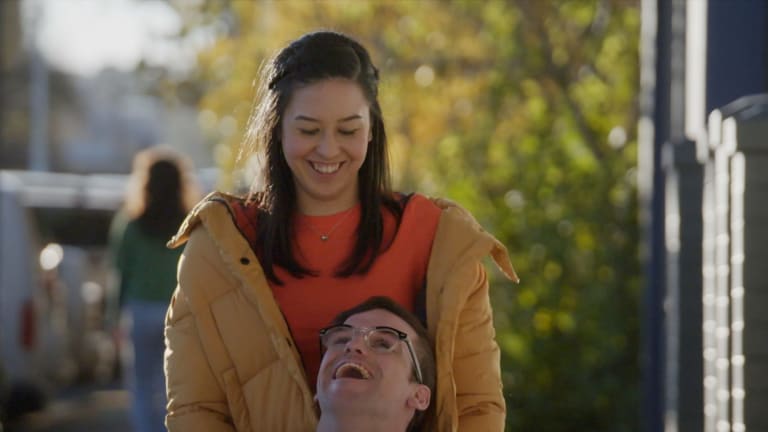 The Angus Project pilot hopes to start a conversation about disability representation on the Australian screen.Credit:ABC

When did you make the pilot?

The pilot's part of the Fresh Blood Initiative. Originally we made a webseries, also as part of Fresh Blood, and we were lucky enough to be one of the ones chosen to become a pilot. Our original series was going to be quite sad and dramatic, so we shot – using university equipment – about three episodes of this sad series, and then to apply for Fresh Blood we bastardised the rushes and turned it into this comedy trailer.

How important is it to have done a show with a disabled man at the centre?

It's really important – I've never believed in anything so much in my life. We want to use it to start a conversation about disability representation on the Australian screen, because there's very little. I think the ABC does a great job, but there's definitely disability representation lacking in narrative shows in Australia. With this show we're hoping to open up the conversation and change the game a little bit.

It was quite a coup to get Sammy J. How did you?

Can I say this? We had a friend in common … we shared the same agent. Maybe just say we had a mutual friend … Sammy was great to have on set, he's so funny. We shot half in Bathurst and half in Sydney, and to have access to famous celebrity comedy people we tried to shoot as much as we could in Sydney, but we took Sammy all the way out to Bathurst to shoot and it was funny to see him out in the middle of a field in Bathurst. He's a really great improviser too, we got him to improvise a lot.

Are you from Bathurst yourself?

I'm from Sydney, but I lived in Bathurst for three years for university, and I've adopted it as my second home. It's such an interesting place, especially for someone from the city – it's only three hours out of Sydney but it's a completely different vibe, and the people are so much more laidback. And more interesting.

You were part of the team at Tonightly, which was controversially cancelled. How bitter are you right now?

I don't know if I can answer that … it's still very raw, but I can't see them bringing it back anytime soon, even though everybody is super hopeful. It was a really beautiful experience, and we had such an insane team working on the show, making new content every single day, dreaming up ideas in the morning and having them broadcast by nine o'clock. It felt like a family. It was sad to see it go. It was also unfortunate that the government just got interesting as we got cancelled.

What made you want to be funny as a career?

Definitely having depression. I started doing stand-up when I was in high school, and it was definitely because I was very sad at the time, I wasn't feeling like anyone was listening to me and I wasn't getting along with my parents. I wasn't feeling healthy at the time, and it's what drove me to get up on stage. But I think now it's more like, I really like showing people worlds that are different – through comedy showing people new things, things that are unique or haven't been seen before.

The Angus Project is on ABC Comedy, Tuesday, December 4, at 9.30pm.