The band’s famous 1985 gig at Wembley Stadium was one of the highlights of their career, and you can now have a proper gander at Rami Malek and the gang in character on that stage.

A new photo from #BohemianRhapsody. In theaters November 2, 2018. @officialqueenmusic @bohemianrhapsodymovie

A new photo from #BohemianRhapsody. In theaters November 2, 2018. @officialqueenmusic @bohemianrhapsodymovie

20th Century Fox has also released a picture of Malek’s Mercury in a pair of shades and a leather jacket alongside Brian May (played by Gwilym Lee).

Last year, we got a glimpse at behind-the-scenes footage of the Live Aid scene, which also includes Ben Hardy as Roger Taylor and Joseph Mazzello as John Deacon.

The movie has been in the pipeline for a long time, and has gained a lot of publicity for the behind-the-scenes drama, notably original director Bryan Singer being removed from the project last year.

“I wanted nothing more than to be able to finish this project and help honour the legacy of Freddie Mercury and Queen, but Fox would not permit me to do so because I needed to temporarily put my health, and the health of my loved ones, first,” Singer later clarified in a statement. 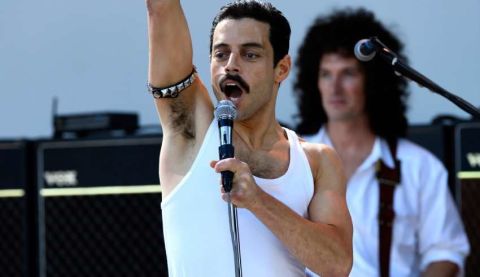 “Bohemian Rhapsody is a passion project of mine. With fewer than three weeks to shoot remaining, I asked Fox for some time off so I could return to the US to deal with pressing health matters concerning one of my parents.

“This was a very taxing experience, which ultimately took a serious toll on my own health. Unfortunately, the studio was unwilling to accommodate me and terminated my services. This was not my decision and it was beyond my control.”

He also hit back at rumours that he clashed with Malek on set as “not true”, though admitted they did have “creative differences”.

Bohemian Rhapsody is due for release on November 2 in the US and December 28 in the UK.

‘Ted Cruz’ Goes On ‘Britney Spears’ ‘Oops! I Did It Again’ Show To Apologize For Mexico Fiasco On ‘SNL’ — Watch