The last time I saw Anna McGahan was on a log in the bush, where she sat, fluorescent highlighter in hand, reading an academic text while waiting to shoot her next scene as Miss McGraw in the six-part TV series Picnic at Hanging Rock. 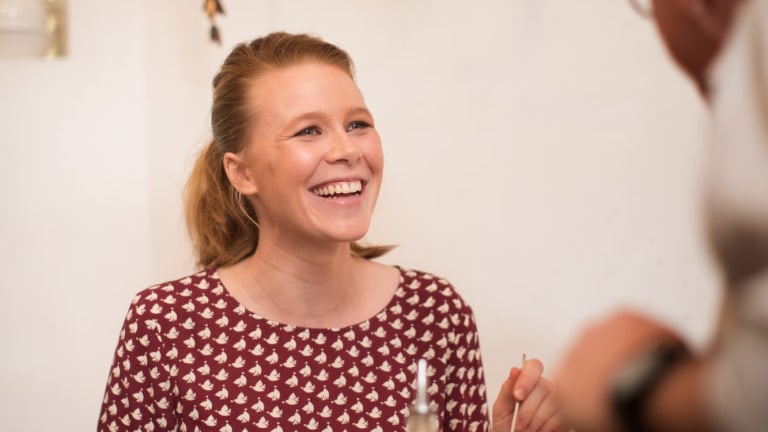 Anna McGahan enjoys the carbonara at Umberto Espresso in Thornbury.

She duly orders it, and isn't disappointed. "This is a revelation," she says between mouthfuls, which is just as well as today is her 30th birthday, and a rare outing with the baby, who was born seven weeks premature.

"One of us was bleeding out and they didn't know who," says McGahan, of the night she was rushed to hospital. Turns out it was the baby. "Had we not gone in that night, she probably would have been stillborn."

A stint in intensive care and two transfusions later, "she's so fine, which is a miracle in itself", she says. "We're very lucky."

Adding yet further to the blessing is the fact McGahan was in a serious car crash when she was just five weeks pregnant. "I turned into four lanes of traffic and was T-boned," she says, laying the blame squarely at her own feet. "I had only just found out I was pregnant – I think that's why I was so spun out." 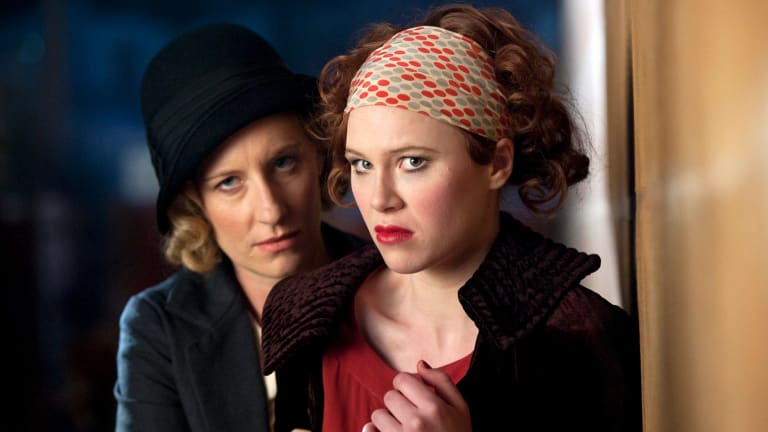 McGahan, who lives not too far away from this old-school Italian eatery with her husband Jonathan Weir, doesn't invoke the name of a protector or the notion of divine intervention in discussing all this. But she might well have, for she is that rarest of breeds, in this country at least: an actor who is openly, proudly, Christian.

That said, she is no dogmatist. 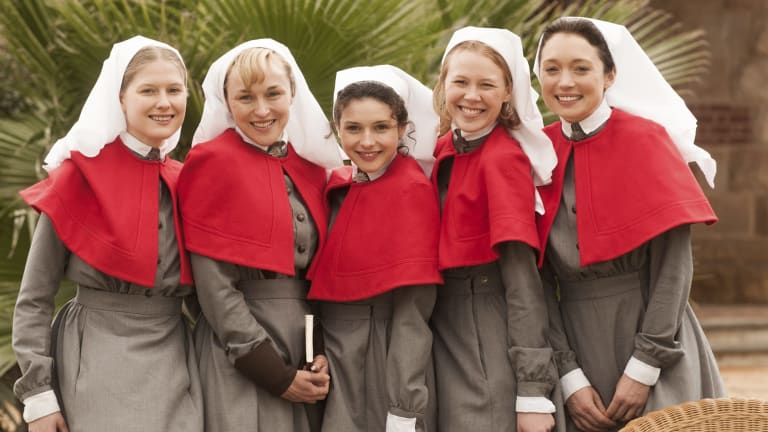 "I'm a Jesus believer, and it's exclusively that, but I don't feel I'm religious at all," she says. "I use 'spiritual' rather than religious. I go to a tiny creative Anglican church sometimes, but I don't find myself believing in denominations either."

McGahan was raised very slightly Catholic in Brisbane, but rejected it all in her teens. By the time she had set out upon the life of a thespian, the notion of faith was so far from her mind as to be utterly laughable. 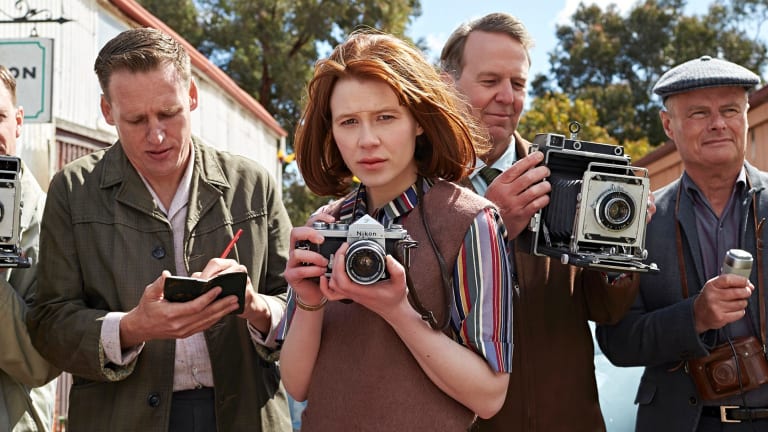 Anna McGahan as Rose Anderson in The Doctor Blake Mysteries.

"I'd gone to acting school, I was in a community that vehemently despised that stuff, and my understanding of Christianity was that it was bigoted. I was exposed to homophobia, I was exposed to people being really weird and fundamentalist about stuff, and to align myself with anything like that felt deeply uncomfortable."

McGahan – who came to prominence with her portrayal of jazz-era prostitute Nellie Cameron in Underbelly: Razor in 2011 – was in her own assessment a hedonist at the time, sexually adventurous, not averse to drugs, in and out of relationships with both men and women. 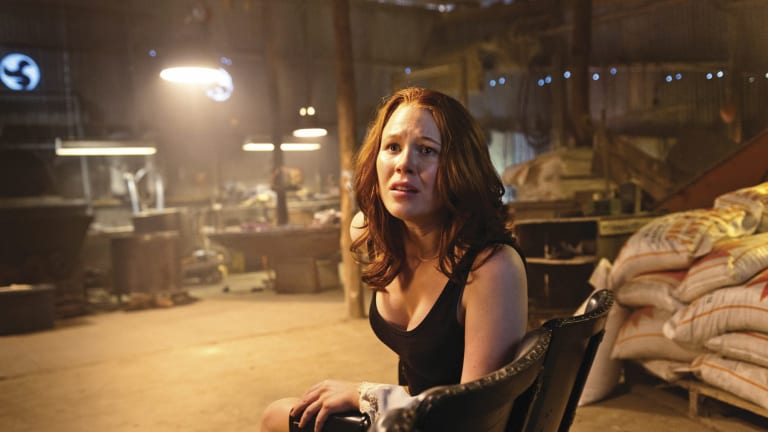 But while she appeared to be the embodiment of the free-spirited emancipated modern woman, she was in fact wracked with self-loathing. "I had a really, really aggressive eating disorder from the age of 14."

She doesn't particularly want to talk about it now, but she has written about it on her blog, A Forbidden Room. "It's not something I prefer to overly explain," she tells me. "It's easier when I write to go there."

This is how she put it in a post written three years ago: "I hated how I looked and how I felt. I hated my vessel, and no matter where life took me – from my psychology degree to acting school to the sets of exciting acting jobs – I felt the burden of my body continue to weigh heavy on the earth."

In May of 2012, everything changed. That's when she had her first clear encounter with God (just as with The Beatles' Rocky Raccoon, it involved a Gideon’s Bible in a hotel room; thankfully, the ending was far less bloody).

Was it an epiphany?

"Yeah, I'd have to call it that," she says. "The other word I use is 'metanoia', a Greek word that means complete transformation, change of mind. Because I hated it. I rejected it so completely."

Her first instinct was to pretend it hadn't happened. Alternatively, she thought, "I decide I'm crazy, I've had a psychotic episode and I should be admitted."

Or there was a third way. "I could open to it and go, 'OK, what if there was God', which I'd never previously considered."

That was the path she chose, though not without serious reservations. "To sit down and read the Bible I thought was wrong," she says. "Then when I did it I thought, 'Actually this is really beautiful, this is a text I can engage with, I don't have to eliminate my mind and put on this false stupidity in order to engage with it.'

"I didn't want to be brainwashed or to be wrong, and once I realised I could do it at my own pace and on my terms, and it could be much more spiritual than I'd given it credit for, it didn't have to be religious, that was a point of real freedom for me, where the discomfort gave way to liberation."

She has since said that the healing of her body came soon after. A few years later, and to some fanfare, McGahan announced she would no longer do any scenes featuring nudity. But that doesn't mean she's ashamed of Underbelly.

"I'm really proud of that job, I'm proud of that character, I don't regret it," she says. "[But] what I didn't understand was that I played into a system of objectification – and I had more power than I thought."

She has spoken about the way images from Underbelly were appropriated by pornographic sites, and she tells me that while she felt in control at the time – and never felt anything but protected by the show's producers – "I realised too late that I didn't feel comfortable, it was injurious".

She has tended towards more wholesome fare in recent years – ANZAC Girls, House Husbands and The Doctor Blake Mysteries – though Picnic's Miss McGraw doesn't quite fit that mould.

"The character is just laced with so much mystery," she says. "She is really the most curious of the four who go missing. She's holding out for a relationship with a student, she's clearly deeply repressed her sexuality and it's bursting out in these really inappropriate ways."

Though there's a sapphic undercurrent to this take on Joan Lindsay's novel, "I'm really proud of the fact it's not used for titillation. It's like it would have been back then – it's held back, just beneath the surface."

In spite of her clear preference for modesty, McGahan says she wouldn't completely rule out on-screen nudity for the right role (though she adds she finds it hard to imagine such a role).

"My job is to present humanity honestly, I believe, so if I were to censor that part of it I would be doing it a disservice," she says. "I get frustrated with fundamentalist perspectives on it, because if you censor sensuality or sexuality it's not human any more."

And this is the thing that's so interesting about Anna McGahan: while her leap of faith is hard for a confirmed atheist, or even an agnostic, to comprehend, there's enough intellectual curiosity and room for questioning in her version of it that it seems anything but blind.

Here's a for instance, again from her blog, which is full of long, thoughtful explorations of faith and personal morality as they relate to notions of loneliness, love, art and community.

Writing about the same-sex marriage plebiscite, she described herself as "both a queer woman and a deeply devoted Christian".

Over dessert – a classic tiramisu for me, panna cotta for her – I bring this post up, and ask if she really does think of herself as "queer", now she's married to a man to whom she presumably plans to stay married for life.

"Yes, because I don't think it's helpful, especially in the current climate, to be a person of faith who previously had relationships with women to be suddenly like, 'That's not me any more'," she says.

"What we noticed in the plebiscite was this profound divide, this polarisation, which I personally believe is not representative of our shared humanity, and I just don't think it's the answer. I think it's really grey."

Her self-granted label won't satisfy fundamentalist Christians, she knows, and it might ruffle some feathers in the queer community too, but so be it. "I guess it's my own small protest," she says.

McGahan has just written a book about her spiritual journey, and how it helped her to heal physically and psychologically. She wrote it while she was pregnant, after shooting season five of The Doctor Blake Mysteries, and she's hoping to find a publisher soon because it's a journey she thinks could help others.

"I guess what I'm trying to pitch," she says, "is that the relationship to your body and your relationship with God are somehow mirrored."

YouTube update brings new controls to iPhone and Android: here’s how to use them

Katherine Langford ‘Would Love to’ Return To Marvel Cinematic Universe!