Bree Elrod stars in the critically-acclaimed film ‘Red Rocket.’ She spoke EXCLUSIVELY with HL about Lexie’s love for Mikey, how the role fell into her lap at the perfect time, and more.

“There’s something about Mikey that is just — as much as she hates him — she finds him irresistible,” Bree told HollywoodLife. “I think that we all know people who are in relationships that are drawn to drama.”

When Mikey comes crawling back, he asks Lexi if he can crash at her place. From the get-go, there is major hostility between Mikey and Lexi. Bree loved working alongside co-star Simon Rex and developing this complex connection between their characters.

“I think we had one afternoon of doing that first scene, just kind of feeling it out,” Bree explained. “As soon as we started playing, I was like, okay, this is going to be great. This is going to be really fun because Simon is just so open and playful and game and willing to just explore together. That is such a gift as an actor to another actor. He’s just very generous, so we just had such a good time. It was really fun because when the cameras turn off we would just burst into laughter, especially in those last scenes where he’s leaving and the chaos ensues. Sean was very much like, ‘Let’s just play. You guys just go crazy.’ The fact that he packs up her Big Stripes cup, and she’s so upset about it. But at that moment, the stakes are so high. Of course, she would be upset that he’s taking the cup, and he knows how much her Big Stripes cup means to her. It was such a treat to be able to work with him and find our history together. I think that when you’re watching it, you can kind of feel like, ‘Oh, I get why these two would be together.’”

Even though Mikey gets wrapped up in a much younger woman named Strawberry, Bree still feels that Lexi knows him better than anyone. “I feel like in the world with Lexi he is most himself. He is the most no-bullsh*t, even though he’s lying to her,” Bree admitted. “He definitely doesn’t have to turn on anything. They have this familiarity and this history with each other, and I think there’s something really kind of beautiful and maybe toxic but also beautiful. There is a love for each other there and, and I hope that people will see that.” 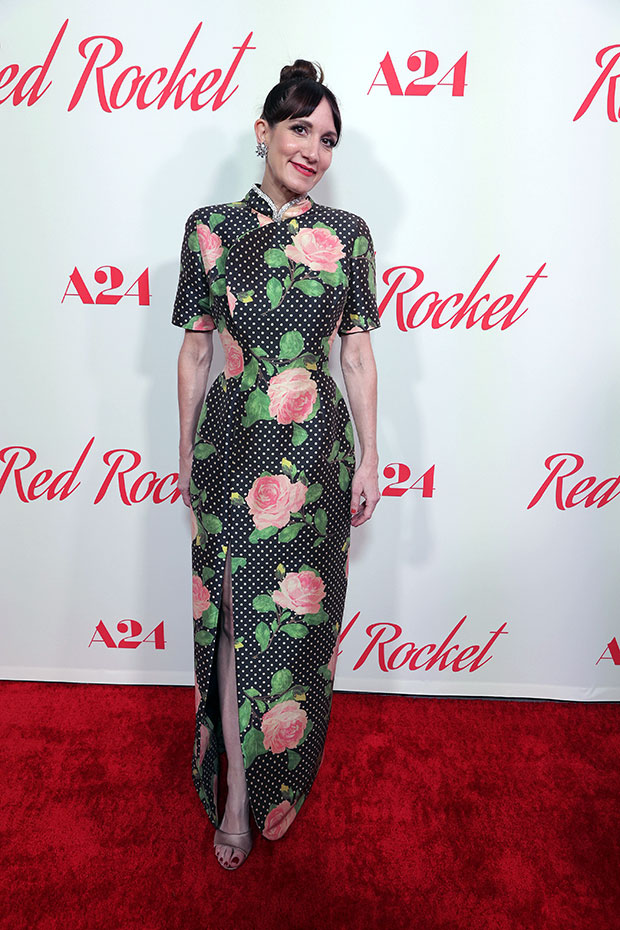 She continued, “Even in the intimate scenes, they are telling a story. So the first one, it’s familiar. They’re not even taking their clothes off kind of thing. And then the second one where she’s on top, it says she’s in control. I think she’s like letting herself feel some bigger things, and I do think she would not do that if she didn’t have some deeper connection with him. I really do think she loves him.”

As the actress explored the character of Lexi, she became “so fascinated by her life and kind of the hardships she has been through and how she still manages to find humor and some little moments of joy in the world and in home life. I was just really struck by that no matter what your circumstances are, you can always eke out a little bit of joy. I loved that about Lexi, and I love that she’s a survivor. I love that she does what she can to make ends meet, but yet she’s so loyal to her mother and to the people in her life. She’s got a really big heart. She’s sarcastic. She’s sassy. She’s strong. I really just was so taken by her.”

Her role in Red Rocket came about in the middle of the COVID-19 pandemic. Bree admitted she wasn’t sure what the future was going to hold for her because of the uncertainty of the pandemic’s impact on the film industry. “I was just kind of having this, as we all were, existential and heart-to-heart with myself,” Bree said. She was contacted by producer Samantha Quan. “She was like, ‘Bree, we were going to be working on this project in Canada, but it requires a lot of crowd scenes, so we’re having to pivot, which is the word of the pandemic. We’re having to pivot, and we are working on this passion project that Sean is very excited about. We were trying to come up with who we thought would be able to play Lexi,’” Bree revealed. “And she’s like, ‘I was working out this morning, and I just dropped my barbell and thought Bree Elrod could do this.’ She said she would love for me to audition for this, so they gave me this monologue that wasn’t part of the script because they weren’t quite done with the script yet. I worked on this monologue. She was like, ‘No makeup, just very natural. Just straight to the camera.’ I worked it up and sent it in and then a couple of hours later, she was like, ‘Sean watched a second of it and said that’s Lexi.’”

The most jaw-dropping moment of the film is when Mikey runs completely naked down the street. Bree admitted that she “lost her sh*t” the first time she saw it on the big screen. “I think Simon and I watched it together for the first time together,” Bree told HollywoodLife. “A24 got us a screening room before we went to Cannes because we both were like, ‘We’re not going to Cannes and watching this for the first fucking time. We need to see this thing.’ I was sitting next to Simon and I think when that moment happened, I literally stood up. I was like, oh my god. I was so overwhelmed. I thought it was so genius. I had heard how precarious it was to film that because it’s right by these refineries and even though Sean and everyone had tried to get permits from the local authorities or whatever, they were like, eh, whatever. All of a sudden, Simon Rex is just running naked down these gravel roads. I lost it. I thought it was brilliant.”

'Love & Marriage: Huntsville': Will Martell Holt's Mistress Ever Appear on the Show?

Son, 52, appears in court over ‘murder of terminally-ill mother, 79’