Riverdale season two has finally solved the mystery of Betty’s long-lost brother Chic who showed up after the midseason break.

Hart Denton has been talking to EW about even he was in the dark about the true nature of his character. “I did not know this for the long haul. Everything was kept pretty close to the chest by [creator] Roberto [Aguirre-Sacasa] and the writers,” he outlined.

But now Denton and Riverdale fans know the dark truth that Chic was hiding and we’re about to go into spoiler territory after the photo. 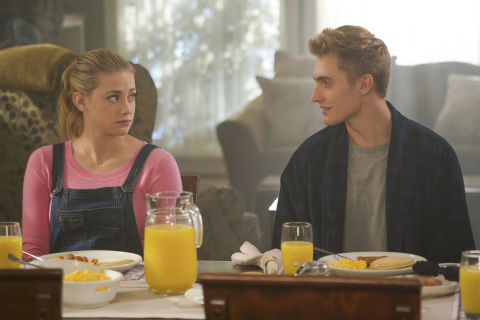 The latest episode revealed that Chic is not in fact the long-lost love child of Alice Cooper (Mädchen Amick) and FP Jones (Skeet Ulrich), but actually the real child’s former roommate who may, or may not, have killed him.

Chic told Betty and Alice that the real son overdosed on Jingle Jangle, but whether or not Betty believed him, she ended up turning Chic over to the Black Hood and Denton isn’t telling us if he’s actually dead.

“I think we’re going to have to wait and see,” he teased. “She does what she has to do to protect her family, of course. That’s the MO with Betty at all times. But we see the heart that she has.”

Some viewers had been thinking that Chic might be the Black Hood, especially after the serial killer made a devastating return in the musical episode, but the latest developments seemed to have ended that theory.

“I never thought I was the Black Hood. I thought maybe I had some sort of association or affiliation with it. I had asked a few of the writers and Roberto about that, and they never even made it seem like that was anything that I was necessarily a part of,” Denton outlined.

“But I liked that. I like that I’m not a good guy, necessarily, but I’m not the Black Hood. So there’s some middle ground there, where there’s a bit of room for redemption.”

Riverdale airs on The CW in the US and Netflix in the UK, with season one also currently showing on 5STAR.

Who is Real Housewives of Cheshire star Nicole Sealey’s husband Joe? Here’s everything you need to know

Michael B. Jordan Looked Into The Camera At The MTV Movie & TV Awards & Twitter Could Not Deal

Tens of thousands of Covid fines should be reviewed as they are 'muddled, discriminatory and unfair', MPs blast