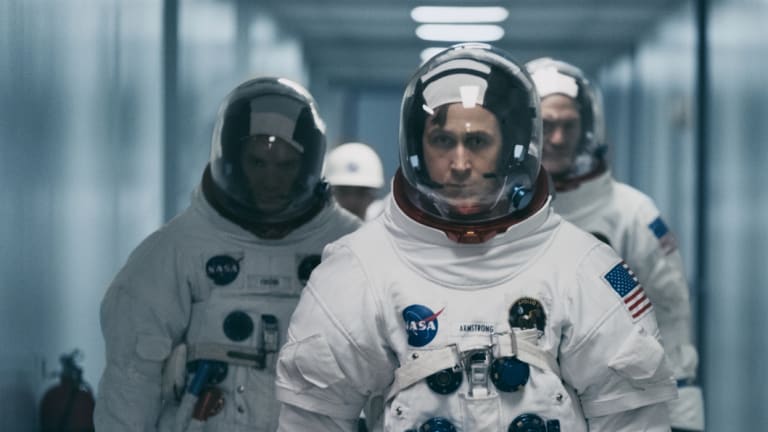 “Ever since I knew what the Moon was, I’ve known someone called Neil Armstrong walked on it,” said Ryan Gosling. “But I knew very little about him or his family or their story.”

He knows a whole lot more now: Gosling plays Armstrong on the big screen in his latest film, First Man. It's the second he has made with Damien Chazelle after the Oscar-winning musical La La Land.

In that film, he was a charming jazz pianist who danced with Emma Stone on Mt Hollywood Drive. In the new film, which opened both the Venice and San Sebastian film festivals last month, he plays the taciturn astronaut nursing a grief kept well hidden from the public. 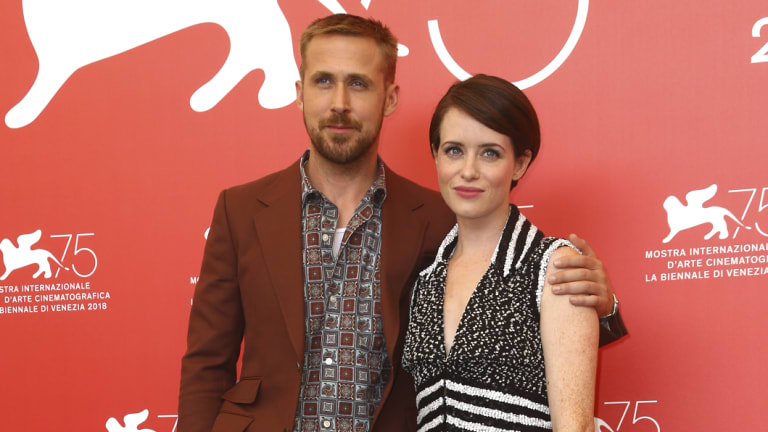 “Neil was a very layered person and to a lot of people he worked with he seemed unknowable – remote, I guess,” Gosling told Fairfax Media in San Sebastian.

“But it was very important to his family and the people who knew him well that we find a way to peel back those layers and find the man behind the myth. He had extraordinary qualities.”

Chazelle divides the viewer's time between rocket science and Armstrong’s relationship with his sons and wife Janet, played by Claire Foy (The Crown). 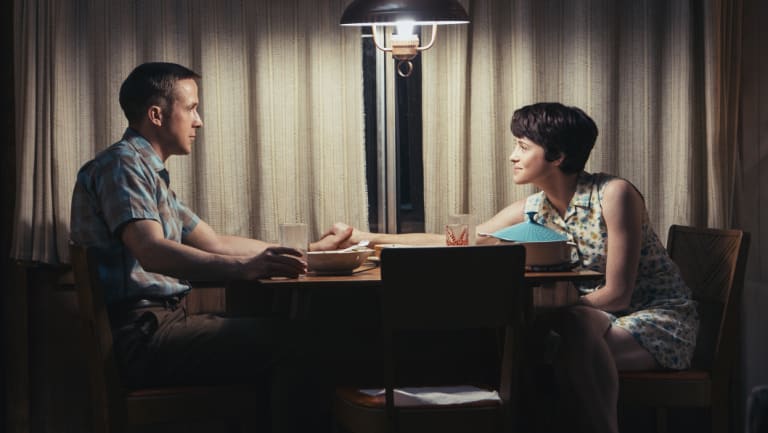 Gosling and Foy in First Man.

“I had a much easier job because Janet’s story is one that is untold and that people don’t recognise any ownership over,” said Foy.

“Specifically, I wanted to give a voice in the film to those women who stayed at home and gave support [to their working husbands].”

Much of the period flavour of First Man comes from its focus on the significance of the space race to Cold War manoeuvring against Russia. Controversy erupted in the United States after the film's world premiere in Venice, when it was pointed out that the ultimate moment of victory – when Neil Armstrong stuck the American flag in the moondust – was not included. 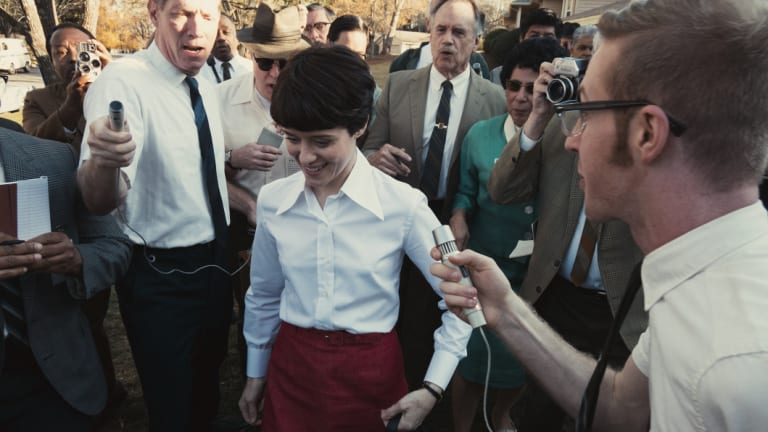 Foy says her job was easier, as her character’s story is not well known.

In the storm that followed, Donald Trump said he would never see First Man, given its want of proper patriotism.

Does Gosling care? There was a long pause before he answered: “I think the discussion around this is, in general, almost entirely among those who haven’t seen the film and I am really excited it’s coming out, because I think the film speaks for itself.”

There was some irony in his caution at San Sebastian, where one film after another took aim at political and police corruption, many of them made in countries where criticism is risky and funding for film has been cut to shreds. 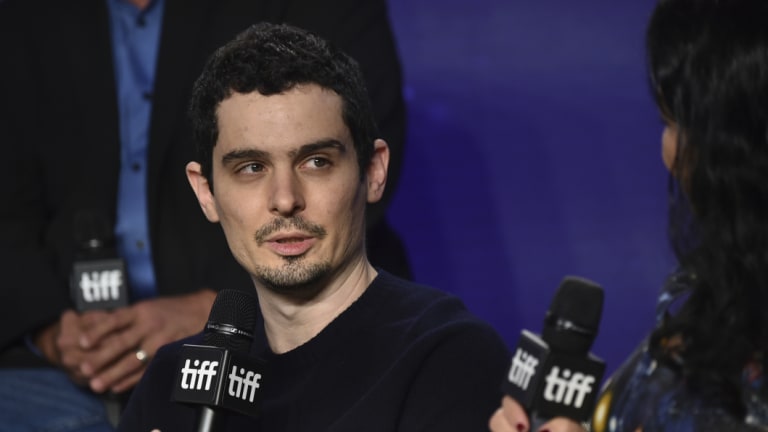 From the Philippines came Brillante Mendoza’s Alpha: the Right to Kill, a faintly fictional story of an underpaid officer in Duterte’s anti-drug squad who takes cuts from drug deals in the slums, shooting anyone who might suspect him. It took the Jury Prize.

One of the biggest winners, Rojo, with several prizes, is set in Argentina in the 1970s and shows the crumbling of the rule of law and codes of morality that paved the way for fascism. Director Benjamin Naishtat pointed to current parallels; only a few days before his film screened, he said, Argentina’s right-wing government abolished the ministry of culture that helps fund films like his.

Paradoxically, however, these troubled times are giving rise to a new vigour in Latin American cinema; Argentina alone had 13 films across different sections of the festival.

Perhaps the film that created the greatest ruckus among audiences was The Realm by Rodrigo Sorogoyen, which took deadly aim at Spanish regional politicians lining their pockets – or, more accurately, the vaults of Zurich banks – with purloined European and local funds.

Shown early in the festival, the vigorous and heartfelt drama could be read as a declaration that Spanish cinema – which a few years ago reached a nadir of dross cooked up in tax shelters – has got its mojo back.

Between Two Waters, a strong story about a Roma family, played as drama by the real people on whom it was based, won the festival’s top award, the Golden Shell. Filmmaker Isaki Lacuesta last filmed the family 12 years ago; since then, one son has spent three years in prison while his brother joined the army.

The San Sebastian Film Festival is the world’s biggest showcase for cinema in the world’s most widely spoken language, but plenty of international stars followed Gosling to this Basque resort.

Bradley Cooper, who is touring the circuit relentlessly with his own version of A Star is Born, refused interviews but gave a lively press conference where he paid tribute to Warner Bros for trusting him but made it clear that even if you don’t live in Argentina, it isn’t easy to make the film you want.

Among other subjects, A Star is Born is “about finding your voice, given how hard that can be,” he said. “So many people, I find, are telling you what your voice already is.”

Clearly, there are expectations that Cooper’s voice and hard promotional work will pay off at the Oscars; for the locals in San Sebastian, it was enough just to have him around. No audience in the world could be more enthusiastic (the most obscure Romanian director will be greeted with whoops and cheers) or more attentive.

One journalist asked Gosling what it’s like to be mobbed every time he gets out of a car.

“I hate to disappoint you, but it’s not like that every time I step out of a car,” he said wryly. “I spend most of my time trying to get car-seats in and out.

"The reception we have had here is special. Unique.”

First Man and Bad Times at the El Royale are both in cinemas from October 11. A Star is Born opens October 18.

I'm an air fryer expert – I make everything from cookies to pizza in mine, here's how | The Sun