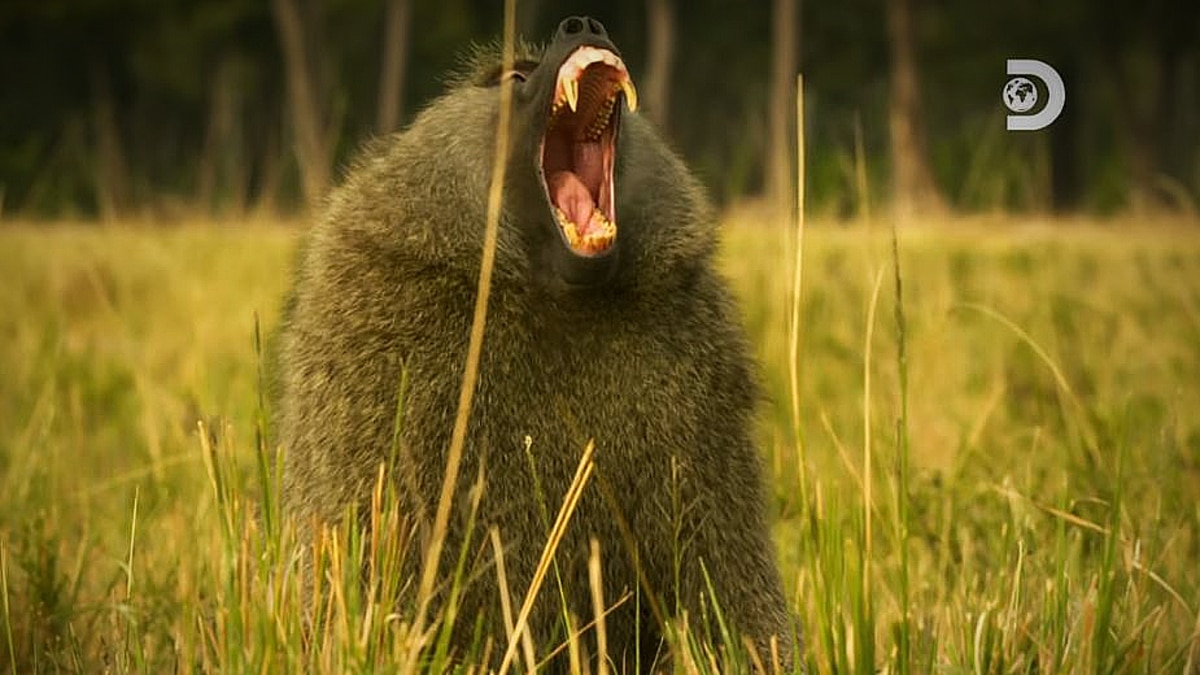 Bakari the male baboon is the heart and soul of Serengeti if you ask the narrator, Lupita Nyong’o.

And on Sunday, Serengeti’s Episode 4 is titled “Misfortune,” which augers poorly for a potential animal storyline in Discovery’s epic real-life Lion King. The heart-stopping action that is teased in our exclusive clip below shows that he is finally forced to challenge the relentless baboon leader, leaving him with a devastating decision to make.

Our lovelorn Bakari is in competition for the heart of Cheka, a female with a baby whose presence and company has been usurped by the leader of the group. But Bakari will not back down and will not leave Cheka, and it does not go unnoticed. Especially when Cheka seems to prefer Bakari, which sends the leader into a stalker-like craze as he tries to dominate her and charge after Bakari.

The baboons almost resemble wild dogs or wolves with their running stance and teeth and snout shape.

Nyong’o was interviewed by the Associated Press and she showed her hand when it came to picking favorite storylines: Bakari won that round.

“It’s kind of the springboard for his entire arc in the series, but what I love about Bakari is the learning curve he goes on. … It’s really, really, really touching to witness his journey, that’s my favorite.”

Watch as Bakari is threatened by the leader of the troop when their rivalry escalates and the baby is put at risk. His only hope is a kind-hearted female named Cheka.

As we have seen, Bakari is embroiled in a jealous rivalry after Sabira was stolen away by the aggressive leader. Bakari attempts to win the new female, Cheka, who is raising the baby.

Lupita Nyong’o explains as we watch the clip, that it’s a dicey situation for Bakari and the baby, as Cheka is chased down by the angry alpha male in a show of force.

“But the baby can’t hide his feelings. And doesn’t realize he’s making things worse.  Yet again, Cheka saves him. And Bakari puts himself between Cheka and the leader. But this only enrages him more. If he wants Cheka, he’ll take her. Cheka resists. And Bakari will be punished for her rejection of him. Shaken, the family regroups… but now the leader is determined, he WILL have Cheka. And Bakari WILL pay the price.”

Also on Sunday’s episode, the rains have stopped and the resources start to tighten up. The arrival of the Great Migration brings food in but also puts the Serengeti families to the test.  And a trip across a river in order to collect crocodile eggs proves dangerous.

Lioness Kali must decide whether she can return to the pride that ostracized her. Shani, the zebra mother, must cross the river with her foal, but a crocodile is waiting and watching.

Jasari and the wild dog family face a battle against Zalika and her clan of hyenas for claim over the territory. Teenage Tembo the elephant must now leave the herd as his matriarch mother must decide his future.

In our interview, Downer agreed with Lupita Nyong’o that the baboons were his favorites and of all the family stories, the one that resonated the most.

“I think the baboons. They are very close to us, obviously.

Even researchers have studied them and their behavior to inform our lives because you can see even when a male is deposed and he starts to just become this dejected figure and just crushed and doesn’t survive long.

There’s research being done on that I’d read about and you are seeing it before your eyes. These changes and also the emotional connection and how if you’re a baboon, and you are a teenage baboon, you have to leave your group and find another troupe.

There’s a very good reason for that. Most teenage males have to for reproductive reasons, they have to. But to even get into another troupe, that male has to befriend a female. And it’s a friendship. It’s not necessarily sexual. It might become sexual, but it’s a friendship.

That’s what I think people don’t really understand, and that’s what we are trying to make people understand, that those friendships and relationships underpin everything. And with baboons [it is] very intense and so human-like.”

Tune in Sunday to see how the drama ultimately unfolds.