Home » TV & Movies » Sistas Recap: Bayo's Secret Comes Out — And It's Not What We Expected

We never could have guessed that the biggest twist on this week’s Sistas would come courtesy of *triple-checks notes* Bayo.

Wednesday’s episode, which we’ll break down more fully in a moment, ended with a couple of lookie-loos sneaking photos of Danni and Sabrina at the supermarket. Naturally, Danni assumed that the grocery gawkers had their eyes on her, but that wasn’t the case.

It turns out that Bayo really is royalty! And not only did his date with Sabrina make front-page news in his home country, but there’s also speculation that she might become his future bride!

Ladies and gentlemen, in the ongoing battle for Sabrina’s heart, the odds just tipped dramatically in Bayo’s favor. (Sorry not sorry, Calvin.)

Elsewhere in the Sista-verse this week… 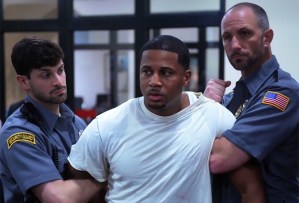 * I appreciate Zac’s commitment to Fatima, but this fool is doing himself no favors. Sure, it was fun watching him beat the crap out of Hayden at his own place of business, but was it really worth getting thrown in jail again? Come on now. Even if Zac was 100-percent correct about Hayden being a miserable troll, there’s a way to take him down — and this isn’t it. For the sake of the viewers’ entertainment, however, he and Fatima really are wonderfully reckless. A perfect pair.

* Then again, do consequences really exist on this show? After all, Fatima is now a free woman after two phone calls from Robin, who put a big ol’ smile on Andi’s face when he returned at the end of the hour. I wasn’t totally sold on Robin yet, but after watching that weasel Hayden call Gary to report Robin’s return, I’m throwing my full support behind him. Gary needs to get gone, even if that means Andi will have to give up an apartment so fabulous it would make Carrie Bradshaw crap her pants on sight.

* Karen confided in Andi that she hopes her baby is Zac’s because she isn’t ready to cut ties with him just yet, forcing Andi to drop a much-needed truth bomb: Zac has moved on with Fatima, and Karen needs to do the same. (Well, she doesn’t need to move on with Fatima. Ugh, you know what I mean!) A humbled Karen then admitted to Aaron that she doesn’t want him to be the father because she doesn’t know him well enough. He countered by saying that he knows she loves him, which pretty much dismissed everything she just said, but I appreciate his tenacity.

* Friends, do we hate Calvin? He said he’s thrilled to have Que staying at their place after hearing his story, and he insisted that “grumpy old Maurice” will eventually come around. Sir, Maurice is not grumpy. He was robbed at gunpoint by this man, who’s also using his sexuality to take advantage of him, and you’re willing to shrug that all off because this guy had a tough upbringing? Calvin may think he has fashion sense, but the man is severely lacking in common sense.

* And then there’s Preston, who “accidentally” showed up at Danni’s house to pick up his box o’ crap ahead of schedule. This forced the two into an awkward chat, one that almost ended with him relaying his true feelings about her… until Sabrina interrupted them.

Your thoughts on this week’s Sistas? Drop ’em in a comment below.