The reset button is a hallmark of animated family comedies. Buildings get leveled, lives get imploded, communities get upended and then everyone mostly goes back to normal. On that level, the Hulu series “Solar Opposites” knows exactly how to crack a crate of eggs and zap them back intact, all in a tight 20ish minutes.

It’s that skill for mayhem and resolution that’s intriguing and a tiny bit frustrating at the same time. Unlike modest restauranteurs or frustrated suburban nuclear families, “Solar Opposites” has a quartet of Shlorpians at its heart. Season 2 continues the trend of these four aliens settling into a comfortable existence despite making no reasonable attempts to fit in (or avoid murdering fellow residents with reckless abandon). After an opening set of episodes that laid the groundwork for how all of them manage to fit in, Season 2 continues by straying as little as possible from that template.

Korvo (voiced by series co-creator Justin Roiland) is the detail-oriented team leader. Human culture enthusiast Terry (Thomas Middleditch) is the absent-minded slacker. Disaffected teen Yumyulack (Sean Giambrone) is quickly becoming a terror to everyone at his otherwise-unassuming junior high school. As inventive as “Solar Opposites” is in spurts, Season 2 shows how much the main four characters are relatively indistinguishable from each other. When trouble inevitably comes to the group (almost surely through one of their own decisions/mistakes), equilibrium gets restored by everyone reacting pretty much the same way.

The main exception is Jesse (Mary Mack), who emerges as the main Season 2 bright spot. Where her other three compatriots become increasingly defined by misanthropic grumpy rabbit holes, Jesse is the counterbalance keeping the show’s overall spirits up. It’s Mack’s curveball energy and Roiland’s versatility (he also voices another character who returns after an opening season one-off) that help keep “Solar Opposites” from sagging in the alien corner.

This is a creative team that certainly sprinkles some gems here and there (that one of the local hangouts is called the “Gretchen-Darth Mall” is still blissfully good), but so many of these episodes feel like eating a meal made entirely of cake. By the end of Season 2, the show is so locked into its winking, reference-saturated approach that anything straying from that ends up a respite. “Jesse and Yumyulack try to explain BDE” is something that might work in a pitch session or even on paper, but in practice it just falls flat. When the show reaches back to the ‘80s or ‘90s for parody fodder, there’s something about that process that never yields something as sharp as this team is capable of doing. “Solar Opposites” goes to the “cameo from celebrity voiced by someone other than the celebrity” well enough times that it registers when the show does build around something more universally accessible. 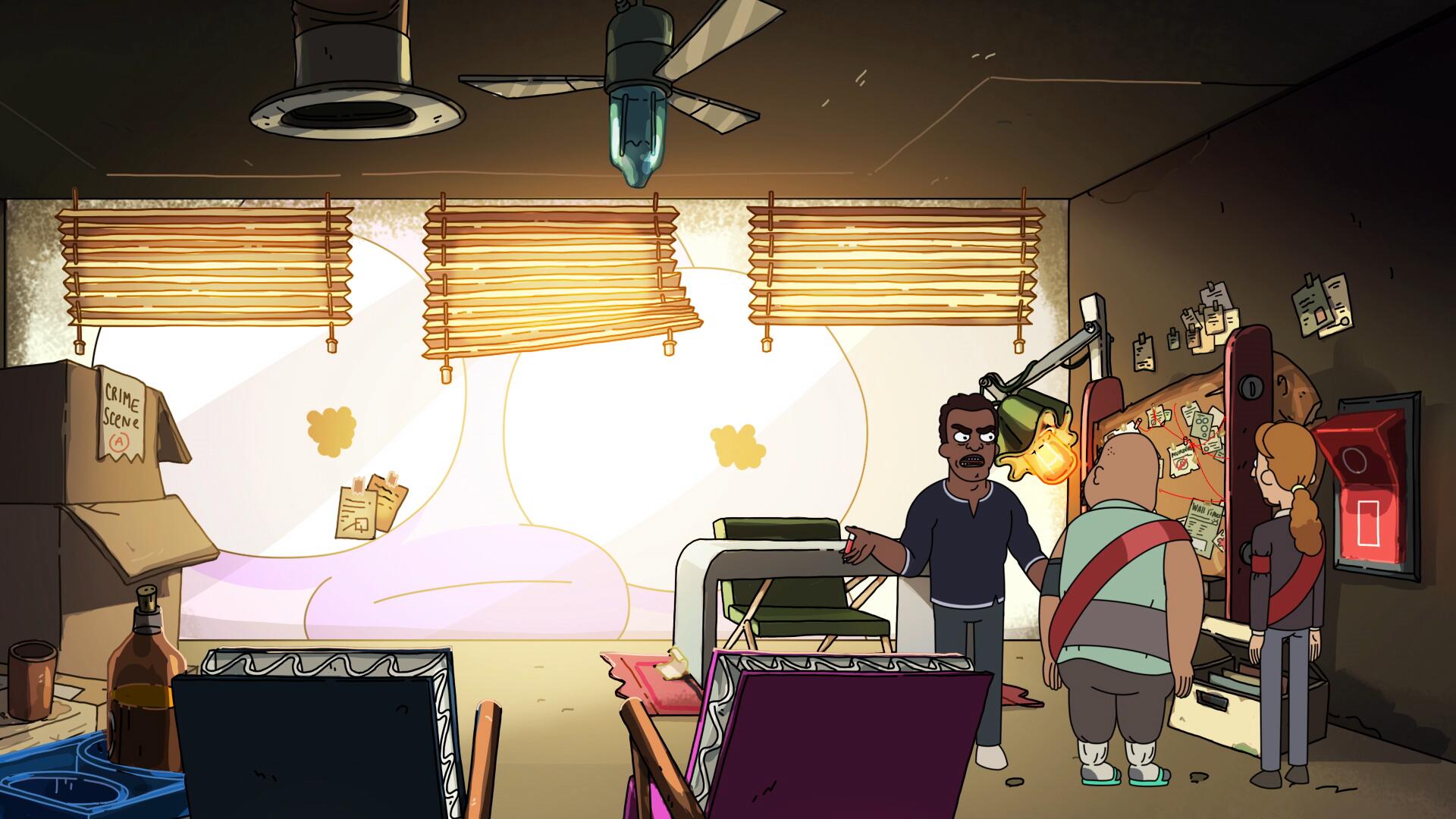 So the biggest, most welcome diversion in this “Solar Opposites” world is The Wall, the terrifying self-contained society made from Yumyulack’s ongoing human-shrinking adventures. This miniaturized world of scavenging and factional violence gave rise to one of 2020’s most memorable episodes of any show, the surprisingly emotional story of one unassuming newcomer’s dark revolution against the Wall’s existing power structure. That operatic peak gets swapped out for a season-long serial killer arc that does one very smart thing: cast Sterling K. Brown. As with last season, the nested Wall narrative is the show’s high point, particularly when it takes centerstage.

Chaos and destruction is baked into the greater “Rick & Morty”/“Solar Opposites” ethos at this point (as will almost certainly be the case for “Koala Man”). So it’s not all that surprising to see so many of these Season 2 episodes devolve into the central figures just getting destroyed in matter-of-fact style. Nothing against alien hell beasts ripping through city infrastructure with reckless abandon, but when it becomes the default, there’s less and less to latch onto with each passing adventure.

But even when it’s on autopilot, there’s still a reveling in visual detail that’s consistently a reason to keep watching. The suburban color palette is the background against which all of these destructive quests play out, but any time a Shlorpian pulls out a weapon that anthropomorphizes inanimate objects or reorganizes the molecular structure of rats, all those consequences fly by in a hail of purples and oranges and blues that do really shine. The sheer number of tiny component parts that make up life inside The Wall point to an incredible amount of effort of both design and execution that pay off in every frame.

One late episode in Season 2 flips through a group of people that the Shlorpians have wronged in their own ways. That “Solar Opposites” keeps finding new ways for them to reduce other people’s existence to rubble is an achievement in itself, even with only 16 episodes gone by. The more that becomes a cornerstone of the series, the more those tiny glimpses into those other lives become desirable. Even the group’s largely-silent Pupa gets relative short shrift. Their enigmatic terraforming pet stays out of the way, a shame considering how much their caretakers have managed to stay roughly the same.

“Solar Opposites” Season 2 is now available to stream on Hulu.

Supergirl First Look: Winn's Back From the Future, and He's Got a Super Suit!

Elon Musk: I know more about nuking Mars than scientists

Chilling Adventures of Sabrina: The 10 Most Insane Moments From Part 2