Home » TV & Movies » Spider-Man: Into the Spider-Verse trailer introduces Spider-Gwen to the movies

The first trailer for Spider-Man: Into the Spider-Verse promises that this film will be unlike any other big screen Spider-Man outings.

The animated feature, co-written by The Lego Movie’s Phil Lord, introduces you to a whole new universe of Spider-Man characters, including Spider-Gwen.

Instead of focusing on Peter Parker as the main protagonist, Into the Spider-Verse is all about Miles Morales (voiced by The Get Down‘s Shameik Moore), a young kid from Brooklyn who hases the same Spider-Sense powers.

As Miles explains: “In your universe, there’s only one Spider-Man but there is another universe, that looks and sounds like yours — but it’s not.”

The trailer show Miles hooking up with an older and wiser Peter Parker, who will come to act as his mentor, showing him how to hone his powers and introducing him to another world of superheroes.

Along with new villains, this universe also includes a different version of Gwen Stacy (voiced by Hailee Steinfeld), who has been bit by the radioactive bug and is now Spider-Gwen. 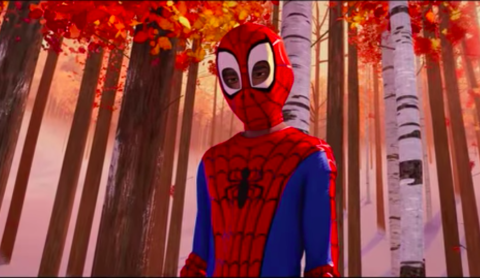 Spider-Man: Into the Spider-Verse hits theatres on December 14, 2018.

Spider-Man’s next live-action outing will be the sequel to Spider-Man: Homecoming, starring Tom Holland, which is expected to be released on July 5, 2019.

Angela Rippon opens up about her interview with Diana and Charles

Hot Damn! These Sexy Photos Prove Iskra Lawrence Can Rock a Swimsuit Like No Other

Ashley Lands on Double Shot at Love: Will this adrenaline junkie excite or scare the Jersey Shore bachelors?