Stephen Mangan has spoofed The Handmaid’s Tale in an opening sketch for the BAFTA TV Craft Awards 2018.

The Episodes actor was in attendance at the awards on Sunday night (April 22) where he was on hosting duties. Before then, however, he managed to wangle a crafty little short of his own.

And the results are definitely interesting. Take a look below:

“I am a handmaid,” says Mangan at the start of the clip. “A BAFTA handmaid. My name is Ofcom.

“I’m forced by my dystopian overlords – the BAFTA committee – to perform all kinds of degrading tasks, like playing Scrabble late at night with Joseph Fiennes and spending hours in terrible isolation, watching dehumanising propaganda.”

“Under BAFTA’s eye,” he says at end of the sketch. 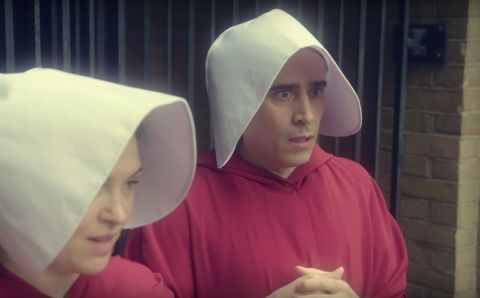 The awards ceremony saw the best behind-the-camera talent in British television go head-to-head. And the results were as unpredictable as ever.

Power Crew Member, 63, Dies After Being Struck by SUV on Location of Starz Series

Armie Hammer Has A MOHAWK Now! And An Outfit To Match!

Pimlico Plumbers to introduce 'no jab, no job' vaccine rule into work contracts