If you’ve enjoyed Netflix’s vibrant, refreshingly un-gritty revamp of Lost in Space, you’re probably at least vaguely aware of the original ’60s series: a camp and colourful adventure serial that aired for three years from September 1965 to March 1968.

You might also be primed on the first attempt to revive the franchise: 30 years after the TV show departed our screens, Hollywood gave us a big-budget reimagining. Now best remembered as the film that failed to launch Matt LeBlanc as a movie star, 1998’s Lost in Space movie was a moderate box-office success but was slated by the critics, who called it “dumb”, “meandering… and lifeless”.

While promoting his AMC series The Terror, Jared Harris – who played the adult Will Robinson in the film – even told Digital Spy that he’d tried to have the film “scrubbed” from his IMDb page.

Ouch. Thank goodness, then, for Netflix’s perfectly-judged revival, which we described as “exhilarating” and “a true blockbuster” – though there’s been no official word yet from Netflix, a second season is almost certainly in the bag. 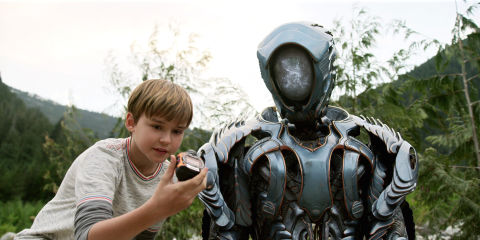 But even the most fervent Lost in Space fan might not know that there was actually a fourth version in development, after the disappointment of LeBlanc In Space but before Netflix saved the Robinson family from being lost in obscurity.

The Robinsons: Lost in Space was a new TV version ordered in 2003 by The WB network – now defunct, but at the time the home of Gilmore Girls and Smallville.

Providing a sense of continuity was original-series returnee Dick Tufeld, once again providing the voice of The Robot. Otherwise, though, this version of Lost in Space was something of a departure, taking various liberties with the source material. 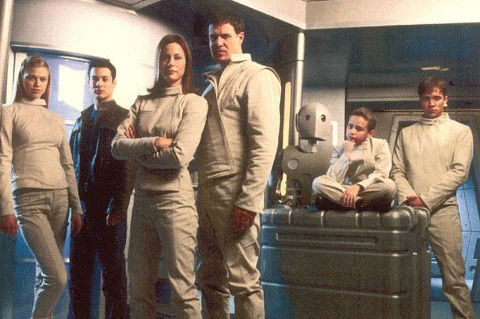 John Robinson (played by Brad Johnson) is reimagined as an intergalactic war hero rather than an astrophysicist, while Penny Robinson, an 11-year-old in the original series, is portrayed as an infant.

The scheming Dr Smith is entirely absent, with the pilot episode introducing a new character in the form of older Robinson child David (Gil McKinney), who ends up – you guessed it – lost amidst the chaos when the family’s craft comes under fire from aliens.

The planned series would, presumably, have followed the Robinson clan as they searched the cosmos for teenager David, like an intergalactic version of The Missing. But it was not to be.

The remake didn’t do enough to impress The WB and failed to secure a series pick-up. (The network itself shut down two years later, with select programs from it and competitor UPN moving to new channel The CW.) 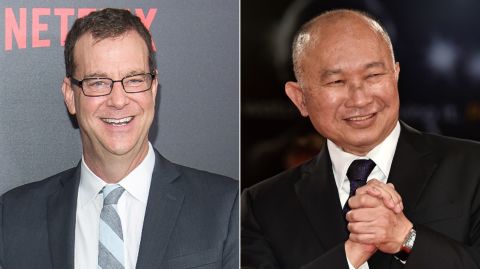 [Above: Douglas Petrie and John Woo]

Written by Douglas Petrie (then best known for his work as a writer/producer on Buffy the Vampire Slayer and later a showrunner on Daredevil and The Defenders) and co-starring a pre-Friday Night Lights Adrianne Palicki as Judy Robinson, the pilot was never aired (though it’s since leaked online).

Perhaps the most interesting thing about The Robinsons, though, was who was sat in the director’s chair for the pilot: none other than Hong Kong filmmaker John Woo (Hard Boiled, Mission: Impossible 2), making a rare (and, to date, his last) venture into television.

(How do you do slow-mo doves in space?)

Though it failed to inspire a series, The Robinsons: Lost in Space didn’t end up being total loss, and not just because it kept the flame alive in the years before the Netflix version. Sets from the pilot were purchased by the producers of the new Battlestar Galactica series that same year, being redesigned and used for scenes set on the Battlestar Pegasus.

So at least some of the work behind this failed venture saw the light of day, and in a successful update of an old science-fiction TV classic. Oh, the irony.

Patti Lupone Lets Fans into Her At-Home Lockers for Her 71st Birthday: 'I'm a Little Hungover'