Strictly Come Dancing‘s Joe Sugg landed a near-perfect score on Saturday as he and professional dance partner Dianne Buswell impressed with their Quickstep, and that’s enough to get anyone a little choked up.

If you ask Joe himself though, as Zoe Ball did on tonight’s (November 22) It Takes Two, he has a bit of a different reason for welling up as he heard his scores.

And no, it wasn’t because his Nana was in the audience.

“It was the costume, it was quite tight around the neck. It was squeezing me a bit,” Joe joked, before getting a bit more serious.

“It was when we had just come off, and all the hard work we had put in and the hard work that Dianne does to get me to that level, especially with all my family in the audience. It’s a big old mixture.

“And then when Claudia says: ‘Are you alright?’ As soon as someone says that when you’re already on the edge, it just sends you right over, so thanks for that Claudia. It’s Claudia’s fault!” 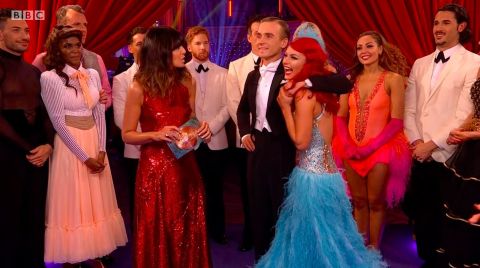 This weekend Joe and Dianne will be aiming for a perfect 40 when they dance street and commercial as part of their Couple’s Choice to the tune of House of Pain’s ‘Jump Around’ – and yes, there will be jumping around.

“There’s a lot of things that could go wrong,” Dianne added.

We’ll find out if anything does when Strictly Come Dancing continues on BBC One at 6.50pm on Saturday (November 24).