Superman & Lois returned to The CW for its second season on Tuesday, introducing a new enemy, a new friend (with benefits) and an otherworldly mystery that will continue to unfold in the coming weeks. Let’s dive right in, shall we?

Much of the drama in this first hour came from Lois’ inability to wrap her brain around the Natalie situation, constantly ping-ponging between feeling like she should be drawn to her daughter-from-another-earth and wondering why she isn’t.

“It’s the weirdest relationship you can imagine, such a bizarre situation,” showrunner Todd Helbing tells TVLine. “They’re both emotionally strong women, so it was interesting for us writers to explore what the reality of this would be. How would you respond? You’d like to say that it’s like Lois getting the daughter she lost, but she never really had a daughter. It’s not the same. And for Natalie, that’s not her mom. We just wanted to get into what that would really feel like for both of them.”

The whole ordeal forced Lois to reflect on her relationship with her own mother, whom she hasn’t forgiven for abandoning the Lane family all those years ago. But now, with Natalie around and her feeling nothing, Lois began to wonder if she isn’t more like her mother than she thought. Clark assured his wife that she’s nothing like that, but it sounds like we may get to be the judges of that ourselves. Helbing confirms that we’ll “probably meet [Lois’ mom] at some point in the future,” though he clarifies, “I don’t know about this season. Possibly.”

“You learn a lot about the Lane family this season,” Helbing adds. “You learn about [Lois and Lucy’s] childhood, and you learn why Sam, Lois and Lucy are the way they are. When Lois talks to Clark about her mom leaving, that’s a foundational shift. It explains everyone’s attitude, and why Lucy wasn’t talked about in Season 1 or why Lane has never talked about his wife. [Her departure was] a pivotal moment in all three of their lives, when they all started to go down different paths. You’ll learn about what that did to Lucy’s psyche, and the road it took her down.” (If you haven’t already, click here for our exclusive first look at Jenna Dewan’s return as Lucy!) 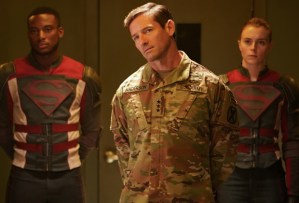 Meanwhile, Superman found himself at odds with Lt. Mitch Anderson (played by Tyler Hoechlin’s Teen Wolf pal Ian Bohen) over where his super-powered allegiance lies. For example, the smarmy Army man wasn’t thrilled that Clark [A] saved a nuclear North Korean submarine and [B] returned it to its native soil, no questions asked. When Superman made it clear that he’s a servant of the world, not just of the United States, Anderson asserted that “America can have more than one Superman.”

And that wasn’t just talk. The episode introduced us to a pair of super-powered recruits (rocking suits rudely emblazoned with the House of El’s iconic symbol!) who assisted with the military’s rescue efforts after a mine explosion triggered an earthquake.

Speaking of that earthquake, the final moments of the episode took us back down into the mines, where we caught a glimpse of what was really responsible for those tremors. But all Helbing will say of that giant hand is this: “I’m assuming a lot of people will know what that is. In Episode 2, you’ll see a little bit more. And in Episode 3, you’ll find out exactly what it is.” (Doomsday, perhaps?)

* Lois walked in on Jonathan and his girlfriend Candice getting down to business, prompting Clark to deliver what could have been a very awkward sex talk. Kudos to Clark for managing to avoid being too cringey, instead just laying it all out there like a mature adult. That said, you may be wondering why Jonathan is suddenly dating a girl named Candice. When last we saw him, Jonathan was cozying up to Tegan, whose father was imprisoned in Central City. Spoiler alert: You can kiss that potential storyline goodbye. “You know how teenagers are,” Helbing says. “You date someone for a month and then it’s over. In those three months, he and Tegan broke up and he started dating Candice.”

* In other relationship news, Sarah returned from summer camp this week, but it wasn’t the happy homecoming Jordan was expecting. She didn’t love that he showed up at her house without texting first (awkward), and even though they shared a kiss at the site of their infamous arrest (aww!), it wasn’t exactly a passionate lip lock. Kyle later reminded his daughter that she’s the alpha in her relationship and that she needs to be honest with Jordan about… however she’s really feeling.

* The season premiere was directed by Arrowverse staple David Ramsey, but he won’t stay behind the camera for long. Helbing confirms that we “will see him again” as John Diggle in the near future.

Did Superman & Lois have a strong return? Grade the premiere below, then drop a comment with your thoughts — including your theories about WTF is in that mine.