After kicking off a timely and topical season 22 in November, Law & Order: Special Victims Unit returns from a brief winter hiatus for a run of all-new episodes in January. Showrunner and executive producer Warren Leight opens up to ET about what’s to come as the NBC crime procedural starring Mariska Hargitay as Captain Olivia Benson continues to tackle real-world issues and contends with major changes to the Law & Order universe, including Christopher Meloni’s return as Elliot Stabler.

“Like everyone in New York, our characters have gone through a series of crucibles in the last nine months: the horrible losses of spring, the George Floyd uprising of summer, the isolation and depression and stress that permeated the entire year,” Leight previously said of COVID-19 and the Black Live Matters movement, which were “reflected in what our characters go through” in the first batch of new episodes.

Additionally, the series is also building up to Benson’s anticipated reunion with Stabler, her former longtime partner, before he leads the new spinoff Organized Crime. There’s also the welcomed return of so many familiar faces, including Raul Esparza as former Assistant District Attorney Rafael Barba in episode 4, “Sightless in a Savage Land,” followed by John Waters as pornmonger in episode 5, “Turn Me on Take Me Private,” as well as Elizabeth Marvel as defense attorney Rita Calhoun and Wentworth Milleras ADA Isaiah Holmes in episode 6, “The Long Arm of the Witness.” 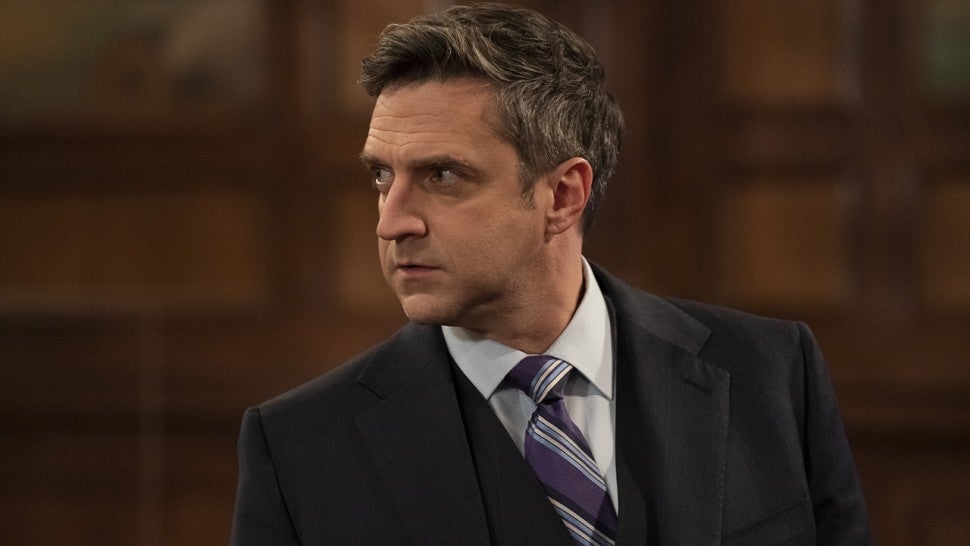 “Like so many other people, all over the world, we have had to change everything about the way we work, and yet we value more than ever the camaraderie and joy of being back at work,” Leight said of the team’s resilience, adding that “New York, and our crew, have come through a long, difficult period. We know a lot of eyes are on us to see if we can continue to work safely in a world still dominated by a pandemic. I have never seen cast, crew, writers on any show working with this kind of unity and purpose.”

Ahead of SVU’s continued, star-filled return on Thursday, Leight reflects on the season’s success so far as well as the Benson-Stabler reunion, which was recently teased on social media, and why the series is welcoming back so many familiar faces.

ET: How do you feel about the season so far and what you’ve been able to achieve, especially the COVID-19 restrictions and coming back after such a long delay?

Warren Leight: Two men leap off the roof of an 80-story building. Forty flights down, one turns to the other and says, “so far, not so bad.”

Actually, I’ve been amazed that the cast, crew, writers’ room, and post team have all had to completely change the way we work, and yet the episodes have somehow been among our best. I think we’re lucky to have an experienced team that’s been working on the show for as long as we all have. Every time a brick comes through the window (which on some days happens every 10 minutes), the nearest person grabs a broom, sweeps up the glass, someone else replaces the pane, and we just keep going. We were shut down for six months, and no one wants to be the one who drops the ball and weakens an episode, or worse, causes us to have to shut down again.

When it comes to episode 4, “Sightless in a Savage Land,” how did you get Raul Esparza to return? And how will his new role as defense attorney shake things up for the squad and Carisi in particular?

We brought Raul back for a cameo last season. And since then, I’d thought about bringing him back for something more substantial. A few months ago, executive producer Julie Martin and I were walking to the stages for our COVID test and we ran into Raul on 23rd Street. We asked if he’d be interested in coming back and when he might be available. “Yes” and “sooner rather than later” were the answers. We knew any return would have to feature a bittersweet reunion with Benson, and a courtroom battle with his mentee, Carisi.

As for timing, we knew if we had Barba for the defense, we’d have a great winter premiere. And Barba’s return means Carisi has to go up against the lawyer who in many ways shaped his decision to become an ADA. It’s a morally complicated case, and an emotionally complicated challenge for Carisi. It’s pretty clear how much pressure Carisi puts upon himself as their day in court approaches.

The other big guest star we’re excited to see come back is Wentworth Miller in episode 6, “The Long Arm of the Witness.” Why did you want to bring back his character, Isaiah Holmes?

Wentworth’s Isaiah Holmes was introduced too briefly last year, but Wentworth and I spent a good amount of time discussing Isaiah’s journey.  He’s a character with multiple layers — a man of integrity and intelligence, burdened with guilt, shame, and in his mind, a lot to atone for. Early in his life, his “otherness” left him unsure and passive, now his identity as a queer POC empowers him. As Wentworth told me, Isaiah Holmes now “knows who he is/what he stands for, and is fearless in advocating for those who cannot advocate for themselves.”

Does Wentworth’s return mean we can possibly see more of him down the road? Or is this meant to be a one-time appearance this season?

Working with Wentworth on finding Isaiah has been a privilege, and I hope Holmes will return and continue to evolve.

Wentworth’s return overlaps Elizabeth Marvel’s as Rita Calhoun. And they follow Tamara Tunie and Raul’s appearances this season. Why did you want to bring so many familiar faces this season?

Like many people, my social life irised down to a very few this pandemic year. I wonder if subconsciously, I thought, if I write for them, I’ll at least get to see some old and new friends on Zoom meetings. Also, from a practical point of view, in a year in which the logistically daunting COVID protocols hang heavily over every moment of pre-production and production, it’s just a lot easier to write for actors and characters we know. Finally, from a story point of view, every time we bring someone back, their history with our regulars thickens the stew.

Given the anticipated launch of Organized Crime and the potential for crossovers, are you and Dick Wolf looking at any of these characters as people who can float between both series?

I’ll defer to Dick and OC showrunner, the gifted Ilene Chaiken, on questions about OC’s casting.

Meanwhile, everyone was excited about the photos you and Mariska posted to social of the Zoom table read as well as photos of Chris getting back into character as Stabler. What was it like seeing Chris reunite with everyone during the read?

We have been Zooming our cast read throughs all season. This one was different. In some ways it had the feel of an opening night on Broadway: lots of anticipation, excitement, even nervousness. We had many well-wishers from the network, studio, and Wolf Entertainment join us. The moment Benson and Stabler had their first scene, everything fell into place. I just wish we could have all gone to an opening party when it was over.

As we move further into the season, are there any other themes or real-world issues that you’re looking at when it comes to stories we can look forward to in 2021?

We will continue to explore race, class, and justice throughout the season. The politics of policing in a post-George Floyd world; the pressure for change, and the justice system’s response to that pressure will be fodder all the way to our finale. Our characters will see this moment through the prism of their experience. Deputy Chief Garland will embrace it as a long-needed inflection point; Kat will be frustrated by the slow pace of change; Fin will wonder if the tide is really changing, or if it’s just another dream deferred; and Benson, with a lawsuit hovering over her, will struggle to understand her own biases and how they have affected her work at SVU.

DM COMMENT: Keir Starmer in No. 10 will be the only result of Tory war

Rhonda Burchmore: ‘If I spoke up, I would’ve been on the first plane home’