A decade after first getting together, the pair finally got married, at the 15th-century St Tyrnog parish church near Denbigh, Bryn’s North Wales home town. 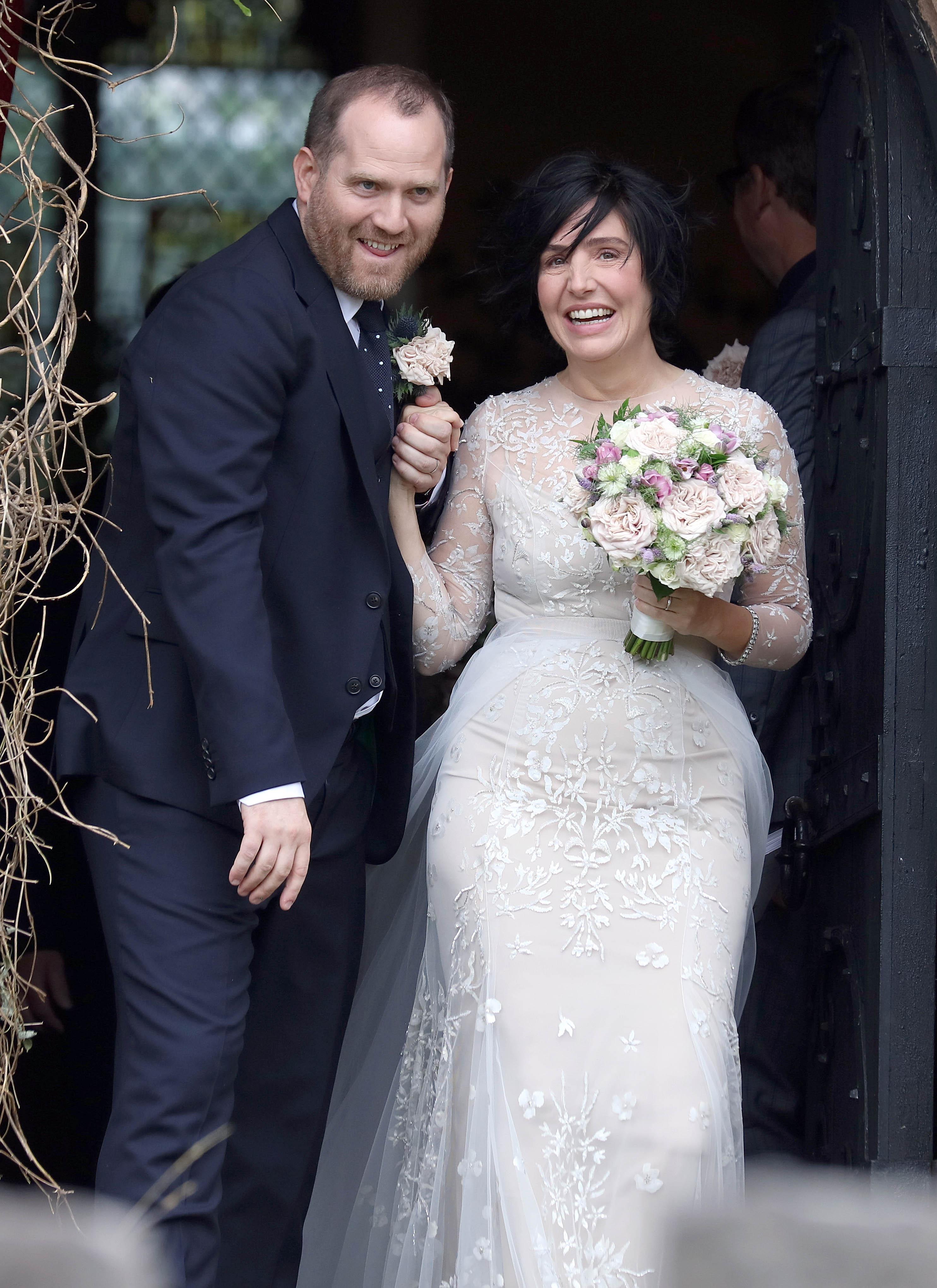 Stella and her photographer sister Mary were among the celeb guests, alongside new Virgin Radio Breakfast host Chris Evans.

After the ceremony the newlyweds hosted around 500 guests at the reception in a marquee at Bryn’s home. Chris loaned the couple his Aston Martin DB9 to drive there.

A source said: “It was the most beautiful day and even the grey skies and torrential rain didn’t put a dampener on things — everyone had a ball. 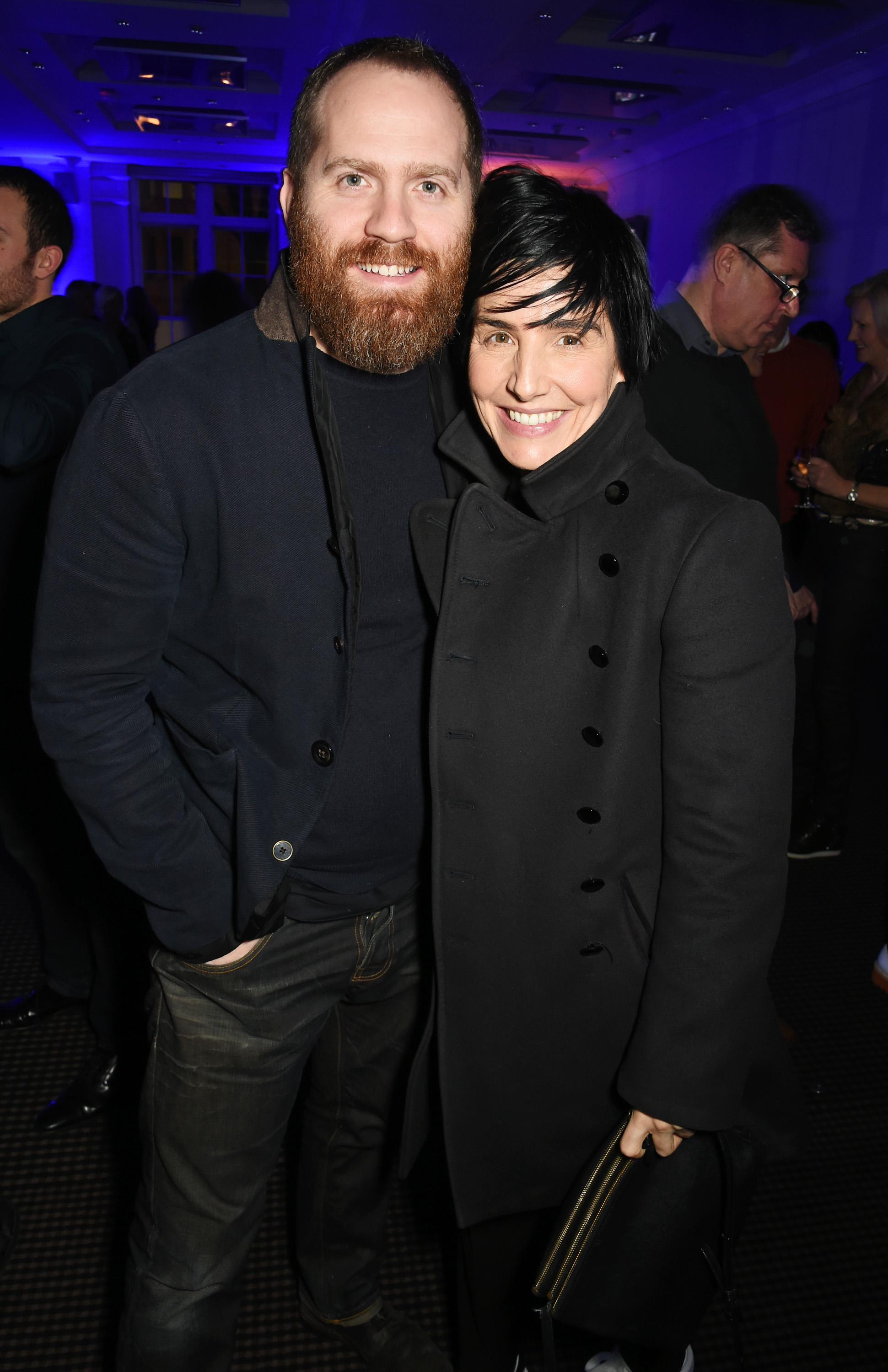 “The couple were beaming and Sharleen looked absolutely stunning.

“Their reception marquee was enormous and some of the locals were joking that it was the size of a football pitch.”

The Rev Val Rowlands, who married the couple, told us afterwards: “It was a truly lovely wedding service. I was told there were a few celebrities in the church but to be honest I just kept my eyes and mind on Sharleen and Bryn.”

The 50-year-old Scots singer used to date magazine editor Ashley Heath, who is father of her 15-year-old daughter Misty Kyd, but they split in 2005. She met Bryn two years later at his restaurant Odette’s in Primrose Hill, North London.

Sharleen previously confessed to taking a minimal role in organising her wedding, because her pals were doing it all.

She said: “I’m doing absolutely nothing. It’s great getting married at this age because all your mates say, ‘I’ll do this and I’ll do that’. I kind of don’t have any say whatsoever.”

Let’s hope she got to decide if there were any Texas songs on the wedding playlist.

READ ON FOR MORE OF THE BIZ ON SUNDAY COLUMN 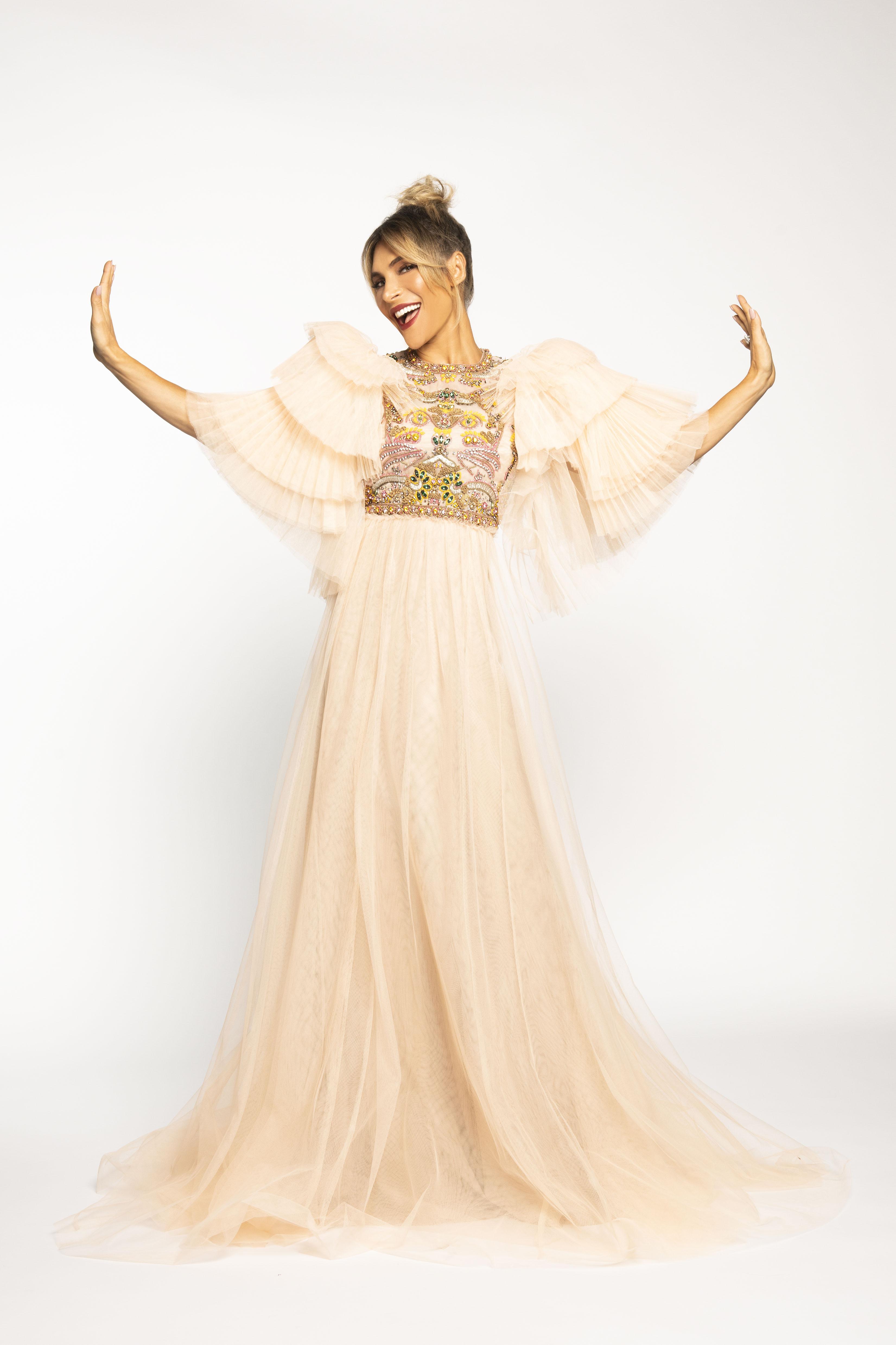 AYDA Field’s posh Gucci frock is perfect for a party – and the X Factor judge has lots to celebrate.

This week she and Robbie Williams welcomed daughter Colette Josephine, via a surrogate.

In an exclusive interview, Evan told us: “I don’t think she really watches any reality TV but the way we shot everything was documentary style. But my mum is great at everything she does.”

IT was designer handbags at dawn when feuding rappers Nicki Minaj and Cardi B got physical at a party.

The pair, who publicly fell out last year, nearly came to blows on Friday night at the Harper’s Bazaar Icons fashion party in New York. 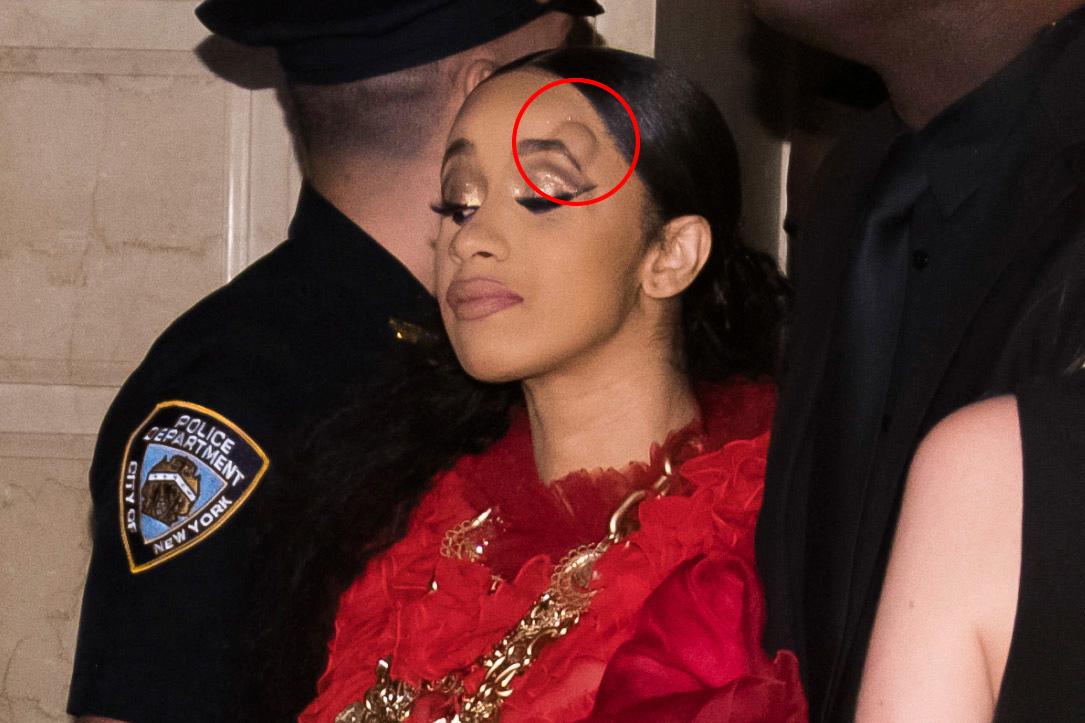 Police were called to the incident – as fierce as Nicki’s animal-print dress – and Cardi was escorted out of the bash by security after she took off her shoe and threw it at Nicki’s head.

New mum Cardi, who gave birth to daughter Kulture Kiari Cephus in July, was snapped leaving the bash with a giant bump above her left eye, thought to be as a result of security staff accidentally elbowing her in the head. 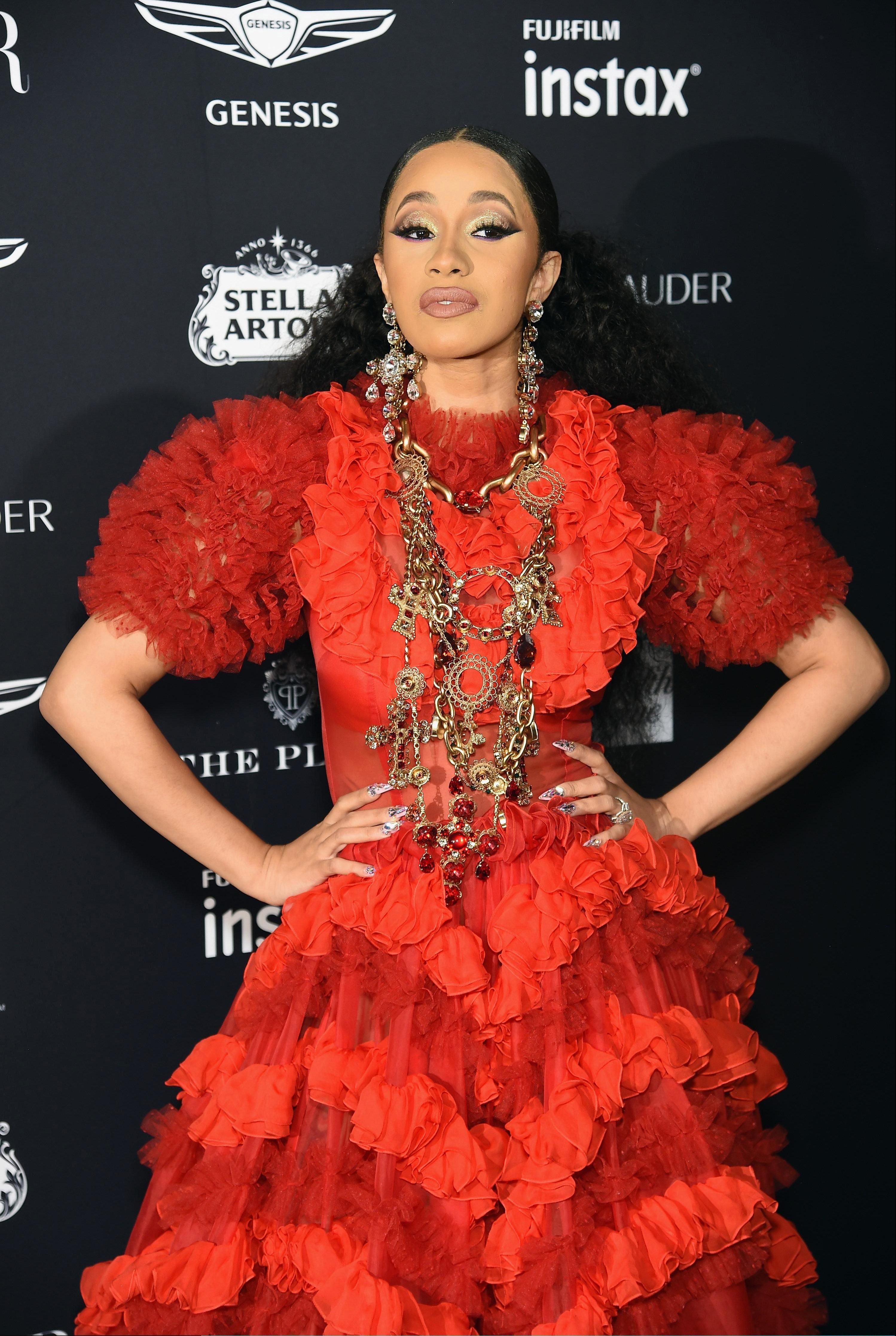 Security then rushed to block her as she appeared to lunge at Nicki before launching the shoe at her. 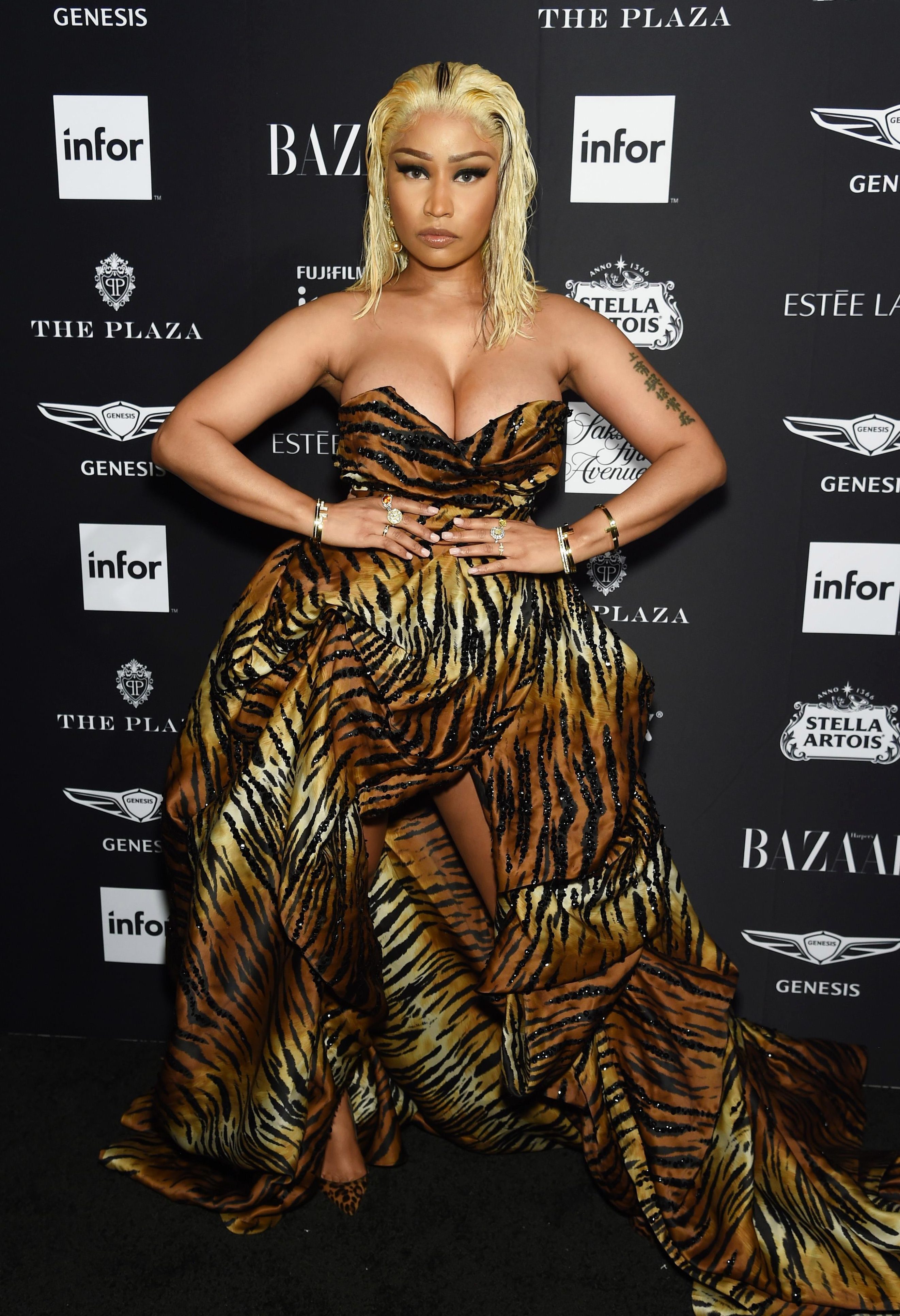 Later Cardi told Nicki on Instagram: “I’ve let a lot of s**t slide! I let you sneak diss me, I let you lie on me, I let you attempt to stop my bags, f*** up the way I eat!”
Unfortunately it was also bad news for Cardi’s fancy frock, which ripped down the back, exposing her shapely rear.
Sounds like a bum night all round.

Tale of the tape

ROXANNE Pallett clearly hasn’t made many (if any) friends in the showbiz industry.

But at least she managed to grow very close to one celebrity following her stint on a Total Wipeout special in 2011. 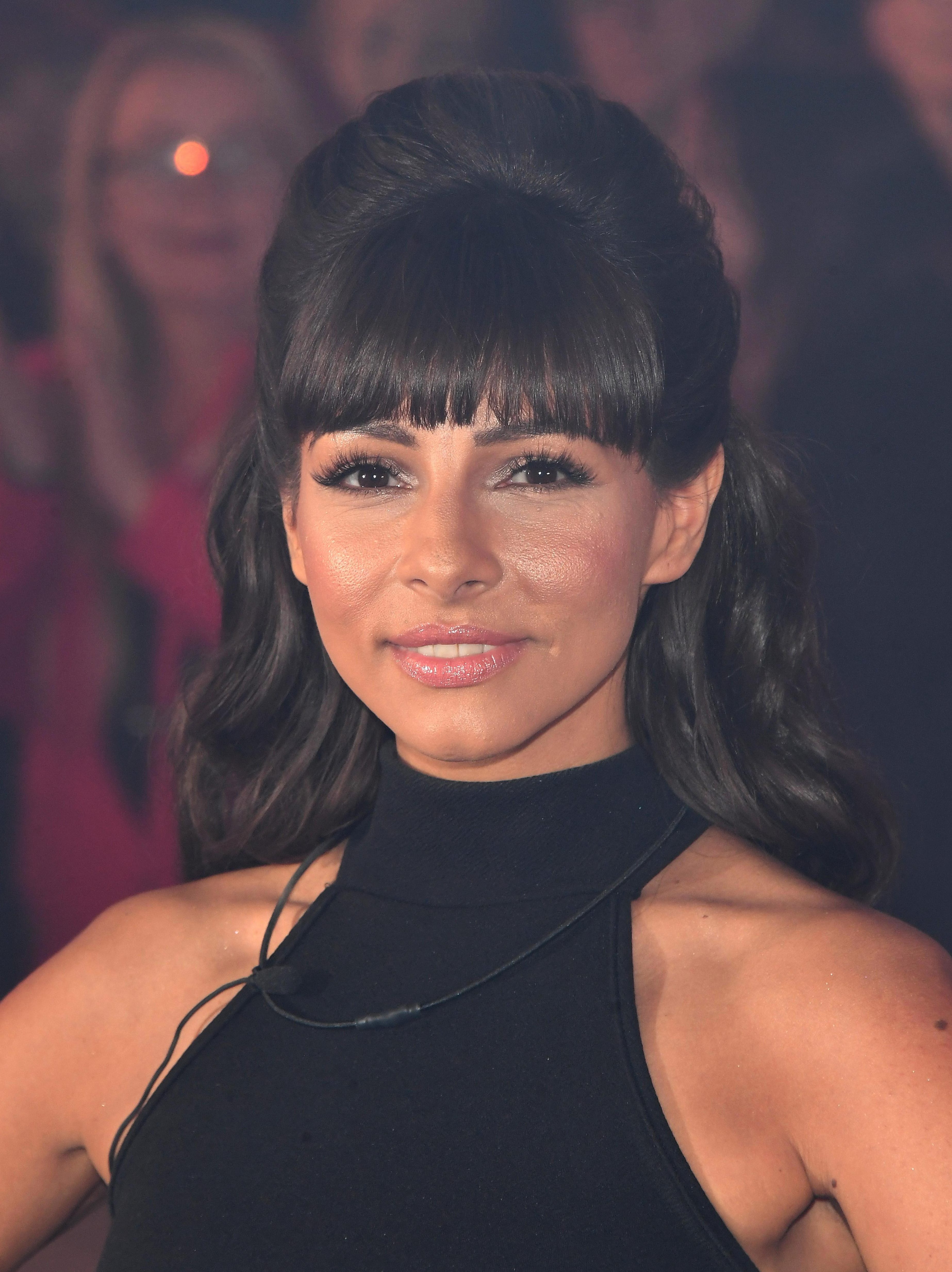 We can reveal that the former Emmerdale star and disgraced Celebrity Big Brother contestant formed a strong bond with Noughties rapper Lady Sovereign when they flew to Argentina in 2011 to appear in celebrity versions of the BBC game show.

In fact Lady Sov, who was once championed by JAY Z and also had a stint in CBB in 2010, even briefly stayed with Roxanne and her mum Monica when they returned to the UK.

A source said: “They quickly became friends during the Total Wipeout filming and spent a lot of time together.

“They’d formed such a bond working together that Roxanne kindly offered for Lady Sov to stay with her at her family home. 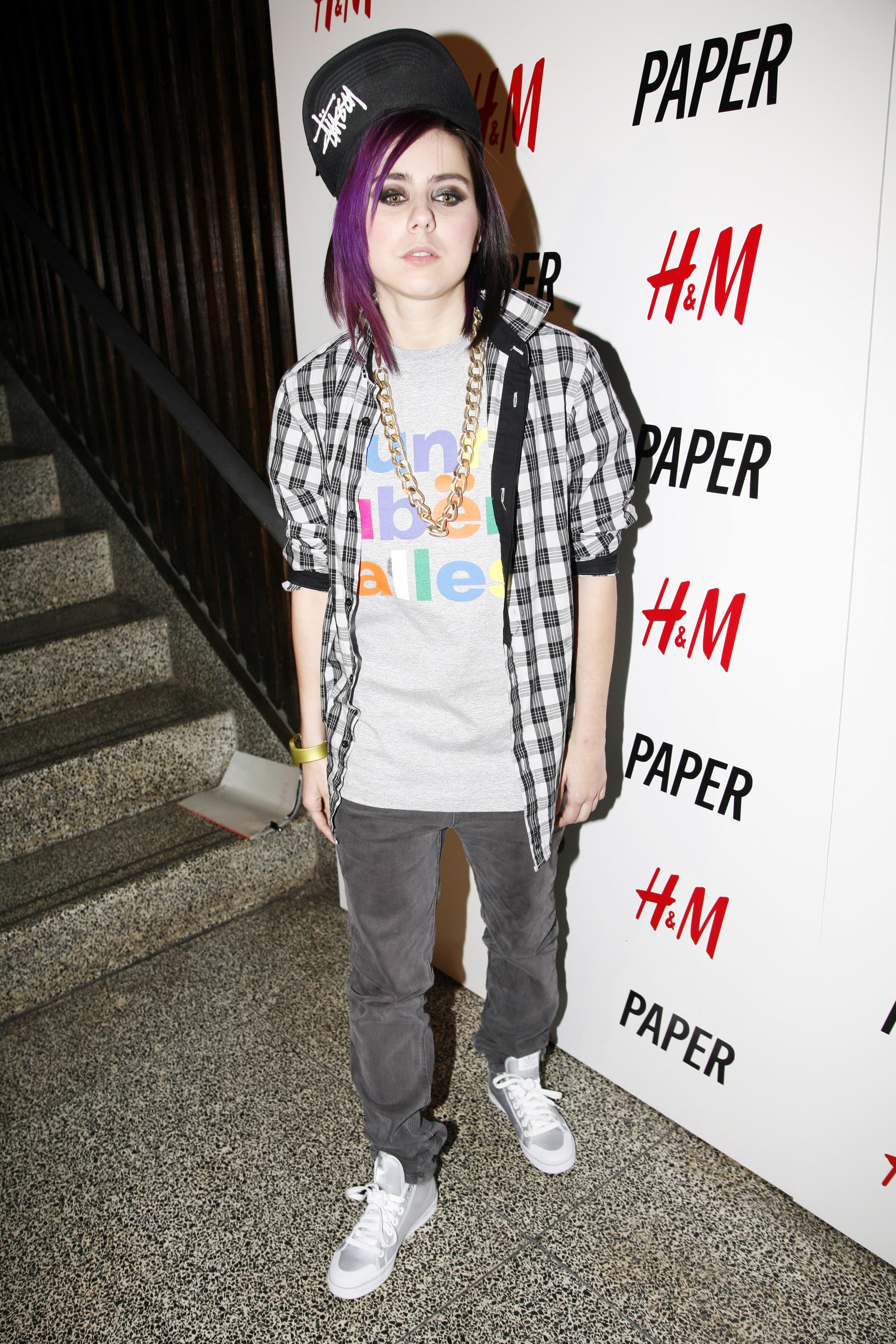 “Sadly they then had a falling out and all contact was cut.”

After Roxanne’s disgraceful behaviour towards ex-Corrie star Ryan Thomas inside the CBB house, many of her former co-stars have come forward to share their own negative experiences with her.

And it appears Lady Sovereign has joined the long list of those who harbour bad feelings for Roxanne.

Shortly after footage showing the actress falsely accusing Ryan of hitting her like a punch bag was shown on screens, she tweeted: “Naaaahh Roxanne your disgusting #cbb”.

A spokesperson for Roxanne said: “She met Lady Sovereign during Total Wipeout. They were friends afterwards for a very short time.”

BEYONCE and hubby Jay Z prove there’s nothing like putting a marriage back on track by sealing it with a kiss (and a loved-up snap on Instagram to 117m followers).

The couple looked pretty in pink while celebrating Bey’s 37th birthday in Sardinia. 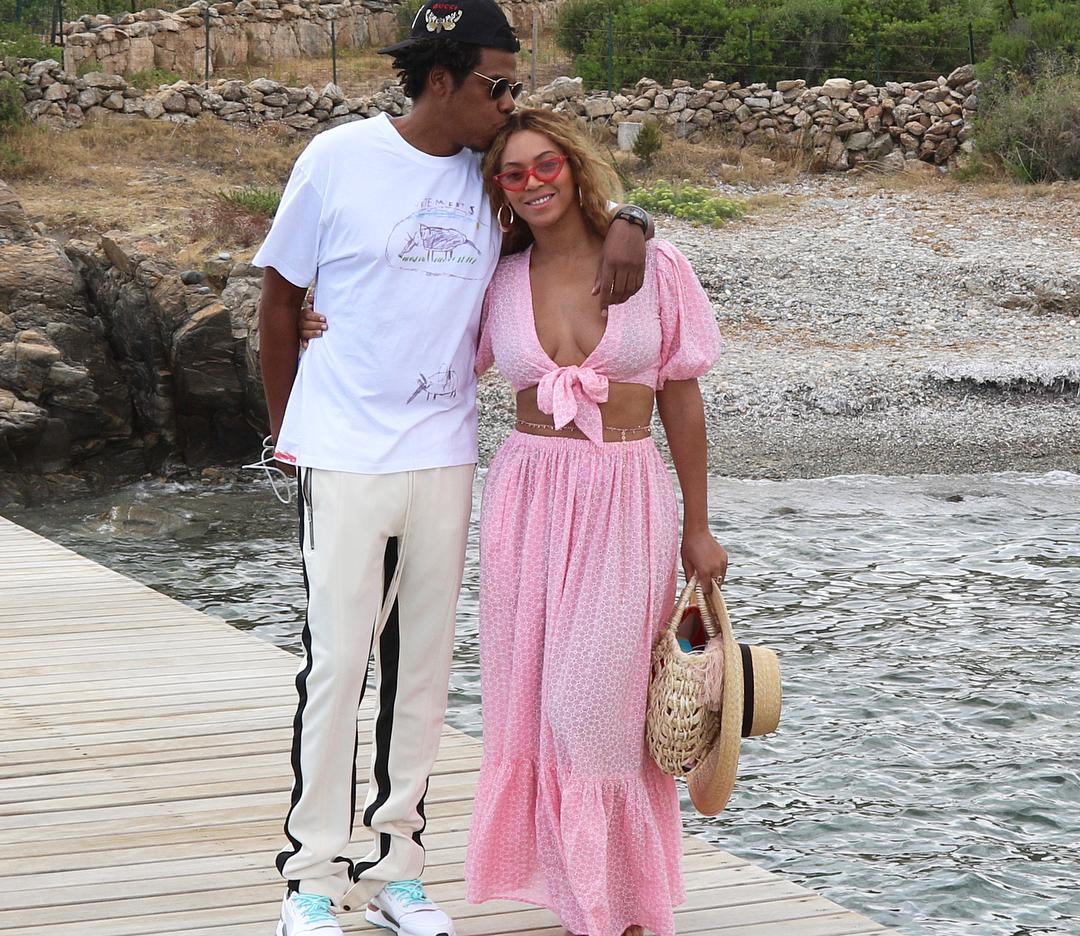 Fortunately, she is a pop star who also likes to give a birthday gift to her fans, so she uploaded a staggering 169 outfit pictures on her website taken over the past year.

THE last time Justin Bieber attended New York Fashion Week three years ago he was a fresh-faced youngster with floppy hair, not daring to stray away from muted tones.

How times have changed. Now the engaged singer is determined to transform his look into the love child of Ron Burgundy and Wayne’s World Garth with all the wardrobe flamboyance of Elton John. 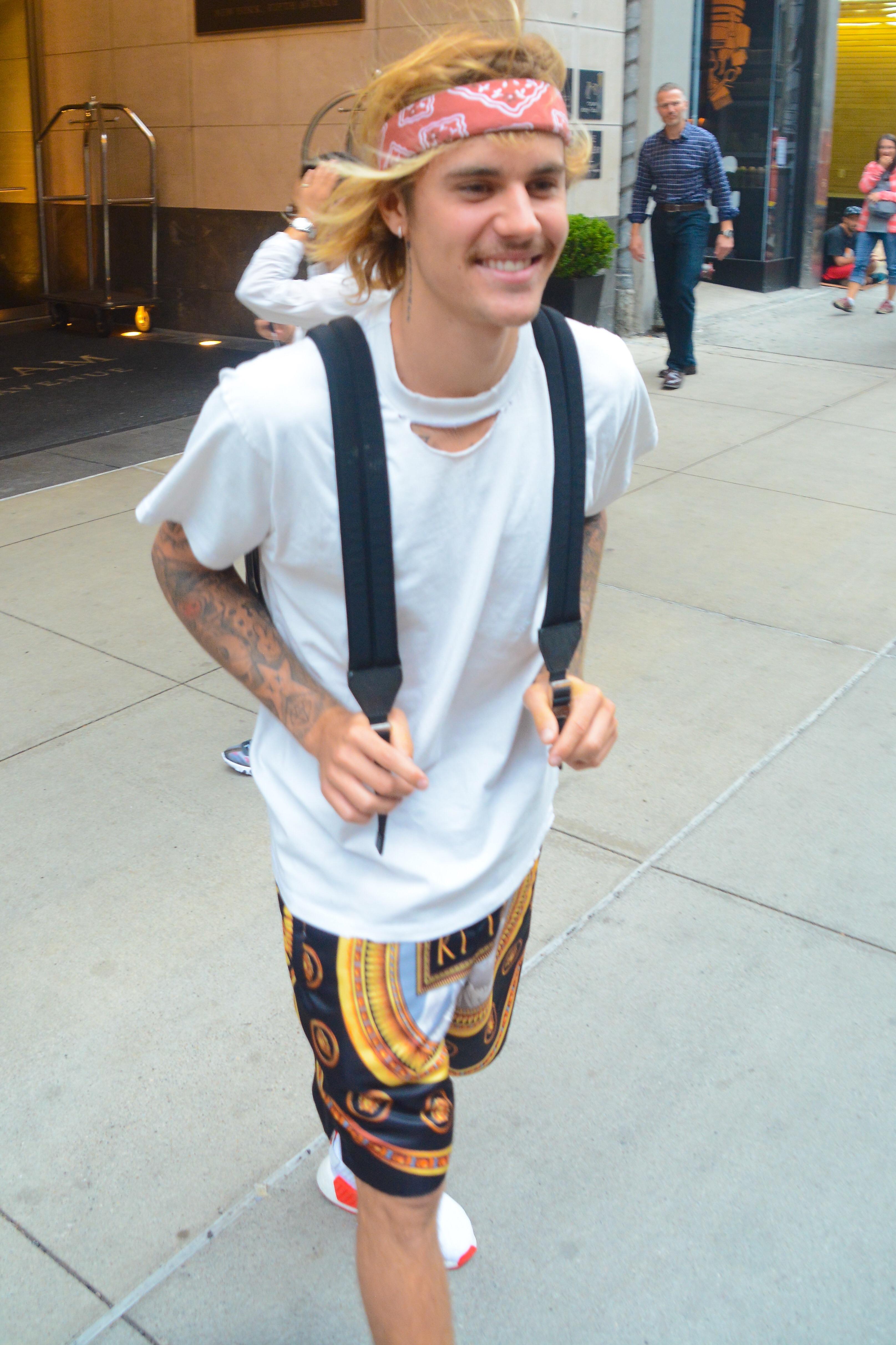 Bieber rocked a printed bandana around his head in the Big Apple and we’ve spared you the sight of his printed Versace shorts.

Never mind, no doubt, fiancée Hayley Baldwin would agree that he’s truly a style icon for the 21st century. 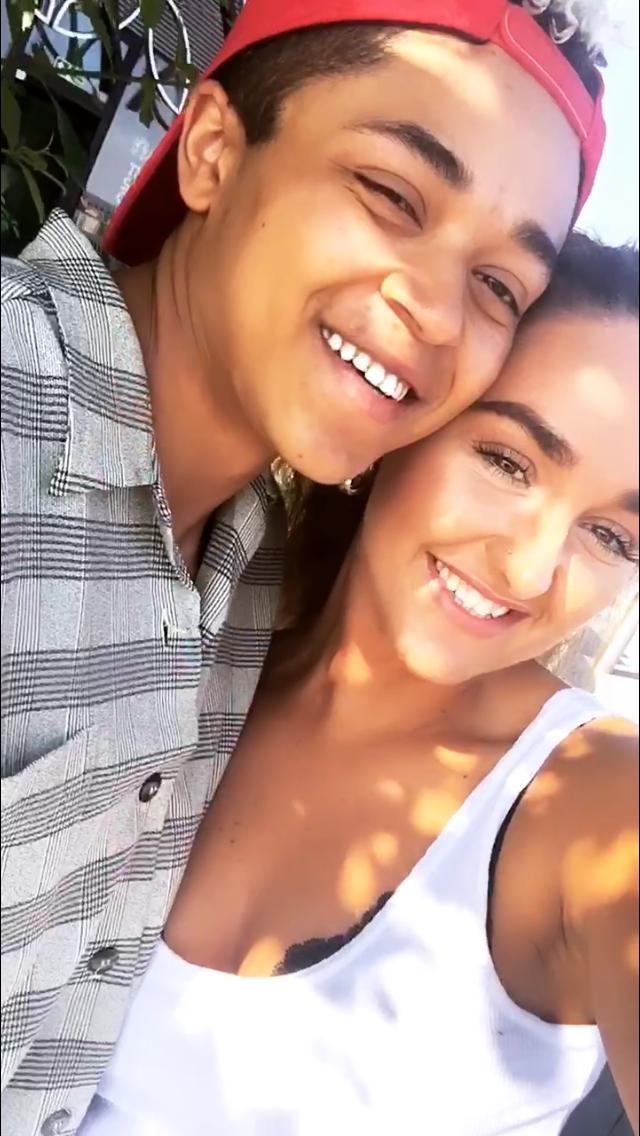 And now we can confirm that he caught more than just the judges’ eyes with his amazing performance of Kodaline’s All I Want – also impressing new girlfriend Bobbie Harvey, inset together, backstage.

Felix said: “She came down last Friday and we made things official. I still can’t believe I auditioned for X Factor, got four ‘Yeses’ and found a girlfriend.”

That's a bit Richie of Becks'

A source said: “David wouldn’t miss Guy’s birthday. Usually it’s only him but this year Victoria decided to come too.”

The couple came in for ridicule this week after their lacklustre comments to Vogue about their marriage, but are now giving their best display of unity.

We hear David will be by Victoria’s side when she presents her spring/summer 2019 collection at London Fashion Week next Sunday.

And we’re sure that when they face the cameras, Brand Beckham will be as trendy (and moody) an affair as ever.