Mark, 54, was on hand to try and defeat today’s hopeful The Chase contestants, all hoping to get their hands on a jackpot prize. Host Bradley Walsh, 59, oversaw proceedings, welcoming each player to the podium at a time. However, it was the third player Liam who seemed to irk The Beast as the school teacher saw himself as quite the joker and was scolded by the ITV quiz star for his cheeky quips.

Following one player getting through to the Final Chase and one packing their bags, it was Liam’s time to face Mark and get his hands on some cash.

After his cash-builder round, the school teacher was going into the head-to-head with £2,000 in the bank, but The Beast had a few offers up his hand.

Giving the contestant the chance to stay with his sum, the Chaser also offered a lower amount of just £2, with a higher offer of £40,000.

Taking his original accumulation, the cheeky chappy gave the next round his best shot, but was scolded by the quizzing master for not “concentrating”. 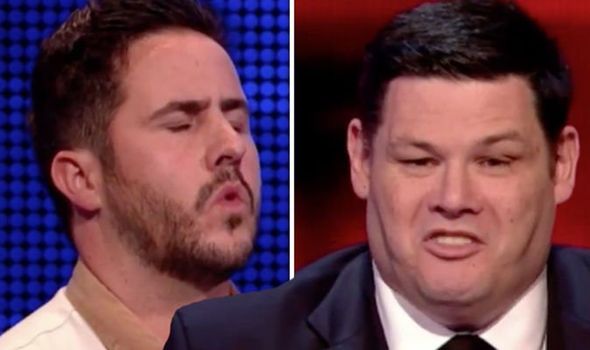 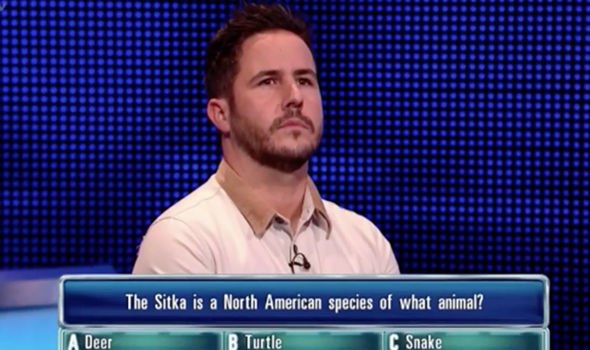 One of the first questions Bradley asked Liam and Mark was: “The Sitka is a North American species of what animal?”

The options the pair had to give as their answer was A) Deer, B) Turtle or C) Snake, to which the player chose the latter.

Explaining his decision, the contestant joked: “There’s something slimy about this character so why not,” in reference to The Beast.

Unfortunately, his decision was the wrong one as his opponent got the answer correct and he didn’t. 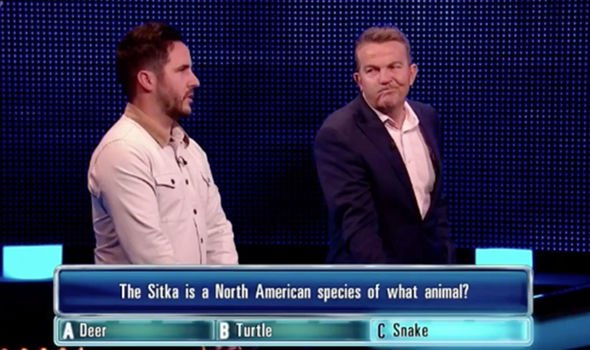 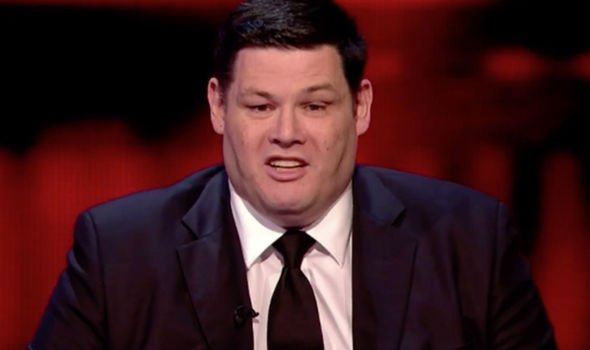 I suggest you concentrate

It seemed the quizmaster had ignored the school teacher’s quip about him at first as he replied: “I can picture a small kind of deer.”

However, he hadn’t completely blindsided the joke as he scolded Liam by telling him: “I suggest in the next two minutes you concentrate on your answers more than your punchlines.”

Fortunately for the teacher, he managed to get his head back in the game and got through to the Final Chase with fellow player Carl.

Mark didn’t let the remark about him go, as after the final player was knocked out, he passed comment on the finalists.

“They could mesh together beautifully, or I can see Liam getting in Carl’s way,” The Beast said as he geared himself up for the final round.

Going into the Final Chase, the two remaining contestants had a jackpot of £8,000 between, meaning they would each take a share of £4,000 home if they won.

They fought valiantly, but in the end, Mark’s quizzing knowledge just seemed too much to handle as they were beaten.

Taking to Twitter, viewers commented on the result as the two men left the show empty-handed.

In reference to the scolding Mark gave the school teacher, one commented on the social media platform: “Caught with 30 seconds left. The Beast taught Liam a lesson #TheChase.”

Another added: “The Beast was on fire as usual. Until tomorrow, #TheChase.”

A third remarked: “The Beast gave Liam a right proper spanking! #TheChase,” whilst a fourth wrote: “The Beast is playing with them. #thechase.”

Will anyone be able to defeat Mark if he takes to the hot seat once again?

Windows 10 May 2020 Update launch is finally here: download it here

Bond movie quotes quiz: Can you name the James Bond film from these famous lines?

Love it or loathe it, Windows 10 is a massive success for Microsoft