Home » 'The Falcon and the Winter Soldier': No, Building a Failsafe Into Bucky's Metal Arm Wasn't a Bad Idea

After episode four, fans are debating the ethics of an unknown failsafe built into Bucky’s metal arm 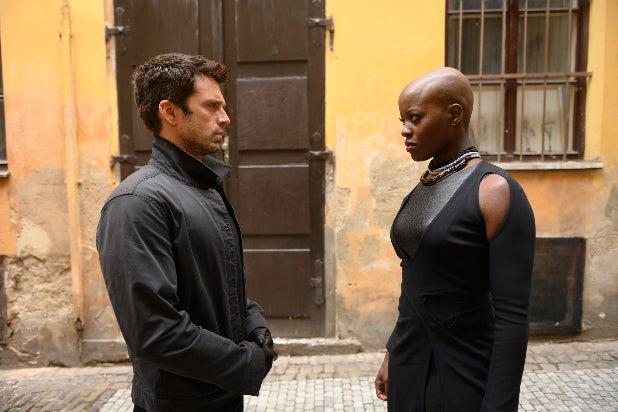 Marvel fans (and Bucky Barnes himself) got a surprise in the most recent episode of “The Falcon and the Winter Soldier” when it was revealed that Bucky’s (Sebastian Stan) new vibranium arm has a built-in failsafe that he had no idea about. But based on the reaction to it, we think some people probably need to rewatch previous episodes of this series, if not also at least 4 MCU movies.

So Episode 4, “The Whole World Is Watching,” begins with a flashback to sometime between “Civil War” and “Avengers: Infinity War,” during the period when Bucky was hiding out in Wakanda. Bucky has recently been cured (presumably by Shuri) of his Hydra programming, but that cure has to be tested, a potentially dangerous job that fell to Dora Milaje officer Ayo (Florence Kasumba). Of course, we know the cure worked. But in addition to giving Sebastian Stan the chance for an extremely moving performance, the scene mainly establishes the extent to which Bucky owes Wakanda for his new life, and the specific personal connection he has with Ayo.

Jump back to the present day, where Ayo is not pleased to find out Bucky is willingly working with Zemo (who, if you’ll recall, murdered King T’Chaka); but based on the trust that they’d earned with each other, she gives him eight hours to finish his mission. However, she warns him that when the time is up, she and her warriors are coming for Zemo no matter what.

That of course ended up happening, and thanks to some rather idiotic and highly toxic behavior by the new, extremely hateable Captain America, the encounter turned into a big fight, with New Cap and his sidekick Battlestar getting their asses kicked with hilarious ease by the Dora Milaje, while Bucky and Sam Wilson (Anthony Mackie) attempted, unsuccessfully to diffuse the situation. And during the melee, Bucky came face to face with Ayo, who stunned him by activating a failsafe that caused his new metal arm to fall off his body.

That led actor Steven Ford to contend that the failsafe was somehow a kind of betrayal by Wakanda against Bucky, which in turn kicked off a pretty intense debate over the subject.

Look — we’ve got sympathy for the Winter Soldier. We really do. And part of the fun of this show has been watching Bucky finally start to deal with the fallout from his past as he makes amends with the red in his ledger. But we really can’t believe it’s even a question whether or not the failsafe was a good idea.

First, and probably most importantly, Bucky is a trained assassin and killer who spent almost a century as a brainwashed, nigh-unstoppable murder cyborg amnesiac. And as we saw in “Civil War,” even after he started regaining his memories and personality, Zemo was able to undo all of it by reciting a few Hydra code words. Giving him a new metal arm was a calculated risk, one we’re guessing Wakanda deemed worth it because of the threat posed by Thanos. Sure, he’s doing a lot better now, but the fact remains that for a long time Bucky was an unstable liability, and even he doesn’t seem to fully trust himself.

Second, speaking of Wakanda, that’s where Bucky lived for several years thanks to the kindness of T’Challa. Wakanda is a country that survived millennia without ever being conquered or colonized, in part by keeping its vast technological and mineral advantages a secret from outsiders. And Bucky’s arm utilizes both. Even if he wasn’t someone who could pose a potential risk, it beggars belief that they would simply let him walk around with what has to be more than a billion dollars worth of advanced weaponry without making sure to attach at least a few strings.

As one person put it, would Ultron still have happened if Tony had taken the appropriate precautions and built a failsafe when he created him, rather than being blinded by his own desires?

And third, this whole thing is also a thematic callback to Sam Wilson’s own situation. Remember a couple of episodes back, when New Cap reminded Sam that the Falcon suit is still U.S. government property?

But to get back to the original question: Did Wakanda show Bucky a lack of trust or undermine him?

Consider this: Wakanda gave Bucky a home, rescued him from the slavery he lived under for almost a century, helped him hide from international authorities, and gave him cutting edge technology, all apparently free of charge. As far as we can tell, Wakanda doesn’t owe Bucky anything.  He however owes it everything.

We have a… difficult time agreeing with the idea that by choosing to be prudent, and make sure nothing they gave him could be used against them, instead of being gullible suckers, Wakanda’s somehow betrayed Bucky. Plus, if “The Falcon and the Winter Soldier” is showing us anything, it’s that while Bucky might not be a coldblooded killer anymore, he’s far from healed. Even he doesn’t fully trust himself.

But more importantly, for people who feel the need to stand up for Bucky, it might be useful to keep watching the latest episode of “The Falcon and Winter Soldier” after his arm is deactivated. Ayo lets him keep it and leaves without actually harming him. And his reaction? Mainly surprise, with a splash of “I’m going to keep this in mind next time.”

Basically, it feels pretty clear that he has no hard feelings about it at all. Probably no one else should either.

Primark's new swimwear collection is amazing – and starts at just £4