Completing the thematic trilogy that Denys Arcand began in 1986 with “The Decline of the American Empire,” and continued in 2002 with the Oscar-winning “The Barbarian Invasion,” “The Fall of the American Empire” is another of the Quebecois auteur’s playful and damning philosophical excoriations of societal values. Less of a sequel than it is a spiritual successor — there are no returning characters, and Arcand newcomers won’t have any trouble following the action — this thoroughly modern financial caper finds that America’s corruptive influence is still creeping up North, infecting its closest neighbor like a gangrenous rot that needs to be cut off at the knees.

What else is new? But if Arcand’s worldview hasn’t changed, his angle continues to grow more acute. Where “The Decline of the American Empire” focused on social ills, and “The Barbarian Invasions” was preoccupied with ideology, “The Fall of the American Empire” finds the 77-year-old Canadian legend turning his attention to the greatest moral catastrophe of our time: money.

The overburdened story begins with a breakup scene that unfolds like a dopey, knowing riff on the opening five minutes of “The Social Network.” Over-educated French-Canadian courier Pierre-Paul Daoust (a clenched and fumbling Jesse Eisenberg type played by Alexandre Landry) sits across from his bank teller girlfriend (Florence Longpré) at a Montreal diner and explains that he’s too smart to be successful — that intelligence is a handicap, and ethics might be as well.

He cites Donald Trump as the perfect example: “Imbeciles worship cretins.” And then, quoting Wittgenstein, Pierre-Paul clumsily rationalizes that what’s stopping him from moving up in the world is his understanding that other people would have to suffer for his success. A generous sort who volunteers at a soup kitchen, always gives to the homeless, and believes in the power of divine providence, Pierre-Paul paints himself as some kind of saint in crisis. His girlfriend, who’s got a 12-year-old son to raise, doesn’t quite see things that way. And so they split.

A few hours later, however, our hapless hero finds himself parked outside of a botched robbery, where a few dead bodies have left him with a duffel bag stuffed with several million Canadian dollars. It’s a cheeky bit of kismet, but amor fati is always a reciprocated kind of love. When Pierre-Paul decides to take the money, the question becomes: Will he be able to spend it well, or will the sudden windfall confirm his suspicion that riches are antithetical to virtue?

From this simple premise — a philosophy 101 writing prompt that’s disguised by an unbalanced combination of sex, violence, and withering social commentary — Arcand weaves a breezy mosaic that often plays like a Paul Haggis remake of Robert Bresson’s “L’Argent.” Cash binds the ensemble cast together, as the clueless Pierre-Paul immediately tries to buy himself some help. “Money is a language that most people don’t understand,” he says, and so the first person he solicits is, for all intents and purposes, a translator. In reality, that translator is a haggard old crime boss named Sylvain “the Brain” Bigras (Rémy Girard, in a part that would surely be played by Tom Wilkinson in an English-language remake), who wants to go legit. 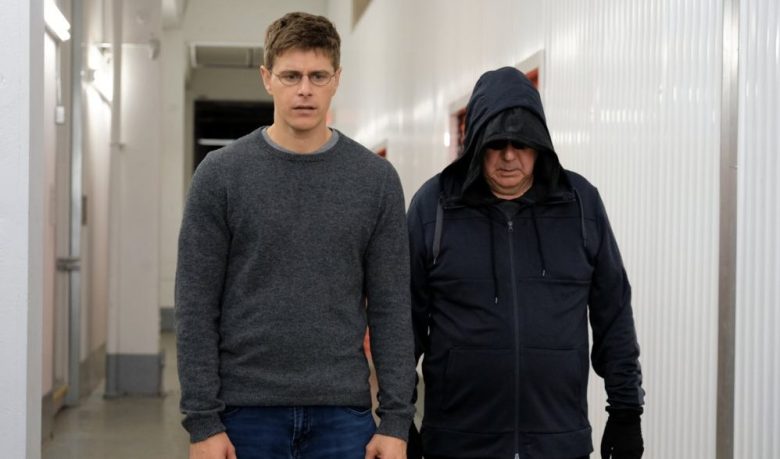 “The Fall of the American Empire”

Pierre-Paul’s next call is a bit less practical. He finds a high-class escort — the most expensive in all of Montreal — and can’t resist the fact that she quotes philosopher Jean Racine on her website. Enter: Camille Lafontaine, a hooker with a heart of gold, and another person whose relationship with Pierre-Paul is purely transactional in nature (at first, anyway). It’s a credit to hyper-watchable Quebecois TV presenter Maripier Morin that the character is able to survive all of her clichés, as the relatively inexperienced actor wrests a measure of nuance and hard-won rectitude from a script that reduces all of its women (even the ball-busting detective on Pierre-Paul’s case) to their sexual wiles.

Too uncynical and trusting to stop himself from telling all of his new friends about his fortune, Pierre-Paul inadvertently assembles a motley crew of criminal masterminds. Some, like Camille, don’t hurt anyone. Others, like Sylvain, vow not to do it again. And then there’s white-collar financial wizard Me Wilbrod Taschereau (Pierre Curzi), who knows everything there is to know about tax evasion and gaming the system.

All of these people got rich by running afoul of the law, but Arcand’s low-key charmer reflects their supposed misdeeds in order to expose the immorality of a system that encourages people to exploit each other. “You defend the indefensible,” one of the characters barks at a cop towards the end of the movie, long after we’ve recognized that all of these zany figures are mouthpieces for the man who wrote them. “It’s better than the alternative,” the cop replies, and there’s truth in that, as well. Arcand struggles to balance the movie’s socioeconomic raison d’être with the slow-motion robbery that the writer-director uses to make his treatise more palatable (the big climax involves a bunch of people sitting in a basement and trying to organize a wire transfer), but the film is always watchable, even for all of its sluggishness.

With one foot stuck in reality and the other in a socialist fairy tale where everyone is happy to share the wealth and solve each other’s problems, it’s inevitable that “The Fall of the American Empire” moves somewhat awkwardly — it’s not stylized enough to thrill as a heist movie, nor serious enough to hold together as a furious condemnation of capitalism — but the performances are so pleasant that it’s easy to forgive this romp for those compromises. At the very least, the film is balanced enough to walk the fine line between hopefulness and naïveté. A spoonful of sugar helps the medicine go down, and while Arcand doesn’t necessarily have a cure for what ails modern Canada, “The Fall of the American Empire” does a fine job of diagnosing it. Not least of all in the sobering coda, which restores the film’s local focus, and leaves viewers to connect the dots between the pervasiveness of American values and the fate of Montreal’s indigenous population.

“The Fall of the American Empire” premiered at the 2018 Toronto International Film Festival. Sony Pictures Classics will release it in the U.S. in early 2019.

12 missing after boat capsizes in Gulf of Mexico during storm