Note: This article contains spoilers for the season-five premiere of The Flash

The Flash sped back into our lives this week for the season-five premiere, once again diving into the past.

For once though, Barry Allen didn’t mess up the timeline. Instead, the first episode reintroduced elements of earlier seasons through the character of Nora West-Allen, Barry and Iris’ daughter from the future.

Like father, like daughter, this new hero also starts off as “selfish and really bad at being a speedster”, but XS is still rather endearing and her arrival helps the show balance the more serious elements of recent seasons with the fun of the early days. In this regard, the season-five premiere is a return to form for The Flash.

Literal throwbacks like an older Flash suit and Eobard Thawne’s phasing speech from season one also fly past at superhuman speed, but without Barry’s abilities, it can be hard to keep up with everything that’s going on.

That’s where we come in. Join us as we grab hold of every Easter egg from the season-five premiere with lightning reflexes and explain what they could mean for the future of the ArrowVerse as a whole. 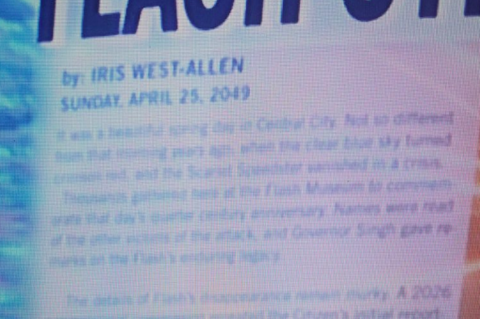 All the way back in the very first episode of The Flash, it was hinted that Barry Allen will die in a future adaptation of the comic book story Crisis on Infinite Earths, set in 2024.

Five years later, the show seems willing to finally confront this premonition head on, thanks to Nora, who has come back to try and prevent this from ever happening.

A new clipping reveals that 25 years later in the year 2049, The Flash is still missing. Funnily enough, Barry’s comic book counterpart appeared to be dead for almost the same length of time in the source material, only to return 23 years in Final Crisis.

What’s not so funny is that the byline of this future newspaper also reveals that Iris never remarried and kept Barry’s name, even after all those years. *sob* 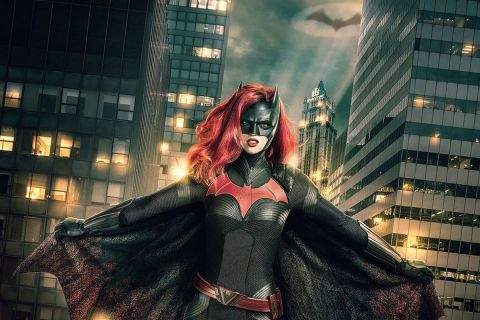 We just recently got our first-look at Ruby Rose as Batwoman – she’ll debut in the next ArrowVerse crossover, ‘Elseworlds’, but also appears to be involved in the future ‘Crisis’.

The aforementioned newspaper clipping reads: “In the years following the crisis, accounts only grew more contradictory. Some eyewitnesses remember dozens of other heroes present, including Green Arrow, Batwoman, and Elongated Man.

“Others remember heroes thought lost in time, like The Atom, or from other worlds, like Supergirl. Some even contend they saw Reverse Flash leading an army of ‘shadow demons.” 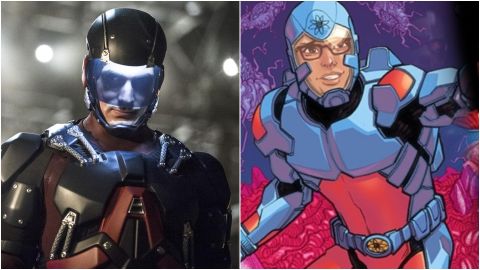 After she gives that iconic ring suit to her father, Nora runs her mouth off at super speed, name dropping another famous DC hero who could appear in the ArrowVerse somewhere later down the line. This one might be a bit harder to spot though…

In the comics, Ryan Choi follows in the teeny tiny steps of Ray Palmer to become the third Atom, using his shrinking abilities to fight for justice. It seems inevitable then that Choi will one day replace Palmer in the ArrowVerse shows too, hinting that Brandon Routh’s character might eventually leave or even die at some point on DC’s Legends of Tomorrow.

Wait, what was that about The Atom becoming “lost in time”? 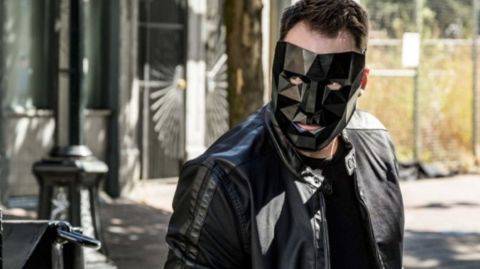 Villain-of-the-week Gridlock might have suffered a ghastly fate at the hands of new big bad Cicada, but there’s still a chance that actor Daniel Cudmore might return to the ArrowVerse again if his resume is anything to go by.

Although Cudmore is most famous for playing Colossus in Fox movies like X2 (2003) and X-Men: The Last Stand (2006), this week’s episode of The Flash marks his third appearance on these shows.

Before Gridlock, the Canadian stuntman also played a villain called Jackhammer in season 4 of Arrow, and he also did motion capture work for Gorilla Grodd in the DC’s Legends of Tomorrow episode ‘Welcome to the Jungle’. 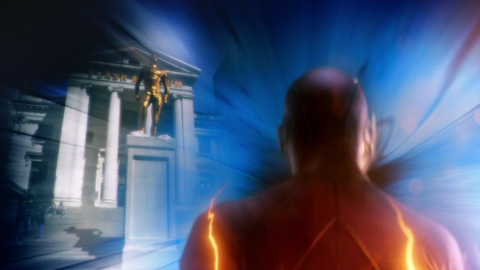 Early on in the season-five premiere, Nora mentions The Flash Museum, which first made its debut on the show in season one when Barry ran through the time stream and saw future events unfold.

As this has also been a long time-fixture in the comics, we’ve always known that The Flash Museum would one day appear on the show in a permanent capacity, but what we didn’t know is how this would happen.

However, during this conversation, Nora also mentions that Dexter Myles is the founder, someone who we last saw in season one (again!) as the owner of the Central City Museum. Presumably, Myles will eventually convert the regular museum into a speedster homage, perhaps because of Barry’s upcoming disappearance in 2024. 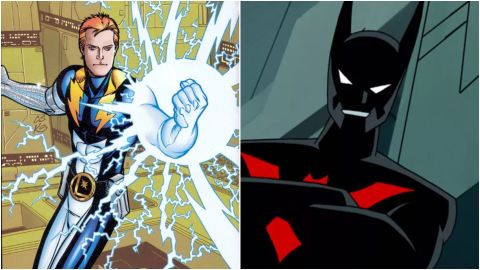 While eagerly discussing how awesome her superhero father is, Nora mentions that “Dad’s lightning bolt is way cooler than Lightning Lad’s” in a seemingly throw-away line that could have huge implications in later episodes.

Although he’s yet to join his fellow teammates on Supergirl, Lightning Lad is a founding member of the Legion of Super-Heroes, a group who fight crime in the 31st century.

When you take into account that Nora also uses the word “grife”, a futuristic curse word often used by the Legion, it seems likely that she’s fought alongside them or even became a member at one point after travelling to visit them in the future.

Oh, and “Schway”? That’s another word which hails from the future, connecting Nora directly to the Batman Beyond series which features a new hero called Terry McGinnis who’s being trained by an ageing Bruce Wayne. 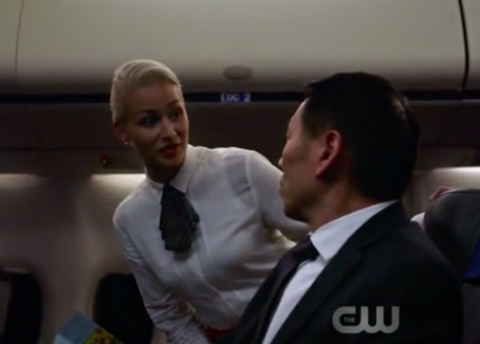 Ever since DC Comics rebooted their most popular titles under The New 52 lineup, the number 52 has popped up time and time again in the ArrowVerse, most notably in the regular snippets of Channel 52 News that often play in the background of the various shows.

This week, the flight that The Flash and his team fight to stop from crashing is numbered 5201 and that moment where they phase the plane through a bridge is directly lifted from The Flash #3 (2011), which also happened to be part of The New 52. 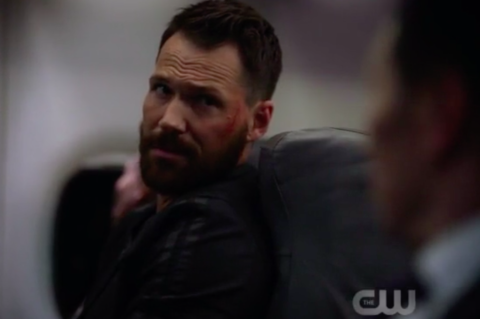 The eagle-eyed among you might have also spotted that Gridlock’s seat on said flight is labelled “DC”, because why the hell not? 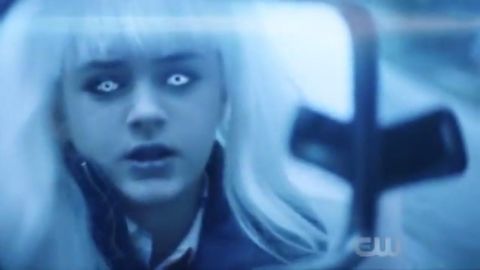 One of the biggest mysteries left over from the season-four finale was how Caitlin Snow developed her Killer Frost persona as a child before the particle accelerator exploded. While this will continue to be a significant plot thread for Danielle Panabaker’s character in season five, the premiere episode might have already revealed the answer to this question.

At the end of the episode, Caitlin discovers that her father’s death certificate was faked by a doctor called Cameron Mahkent, hinting that her good old Pa might still be alive.

In the comics, Mahkent is a supervillain called The Icicle who possesses the same kind of powers as Caitlin. Could it be that Mahkent is actually Caitlin’s father and she therefore inherited her icy gifts from him? Without The Thinker’s cognitive abilities, it’s hard to say for certain, although this would be a mighty big coincidence if the two aren’t related somehow.

The CW airs The Flash in the US every Tuesday at 8pm ET. Sky One airs the show in the UK.

Mom Charged with Murder After Falling Asleep on Top of Baby