Rachel Brosnahan’s Midge finally got her big break as a stand-up comic in Season 3 of “The Marvelous Mrs. Maisel,” backing up popular crooner Shy Baldwin (Leroy McClain) in Vegas, Miami, and Harlem’s Apollo Theater in 1960 — and all this results in an upscale wardrobe change for Midge. “It’s a pretty big transitional season, I think, and it’s very much about performance and her look as a performer [in] different environments,” said two-time Emmy-winning costume designer Donna Zakowska, who’s currently writing a book about the Amazon Prime Video series.

In the first two seasons, Midge’s look was modeled after the movie star glamour of Audrey Hepburn and Grace Kelly. But, in Season 3, with her career moving beyond New York, her look becomes more theatrical. Staying elegant was too tasteful, according to Zakowska. “We’re still dealing with the issue in this period that female comedians are not very glamorous,” she said. “It’s just the beginning of a female defining herself in this way of being attractive yet doing comedy. What I had to do was develop an idea of her as a female comedian. It’s a comic beauty that I like to create [for Midge]. Her glamour is much more complex and, in Season 3, we’re trying to discover what that is. It’s more of a feminist version of the sexuality.”

For the opening USO army show in New York, Midge enters wearing pants, boots, and a jacket in an ode to Marilyn Monroe’s look during her USO tour of army bases in 1954.  It’s a sexy toughness that Zakowska liked: “I lightly transferred the reds and a little more color,” she said. 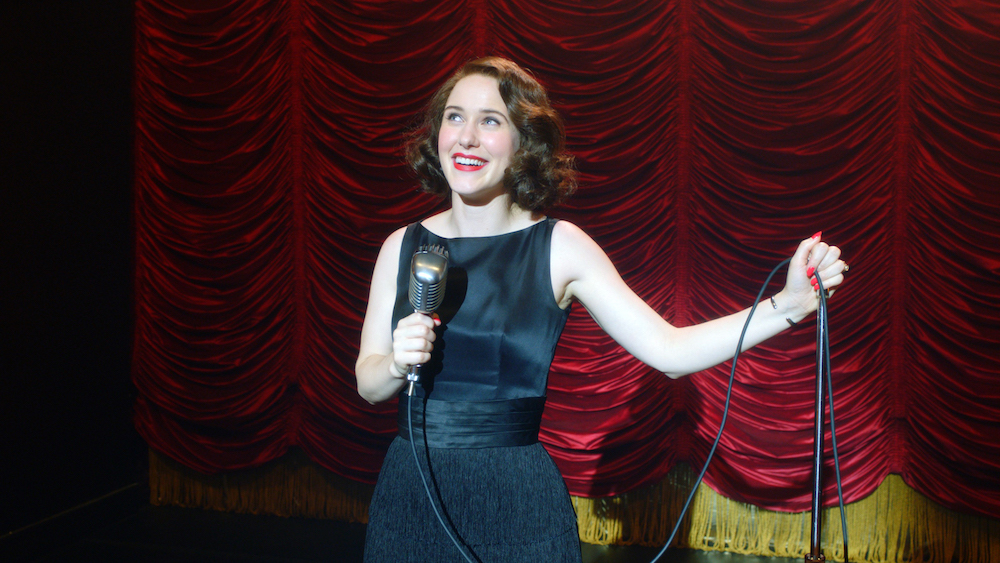 But for her comedy act, Midge changed into a colorful outfit comprised of a blue dress, white gloves, and a red bow. “The second look was from a very small photo I found of a woman walking across the stage in a USO show,” continued Zakowska. “What I wanted to do was make that dress pretty and attractive and also patriotic. It became a joke about Midge looking like a living flag.”

However, showrunner Amy Sherman-Palladino and executive producer Dan Palladino added a nod to Monroe in the script by having Midge’s skirt fly up. “So we had to do a lot of work with blowing it up with different fans just to [pull off] that whole trick,” Zakowska said. “Midge supplies a naive appeal that I always try to bring out in the clothing.”

In Vegas, meanwhile, Midge is back to wearing a signature black dress but with a twist: “We have that crazy look where we suddenly do something strange to her hair, and so in that black dress I actually put that element of that large bow on her shoulder,” Zakowska said. “So it’s slightly more comic. But I’m beginning to infiltrate into the black palette a little bit of color.”

From there it gets more heightened with Midge’s dramatic entrance into The Fontainebleau in Miami. She saunters in wearing a gorgeous blue and pink floral dress with a cape and a large straw hat. “At first, I didn’t plan this,” the costume designer said. “I didn’t know how long the walk would be. But when we played with it in rehearsal, I knew absolutely that this was going to be the best arrival dress. And the pattern was pretty bold, but I wanted to put a bit of her pink vibe, as I usually do. So we actually found the thinnest silk fabric I thought would work, and then we painted into it. For the hat, we made the flowers out of silk and painted them. It was an important moment for her about making it, and I wanted to add to the theatricality with the cape.” 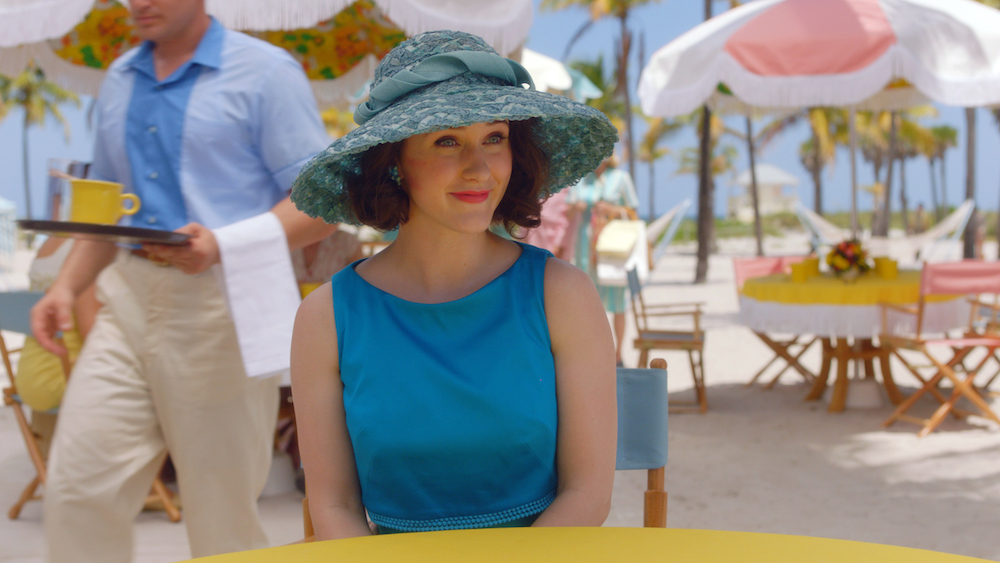 The hat was an important signal for its importance in the early ’60s as a greater stylistic profile (influenced by French fashion). And Zakowska will playing more with the silhouette of hats in Season 4. “I’ve been doing some research for whenever we do get back and I feel like the hat is going to be a very big part of the vocabulary to pursue,” she said.

Not surprisingly, Zakowska saved Midge’s best look for the climax at The Apollo with a glowing pink silk outfit. “Amy really wanted to make a break and return to pink in a performance dress,” she said. “I knew this was going to be a big stage, and it had to be incredible under lights, and even more of a heightened theatricality than I’ve asked from other performance dresses. And we did a lot of beading on it.”

But the pressure to entertain the Black audience unfortunately brings out the worst in Midge: “There’s nothing worse than when you dress for something, and you feel absolutely prepared, and absolutely on point, and then in some way that twists into a moment that isn’t appropriate,” Zakowska said. “And so that’s why that dress became so important because it was going to define the end of the [final episode of Season 3].”

My Son Said THE WORST Thing To His Teacher! Plus, Thanksgiving And ENCANTO Review! | Perez Hilton

Where can vaccine passports be used? Poll says where Brits want them

Brad Pitt Is a 'New Man' at This Stage in His Life: He's 'Happy, Loves His Kids'