If you’re naming some of the top sitcoms of all time, it wouldn’t be long before you got to The Office. It was one of the funniest shows on television for the better part of a decade. Like every great show, it was anchored by great performances from actors who became very successful afterward. One of the best performers on the show was John Krasinski.

While Krasinski did an incredible job on the show inhabiting a character, there is one moment where he let the mask slip and let his real self shine through. Let’s take a closer look at the one time Krasinski broke character as Jim Halpert in season four — though unless you were watching really closely, you probably missed it.

Who is John Krasinski?

According to Biography.com, Krasinski was born on October 29, 1979 in Newtown, Massachusetts — the same town as fellow Office actor B.J. Novak. Krasinski first came to fame starring as Jim Halpert on the U.S. version of the hit sitcom The Office.

From there, while maintaining his role on The Office he began transitioning to film as well. Krasinski starred in films such as License to Wed alongside Mandy Moore and Robin Williams and Leatherheads alongside George Clooney.

Krasinski is also a director. He’s directed the films Brief Interviews with Hideous Men, The Hollars, and A Quiet Place.

A Quiet Place was Krasinski’s biggest hit as a director — it also starred his wife, Emily Blunt, and led to a sequel scheduled to come out this year. Moving back to television, in 2018 Krasinski claimed the titular lead role in the Amazon drama Jack Ryan.

Who is Jim Halpert? 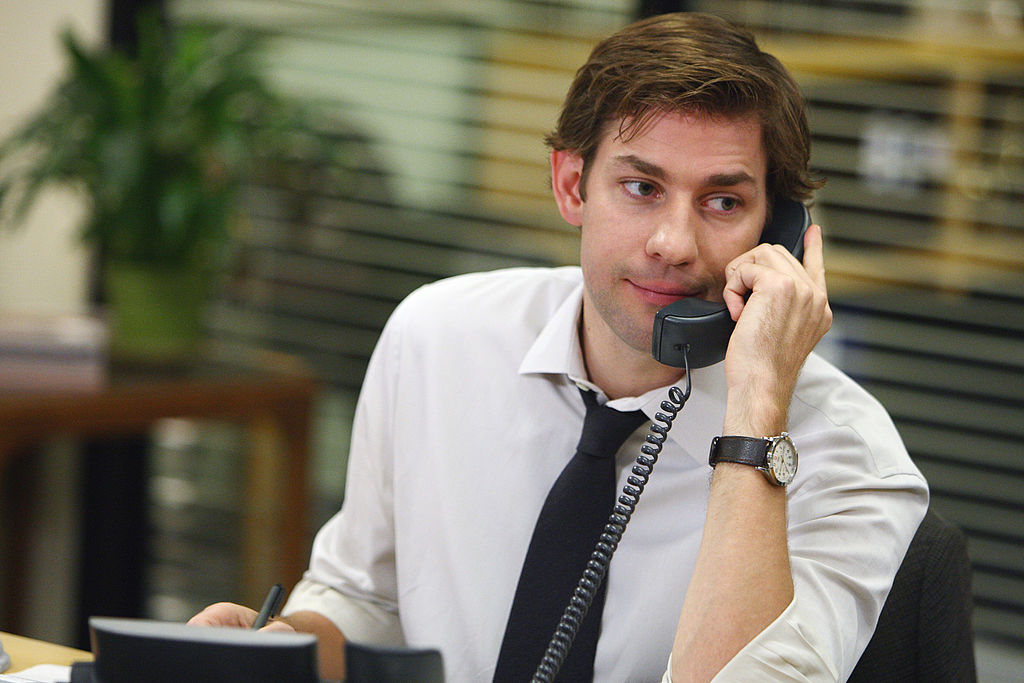 Jim Halpert was the character Krasinski portrayed on The Office. Halpert is a salesman for paper company Dunder Mifflin.

At the show’s outset, Halpert was the show’s lovelorn hero, pining for the affection of office receptionist Pam Beesly (Jenna Fischer). Halpert is forced to put up with the antics of the company’s bumbling, inept manager Michael Scott (Steve Carell) while also engaging in a prank-filled rivalry with deskmate Dwight Schrute (Rainn Wilson).

Krasinski’s portrayal of Halpert was universally acclaimed. Fans were able to both laugh and commiserate with Krasinski’s wisecracking, corporate everyman. He remained with the show for the entirety of its run on NBC.

The show was so funny that there are plenty of outtake videos available online showing the cast cracking up at each other. Luckily, the show wasn’t aired live, so any time the actors broke character they could simply film another take. There’s one time Krasinski broke character that made it to air, however.

In the season four premiere titled Fun Run, Michael accidentally hits Meredith (Kate Flannery) with his car. After sitting an episode out, Meredith returns with a cast in the episode Launch Party several episodes later.

During the episode, she asks several of the characters to sign her cast — hilariously pulling up her dress in a revealing, inappropriate way that Office fans had come to expect from Meredith. One character, however, broke the fourth wall when signing the cast, and it was Krasinski.

According to BuzzFeed, when Halpert signs Meredith’s cast, you can clearly see he’s signing his own name of John Krasinski rather than Jim Halpert. No one but the most eagle-eyed of Office fans would catch it, but there it was, as clear as day.

It’s unclear whether Krasinski was pulling an actual prank — which would be extremely meta of him — or if he just signed it sincerely in error. But either way, it’s a great piece of trivia about the show.

Sofia Richie Shows Off Super Toned Abs During Day at the Beach!