Robert Eggers and Jarin Blaschke are one of those director-cinematographer teams that can make it hard to sense exactly where to draw the line between each filmmaker’s contribution. Eggers is a former production designer with a pinpoint graphic sense of what’s in frame, and for the period feel that fuels his scripts. However, he relies on his cinematographer’s intimate knowledge of his vision to storyboard and help find the unique look, feel, and visual language of his films.

Like “The Witch,” the process of creating the visual language of “The Lighthouse” was a long, evolving dialogue between the two friends. IndieWire talked to both — Eggers on the Filmmaker Toolkit podcast, Blaschke at the cinematography film festival Camerimage in Poland — to learn more about the ideas, decisions, and execution that resulted in one of the year’s most cinematically inventive films. 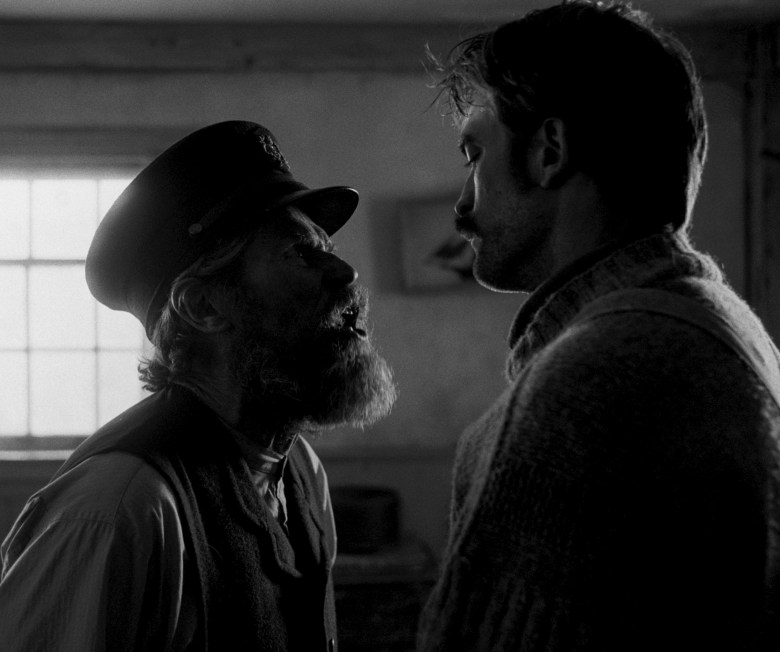 Williem Dafoe and Robert Pattinson in “The Lighthouse”

Blaschke: It seemed like a great shape to depict the story and then it has another secondary benefit of transporting you: It’s claustrophobic, there’s a giant phallus in it, and there’s only two men. And even if you put them in a two-shot, you’re scrunching them to put them in that frame; they barely can fit. The frame is right at their backs in the two-shot. In a real space, if feels kind of ridiculous because the room does have space, but we’re not showing it, so the room feels smaller. Even in a wider shot, the ceiling starts coming down because of the shape of it.

We also have a lot of up-and-down vertical shots, booming and cable shots going up and down the stairs. “The Lighthouse” is more close-up oriented than “The Witch,” too. It’s just a better format for close ups — not just faces, but details. 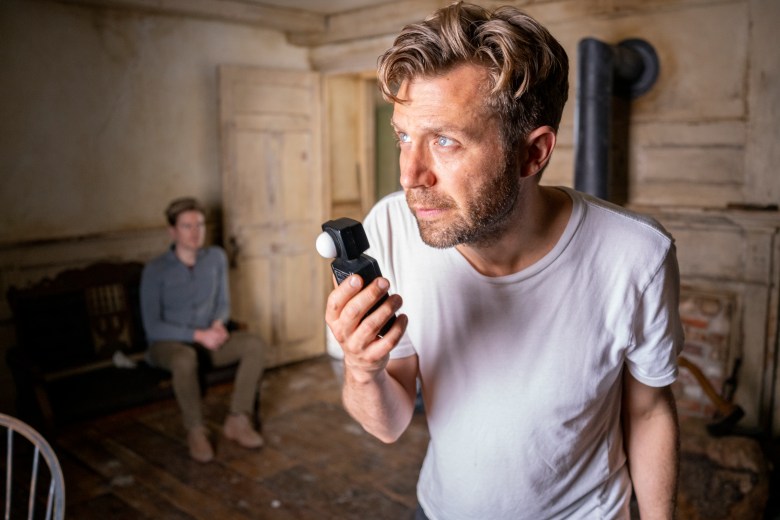 Cinematographer Jarin Blaschke on the set of “The Lighthouse”

Eggers: And from the beginning, how do we create a black-and-white look that’s special and will give the most texture and will be the most interesting to this story? So we shot on black-and-white negative because there’s a way in which the blacks just bottom out in a way you can’t quite get by shooting color and doing it in the DI.

Blaschke: Film is our palette of choice. When they were doing the budget for both “The Lighthouse” and “Witch,” we didn’t know which would go first. Rob asked me, “Can we get close [to what we want] through digital means?” I said, “No.” Then “The Witch” happened. That was ideally going to be shot on film — it wasn’t — and it was a relative success, to put it mildly, and he got the courage to push for shooting on film. Even in the script, before he introduces the characters there’s a single line: “Must be photographed in black-and-white 35mm film, aspect ratio 1.2: 1.” Just to calibrate your mind as you read it.

Kodak makes Double-X and Tri-X. Tri X is actually a better film stock; the latitude is probably similar, it just has a smoother, sharper image, but they only make it 16mm. They’d cut it for us in 35mm, but they would charge a dollar a foot. For our film, the kind of broken-down look, the Double-X was actually more suitable, so we let the Tri-X go, but man, I would love to shoot Tri-X on a movie. 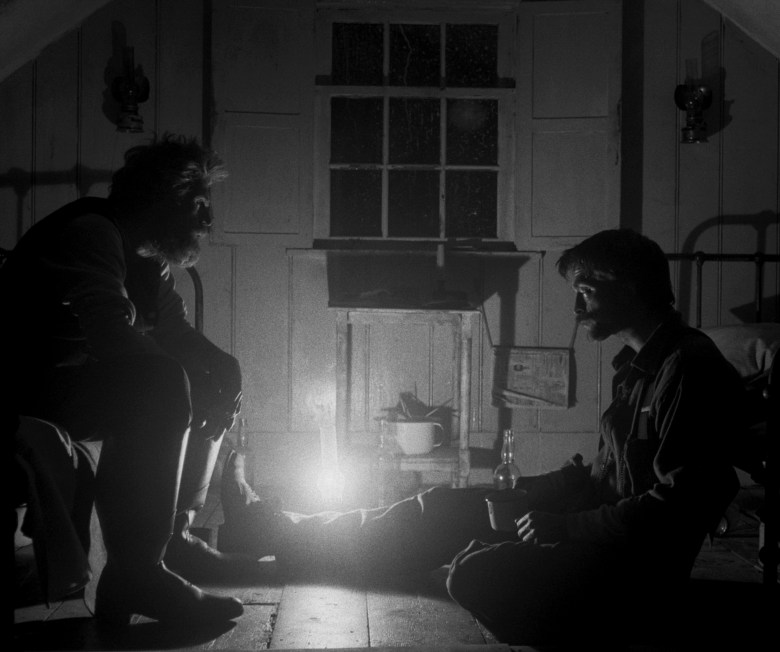 Blaschke: Kodak rates Double-X at 250 [ASA measures how fast, or light sensitive, a film stock is — the lower the number, the more light required to achieve proper exposure], but I tend to consider that a bit optimistic. They’re trying to market their film, so they put the highest speed they can get away with. I pulled a half stop and called it 160 in doing my calculations. We had a custom filter that cut about a stop out, so you’re dealing with ASA 80. 35mm color film is 500, and Alexa is 800, so it’s just a whole different discipline.

I also prefer bounce light, which is very, very inefficient. On top of that, the lenses we used have a lot of character, but they are different depending on where you set the aperture. If you shoot it wide open [letting in the maximum amount of light], it just goes too far. It’s smeary.

So you can’t have a very wide aperture, the film stock isn’t very sensitive, we put a filter on top of that, and bounce light is inefficient. By the time it gets in a window, it’s greatly reduced so lighting the interiors required a tremendous amount of light. We had every big HMI in Nova Scotia going and we stole a lot from Toronto.

Eggers: It was also a challenge, because black-and-white takes so much more light. Even if it’s a scene with a single kerosene lamp, the light bulb that is pretending to be the flame of that lamp was blindingly bright and often time people were wearing sunglasses on set when we were shooting night interiors.

Weathered Texture and a Special Filter 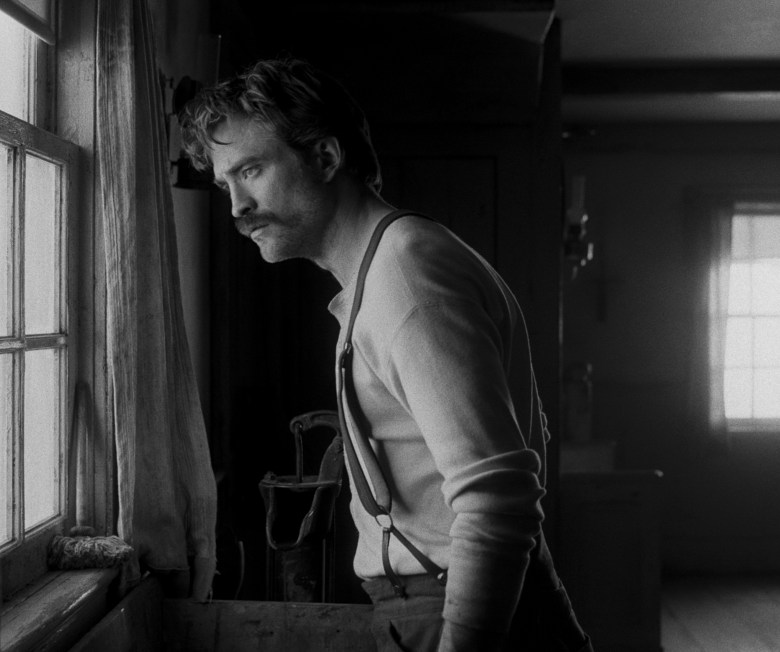 Robert Pattinson in “The Lighthouse”

Blaschke: Rob loves texture. He wants the sets to have water stains and filth. In both movies, he’s had the floor redone, and you don’t see the floor that often.

Eggers: We had a custom filter made by Schneider that created more of an orthochromatic look so you could get all the texture on Dafoe and Pattinson’s faces.

Blaschke: It’s a cyan filter, photographically pure. No red light gets through; it just discards any red light.

Initially, a lot of our references were early photography, and early photography has a kind of emulsion that doesn’t see red light. In fact, the earliest emulsions didn’t see green light even, just blue light, so that renders the color world in a very specific way. With 19th-century photographs, you can have a sunny day and the sky still looks blank white, no clouds, because it’s blue and blue becomes white.

Things that have a lot of red, like caucasian skin tones, become much darker and it just amplifies variations within a red tone. Like this brick wall [pointing to a wall in the restaurant where the interview took place], you’d have very dark bricks, different shades of brick would be emphasized. And if you have ruddy skin, or little blood vessels, or a blemish, it just amplifies it, which just takes you to a palette from another time. It’s a little peculiar, and hopefully it’s transportive.

Eggers: It proved complicated for costume and production design because it renders colors differently. These are all things that, in the middle of the last century, people knew how to do this. We were having to research.

Blaschke: The way we are shooting — getting this hard, very severe, unfriendly, blank white sky — it’s almost a conflict sometimes because it tends to brighten skies. If you have storms, which were a big part of this film, you need it to be dark. That became tricky where you actually had to put in a grad [filter] to make a dark sky, because in general we wanted it to be as austere as possible.

But it was worth the headache, because Rob and the art department would get the texture right on set, and then I’m amplifying it with the filter while achieving this distinctive old-photography look. 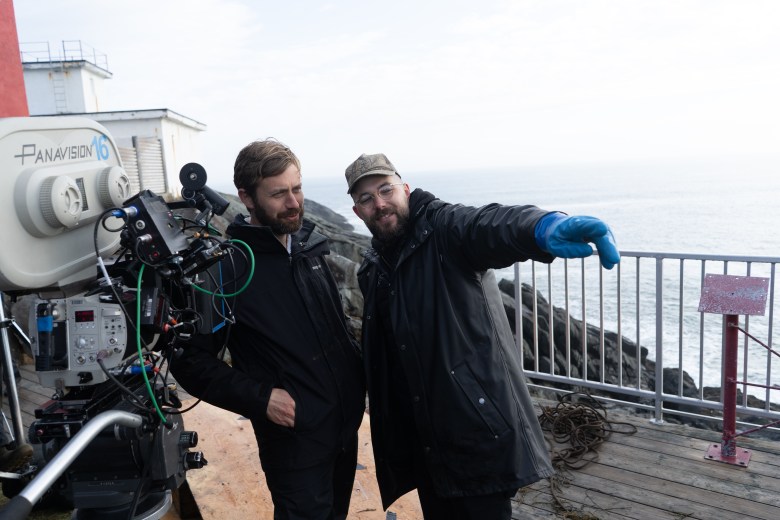 Eggers: Look, if anybody likes the cinematic language of this movie, or “The Witch,” it’s definitely a collaboration between me and Jarin. I’m totally not Scorsese saying, “This is what we’re shooting, light it, and shut up.” It’s very collaborative and there’s many specific shots that I write into the screenplay, but we’re working on the language together.

Blaschke: For me, a lot of it is instinctual the way we come together with our shots. I’ll just read the script, first time for story, but I just keep reading it over and over and over. I have more time with Rob; I have the scripts earlier than I would if I didn’t know him. A more complex idea comes to my head, and if I don’t have all the shots yet, I’ll just read through the script again. I tend to read it in order as the audience would watch the film, as opposed to jumping around, or do the most difficult stuff first.

I can’t speak for Rob, but our stuff tends to just mesh together. I’ve never asked about the mystery of that, but for me, I don’t only think about shots, but cuts. “What is likely the shot before? What’s the shot likely after?” Scenes do get mixed up and scenes get taken out, but I do my best to play it in my mind like an animation.

I think about each cut as valuable as each shot. If this shot ends at this point, what is the most effective image after that, and don’t move onto a new shot unless you actually have something new to say. So if you’re kind of playing within a certain idea in a scene, stay there. Stay in shot-reverse-shot, or stay in the two-shot. If the scene has a new beat, then you can do something else, but I don’t give myself permission to do something else until that thing is finished. 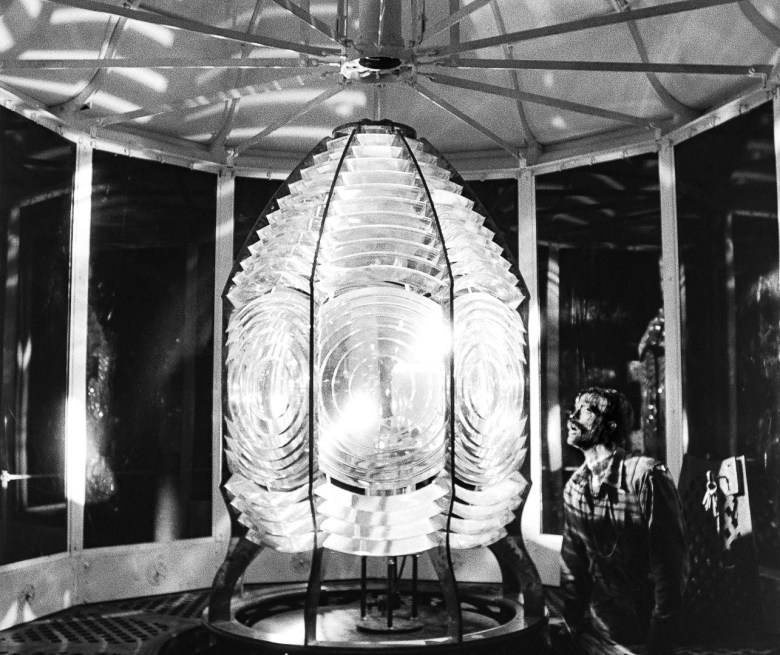 Blaschke: I think I’m pretty imaginative with the camera, but lighting-wise much less so. I need a reference in real life. In the script it says, “He’s enchanted by this marvelous enchanting, bewitching, swirling patterns” of the lighthouse light, and you go to a real lighthouse and that’s actually what it does – the machine room underneath has these swirling patterns, almost like you are underwater – so it’s like, “Oh, thank God.”

You have the rotating lens, that was built. And while I might not have been able to invent these lighting patterns, I know that a light at a certain angle, through a certain part of the lens, is going to make a pattern. You have to play with it a little bit, what part of the lens to project the light.

A real lighthouse at the time would have been an oil flame in the middle and the lens just amplifies it. At these museum lighthouses that are still working, it’s just a 60-watt bulb in there, but for our slow film stock it needs to be bright light. We had a 6,000 watt HMI bulb, which was exceptionally bright. It would throw light across the bay to the town and it was going into people’s windows at two in the morning, which I felt bad about, but when they first turned that on it was enchanting, especially when it was that bright. Any little mist in the air puts out these beams. It’s grainy, but there is detail in that highlight. If we shot digitally, that wouldn’t be there.

Birmingham stabbing: Girl, 15, and woman, 28, arrested after man is knifed to death by busy road in