Sundance 2021: Not everything is as it appears in this doc about two people exploring pre-marriage polyamory 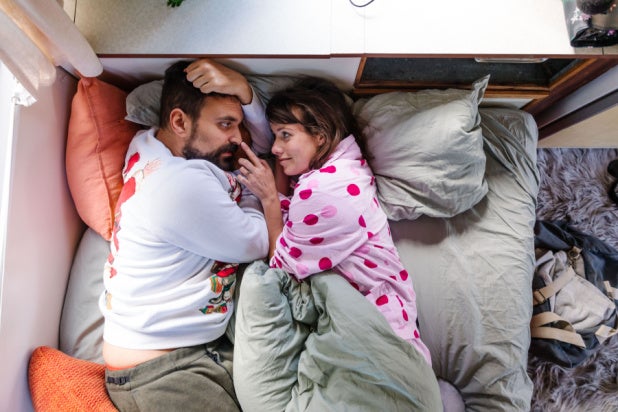 The likeably awkward Ollie feels that he missed out sexually during his 20s, and he sees the next 12 months as his last chance to explore before committing to one person forever. Zoe, a beguiling extrovert, is game. So they establish a “monogam-ish manifesto” and set out to “make the most of our bodies while they’re still stretchy.”

When Zoe goes out of town for work, they plan on even more freedom. But because they film nearly everything they think, say or do, each is always aware of the other’s experiences. In fact, that’s part of the manifesto: talking about it all, and hiding nothing. This goes for the occasional flirtations, the online dating and the bondage-themed house parties. It also goes for Siobhan, Ollie’s new girlfriend, and Tom, Zoe’s new boyfriend. Eventually, Zoe meets Siobhan, Ollie meets Tom, and our central twosome explores threesomes.

Naturally, there are a few naysayers in their midst. Ollie’s best friend Wilbur, in particular, is appalled by the idea that Ollie feels entitled to juggle both a girlfriend and a fiancée. And his funny mom, Shirin, is mostly just confused. When he asks if she knows what an open relationship is, she confidently nods. “When you live together!” she says, with what she assumes is liberal-minded support.

Meanwhile, Ollie and Zoe eventually discover what his mother could have told them from the start: The path they’ve planned is more complex than they expected.

“Being polyamorous means choosing to reject monotony,” Ollie explains to the audience. “That means we have to negotiate jealousy instead. Which is just an emotion you can train yourself to overcome. Right?”

Actually, he’s not entirely wrong. There is jealousy, and it is overcome. And often in very amusing scenarios, as when a deeply uncomfortable Ollie FaceTimes Zoe while she’s getting intimate with someone else. “So, what do you do?” he asks this naked and otherwise occupied stranger. “If you stopped talking, that’d be great,” the guy replies.

But much to both Ollie and Zoe’s surprise, love proves more cumbersome than envy. Even as Ollie works hard to keep boundaries around his relationship with Siobhan, Zoe finds herself drawn more and more deeply to Tom, another director. (Cue the jealousy again.)

And it is here that we have to note — consider this a spoiler warning if you don’t want to know more — that the couple we’re so invested in is, indeed, keeping secrets. And not from each other, but from us, the audience. The reason the movie works so well in the first place is because Ollie and Zoe are open and engaging enough to create real intimacy between themselves and the audience. So when it turns out that we’re being misled in a very significant way, some viewers may feel genuinely betrayed.

But the impact of the last-act reveal also speaks to the considerable strength of the filmmakers, including not just Lucks but his gifted co-writer Natalie Medlock. Because although the movie concerns itself with love and sexuality, its true subjects are vulnerability, trust and self-knowledge.

Anybody already watching a film with this one’s (needlessly unwieldy) title is unlikely to be shocked by sex between consenting adults. But it does become increasingly difficult to withhold judgment on the sheer volume of exhibitionism.

Ollie shoots everything, to the point where it feels uncomfortably as though the two are living more for the image — and for us, their eventual audience — than for themselves or each other. “Try to be with me and not with that,” Zoe says at one point, indicating the camera. But he can’t, and ultimately neither can she. Are they the same people if they’re not documenting themselves? Is anyone? Lucks uses his lens like a mirror, and in the end, you may be surprised by what you see.

Aries weekly horoscope: What your star sign has in store for January 3 to 9