Thor: Ragnarok director Taika Waititi is tackling Nazis in his upcoming World War II satire Jojo Rabbit, and he’s confirmed it will “piss off a lot of racists”. Yes please.

The synopsis sounds as bizarre as you can imagine, following a young Hitler Youth recruit whose imaginary friend takes the form of Hitler himself. However, after he forms a bond with a Jewish girl, he comes to appreciate their shared humanity.

Waititi has just begun shooting the project, and gave us a little teaser in this amazing press statement (via Collider). 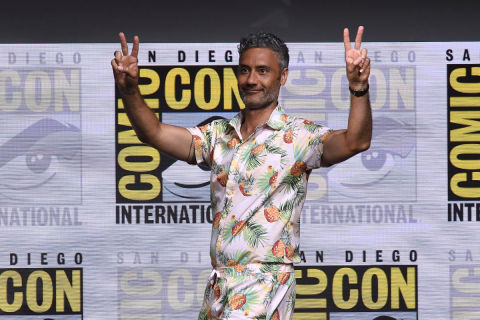 “I’m stoked to begin shooting my anti-war satire,” he said. “We’ve assembled an incredible cast and I couldn’t be more excited to finally ridicule Nazis and their beliefs.

“This film is going to piss off a lot of racists and that makes me very happy.”

Well, we are certainly invested in this one.

Waititi has assembled a pretty stellar cast to boot for Jojo Rabbit, with Scarlett Johansson playing a Resistance fighter against the Nazis who is also the mother of the girl.

Pitch Perfect‘s Rebel Wilson will play an instructor at a Hitler Youth camp, while Oscar-winner Sam Rockwell will play the man running the camp.

No release date in the US or UK for Jojo Rabbit has been set yet.

Love Island Australia 2021: Who are the islanders and when does it start in the UK?

‘The Big Bang Theory’ and ‘Young Sheldon’ Crossover Is Coming