Fox’s coverage of the Green Bay Packers’ 34-17 victory over the San Francisco 49ers on Thursday Night Football topped a busy night in primetime, which saw its schedule tweaked by ongoing Election 2020 coverage along with the return of ABC’s The Bachelorette and season premieres of CBS’ comedies Young Sheldon, Mom and the series debut of B Positive.

Meanwhile, NBC aired the Superstore episode (0.5, 2.31M) that said goodbye to star America Ferrera. The episode itself slid a tenth in the demo compared with its Season 6 premiere the week before.

TNF grew two tenths in the demo and rose in viewers compared with last week’s less desirable Atlanta Falcons-Carolina Panthers matchup. It gave Fox the easy win overall on the night in early Nielsen Live + Same Day numbers, which will adjust in the finals as per usual with live sports.

ABC was second in both metrics Thursday with The Bachelorette (1.4, 5.32M), with the season’s fifth episode featuring a switch-out of bachelorettes — from Clare Crawley to Tayshia Adams. That drama helped boost the two-hour episode past its season premiere numbers of last month.

Returning to the fall lineup last night after lockdown-related delays was CBS’ Thursday comedy slate, led by the Season 4 bow of Young Sheldon (0.7, 6.54M), newcomer B Positive (0.6, 4.96M) and the Anna Faris-less Season 8 debut of Mom (0.6, 4.73M). Both Young Sheldon and Mom were down from last the last season openers to hit Live+SD series lows.

Thursday’s primetime once again was impacted as the broadcast nets continued to cover the Election 2020 results, which last night saw Joe Biden overtake Donald Trump in voting totals in the key swing states of Georgia and Pennsylvania. NBC took two hours of primetime with its coverage (0.4, 1.91M), while ABC (0.5, 2.74M) and CBS (0.3, 1.99M) went with hourlong specials at 10 p.m. ET. 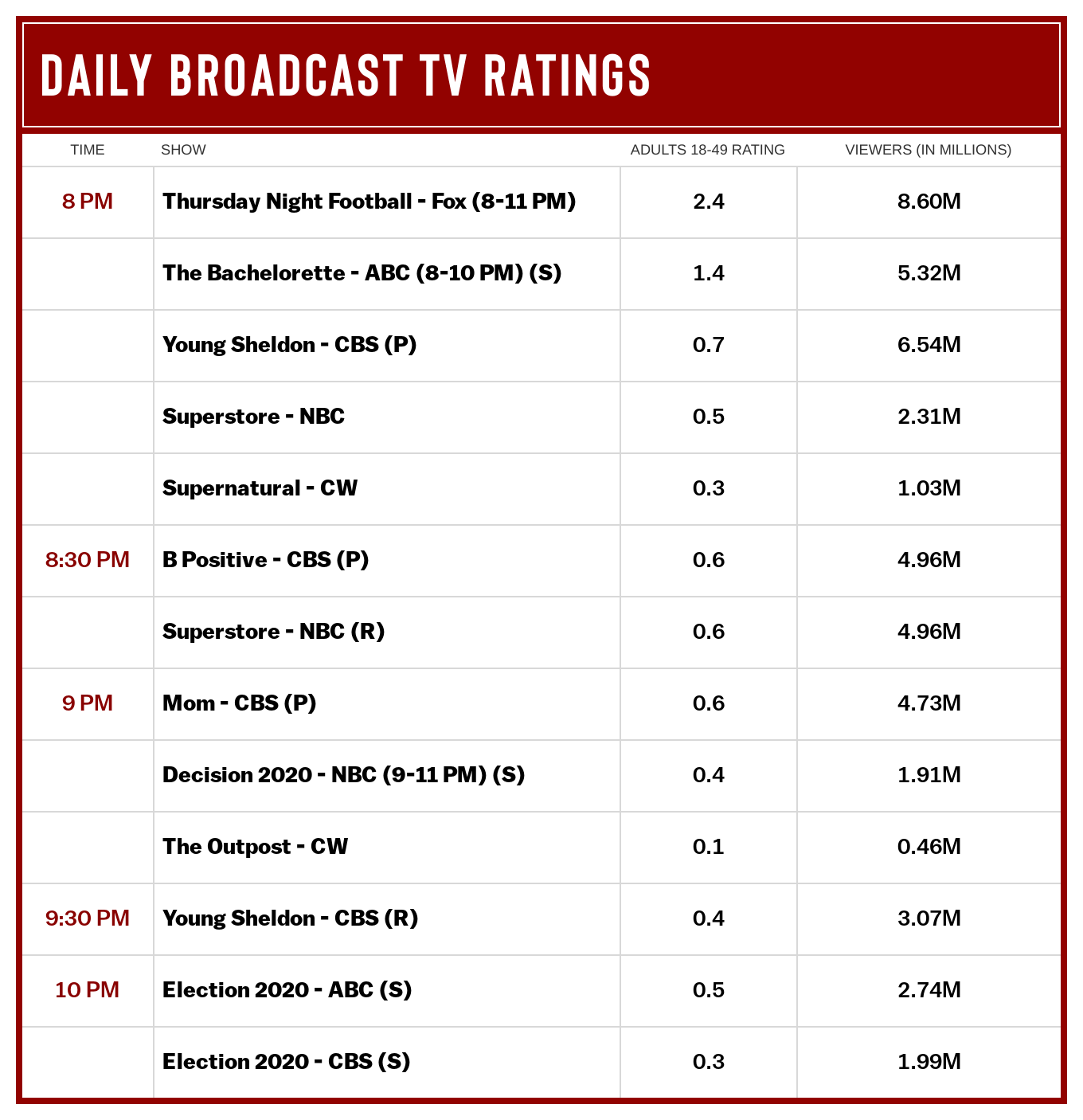