Home » TV & Movies » Timothy West: I’m the grumpy one, not my wife who has Alzheimer’s 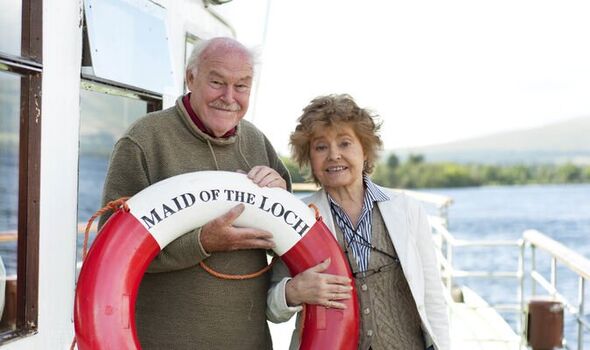 Tim, 87, said that “Pru enjoys life” and that they fill their days with reading, music and going to the theatre and opera. The star of stage and screen also paid tribute to the Duchess of Cornwall – a good friend of the couple – and said he is “delighted” Camilla will become Queen. Tim and Pru’s love story captured the hearts of the nation when they documented life with her illness during 10 series of Great Canal Journeys.

Pru, 89, has had Alzheimer’s since 2014, although she still recognises Tim and her family.

Tim spoke to Saga Magazine about their life, saying: “There isn’t much serious conversation going on because she can’t cope with that.

“But we talk and we read and listen to music, and go out occasionally to the theatre and opera.

“We make sure she has lovely things to do.

“Pru enjoys life, which is wonderful. She lives in a nice house in south London, with a nice husband and a family she sees. We have a lovely garden she adores.

“I am fortunate that I don’t have to spend a lot of time cheering Pru up. She is the cheerful one. I am the grumpy one.”

The pair have a mutual love for the arts, including theatre and poetry, which they love to recite.

Tim says Pru can still remember dozens of poems, and that he only has to “remind her about a certain subject and then she’ll come up with a poem”.

Tim recited a piece by Wordsworth at the wedding of Prince Charles and Camilla, and he told how happy he was at the news that she will be named Queen when Charles
is crowned.

He said: “I’m delighted. She is a wonderful person and has made Charles very happy, there is no doubt about that.

“She has a wonderful ability to relate quite naturally to people, particularly to children.

“When we get to the age she is, it’s not always easy to be so generous and kind to everyone.

“She has done some wonderful work with schools, and involved herself in ­children’s learning and education.

“And I know it’s something that Prince Charles very much appreciates.”

They even live with two of their great- grandsons and their parents, something that was “a great comfort during lockdown”, says Tim.

One of their offspring, Sam, has also ­followed in their footsteps, becoming an actor and starring in All Creatures Great And Small.

Tim says, however, that it was quite a shock to realise his son was old enough to play grumpy vet Siegfried in the Channel 5 show.

“I’d been thinking of him as a juvenile.”

Tim himself shows no signs of slowing down and is featuring in the latest season of Gentleman Jack with Suranne Jones.

He is living life to its fullest but as a ­gentleman of a certain age, the actor feels that older people should be better represented in Government.

He said: “There ought be a Ministry for the Older Generation, which is open to all sorts of questions and arguments and desires and requirements so that our fears and worries can be addressed.

“It would be good to know that what older people say is taken seriously and that someone is listening.”

● You can read the full interview in Saga Magazine, which will be available this week

'Succession' Season 3 Finale: What Happens to the Roys in Episode 9?