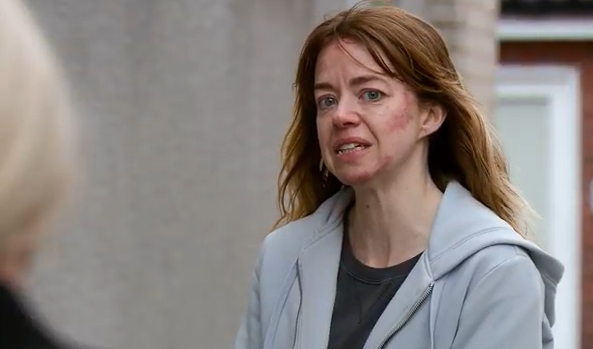 It’s bad enough finding out that your husband betrayed you and then being involved in a car crash which led to his death but Coronation Street’s Toyah Battersby (Georgia Taylor) is about to realise that things can only get worse.

With police already establishing that the car’s brakes weren’t used just before the collision, the suspicion on Toyah is already high.

Given that they were involved in a colossal row before the impact, it wouldn’t be too far of a reach to consider murder as a possibility.

Unless of course you actually know Toyah, in which case it’s pretty hard to believe she’s a killer.

However, next week, the police feel they have enough to make an arrest, believing her to be guilty but can she persuade them that she is innocent?

Or will she be charged and be heading for a murder trial?

Her loved ones rally round her, with Adam Barlow (Sam Robertson) vowing to represent Toyah.

But as information comes to light through the investigation, doubts may be raised within the community.

This is a street that has seen many an innocent person stand trial for murder and violence.

And not everyone is always in their camp.

Toyah is already deeply distressed about recent events so how will she cope with this new ordeal and the prospect of prison?

Tonight, viewers will see how the crash played out as the soap airs a stunt which lead to Imran’s death.

It will be the last time that Charlie de Melo appears on screen as the ill fated lawyer.

As a dramatic week ends in disaster, the real heartache is only beginning as the consequences couldn’t be more far reaching for Toyah if they tried…

Prince William & Kate Middleton split up when he went on a Greek yachting trip with an all-female crew, new book claims

‘Days Of Our Lives’ Spoilers: Abby Waits For The Paternity Test Results, Theresa Pleads With Brady