Kyle Sandilands has revealed that Trial By Kyle, his Pilot Week TV show for Ten, has been picked up for a full series – and he's not too happy about it.

The KIIS1065 shock-jock broke the news on the Kyle and Jackie O radio show on Monday morning, earning the ire of Ten executives who were keeping the announcement under wraps until the network's Upfronts later this month.

"I got a message yesterday saying that was a secret and I wasn't supposed to tell anyone," Sandilands said on Tuesday morning, after being congratulated on air by Triple M's Grill Team.

He was also asked how many episodes of the series he'll have to film. "Hopefully just one and it gets cancelled," he quipped.

On Monday, during an interview with actress Rebecca Gibney, Sandilands revealed – to his disappointment – that his goofy reality show was Ten's first full commission from August's Pilot Week experiment.

"Channel Ten did that Pilot Week shit and then I was the only one that got picked up. So now I've actually got to do something," he told listeners. 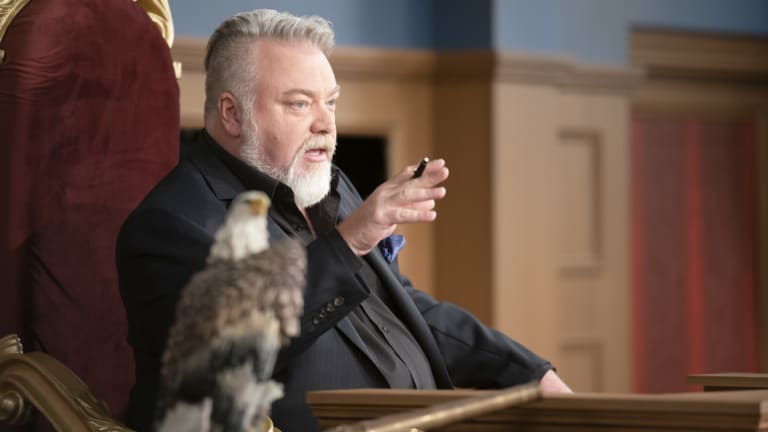 "Not really," groaned Sandilands. "I don't know why I did it. I did it thinking, 'I'll do this, I'll take the money and that's the end of it.' And they're like, 'Good news, Kyle. Yours is the only show we're picking up. Goes to air in February next year.' And I was like, 'ughhhh.'

"Doing this job and then having to go in there and film all that bullshit… I like to lay around resting. I get no rest," he added.

The courtroom reality show, modelled on Judge Judy but minus the legal pedigree, was one of the more popular offerings during Ten's Pilot Week.

Among the shows aired, it ranked first in terms of viewer numbers with 519,000 people tuning in, and earned strong social media attention, both positive and negative.

The episode, sidekicked by original Bachelor winner (and criminal lawyer) Anna Heinrich, saw ex-Big Brother contestant Skye Wheatley attempting to sue the company that organised her botched boob job. She lost, and was forced to issue a public apology.

Ten are yet to reveal which of its Pilot Week offerings are to be commissioned.

"We get that keeping a secret is tricky but we are pretty good at it, so we will be announcing which shows made it to series from Pilot Week at the Upfronts later this month," a Ten spokesperson said.

Regardless, Sandilands dropped a bit more inside info on Tuesday.

"Rove didn't get picked up," he laughed, at the comedian’s underwhelming Saturday night variety offering. "They just told me no one else."

The unexpected reason Vicky Pattison was proud of herself after NTAs

Best Christmas gifts for mum for 2021