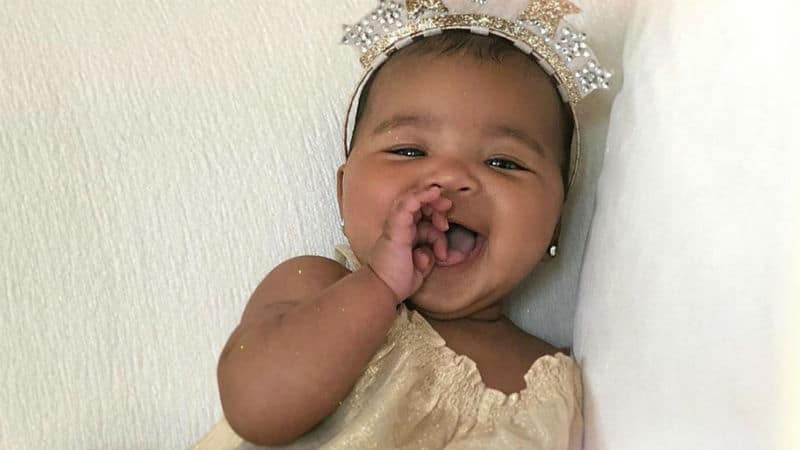 True Thompson is only a few months old but she is already making headlines. As the daughter of Khloe Kardashian and basketball player Tristan Thompson, she has a lot to live up to where the public is concerned.

Last December, Khloe Kardashian finally announced her pregnancy. It had been outed months ago but the reality star wanted to do things in her own time, and that included announcing she was welcoming a little girl with her boyfriend.

My greatest dream realized! We are having a baby! I had been waiting and wondering but God had a plan all along. He knew what He was doing. I simply had to trust in Him and be patient. I still at times can't believe that our love created life! Tristan, thank you for loving me the way that you do! Thank you for treating me like a Queen! Thank you for making me feel beautiful at all stages! Tristan, most of all, Thank you for making me a MOMMY!!! You have made this experience even more magical than I could have envisioned! I will never forget how wonderful you've been to me during this time! Thank you for making me so happy my love! Thank you to everyone for the love and positive vibes! I know we've been keeping this quiet but we wanted to enjoy this between our family and close friends as long as we could privately. To enjoy our first precious moments just us ❤️ Thank you all for understanding. I am so thankful, excited, nervous, eager, overjoyed and scared all in one! But it's the best bundle of feelings I've ever felt in my life! ❤️❤️❤️

April was a complicated month for Khloe Kardashian as she awaited the arrival of little True. It was then that she found out that Tristan Thompson was cheating on her.

Despite her due date being in April, when True Thompson was born in Cleveland on April 12, 2018, rumors swirled that the stress of everything had put labor into motion.

Our little girl, True Thompson, has completely stolen our hearts and we are overwhelmed with LOVE. Such a blessing to welcome this angel into the family! Mommy and Daddy loooooove you True!

Now that True Thompson is almost five months old, there are plenty of photos being shared by her parents. The two appear to be working things out, even taking the little girl on a family vacation.

Khloe Kardashian has wanted to be a mother for years, and she is evidently over the moon to be spending time with True. From outings to vacations, there is plenty of mommy and baby time being had, as evidenced by Khloe’s Instagram.

Keeping Up With the Kardashians is currently airing a brand new season, and Khloe Kardashian’s pregnancy is part of the storyline. True Thompson is part of the next generation of KarJenners, giving her plenty of role models to look up to.

Earlier this year, Khloe Kardashian was pregnant alongside her baby sister, Kylie Jenner, with Kim Kardashian also expecting a baby through a surrogate.

Congratulations My Sweet Kylie! What a magical ride it's been! I'll miss you bumping along with me. Never in a million years did I think we would do this together but it's been that much more special because of it. God is so great!! He had His plan all along! I love you little mama ? love big mama

There are now three little cousins — True Thompson, Stormi Webster, and Chicago West — who will likely grow up the best of friends as the sisters raise their daughters together.

A lot of things surrounding True Thompson have been complicated, but once she arrived Khloe Kardashian unsurprisingly found a new purpose in her life life.

Sharing her little girl with the world has been something she obviously sees the joy in, no matter what the response from the public.

As True Thompson grows up, she will obviously be showered with love from her mom, grandma, and the rest of the KarJenner clan.

She is already getting plenty of attention. Her baby photos have been a huge hit on social media — and it’s not hard to see why!

Keeping Up With the Kardashians airs Sunday nights at 9/8c on E!